JVP, Alison Weir And The Hatred Of The White

By Gilad Atzmon: A month ago, Jewish Voice for Peace (JVP) issued a call for a Herem (excommunication, Hebrew) against the remarkable activist and writer Alison Weir. The call was distributed internally amongst JVP’s chapter leaders and was leaked to me by a few JVP dissenters. The publication of the call led to a massive surge of resentment towards JVP within the dissident movement. JVP was compelled to explain their move. 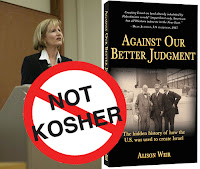 It is sad that JVP missed a great opportunity to amend its ways. Instead of presenting an exemplary case of humanist universal virtues devoted to pluralism and diversity, they responded with a spectacularly gruesome manifestation of Jewish bad behaviour. “Despite her support for Palestinian rights, Weir ultimately does a disservice to the Palestinian struggle for self-determination.” Jews are claiming the exclusive right to tell others what is good for those who are oppressed by their own Jewish State.

I guess Ali Abunimah is busy right now trying to gather another list of 19 Palestinians willing to give this Jewish call for Herem a Palestinian kosher stamp. This is what Abunimah has done for two decades.
I hope that Abunimah has learned his lesson and will be slightly more careful this time. I would love to think that Abunimah has grasped by now  that the crimes that are committed by the Jewish State in the name of the Jewish people and with the support of the Jewish Lobby all over the world may have something to do with the Jews, their culture and their Identity politics. We will know soon.