"Perhaps she is unaware that Elvis made a few bucks on female admiration. Perhaps she’s not even listening to herself." 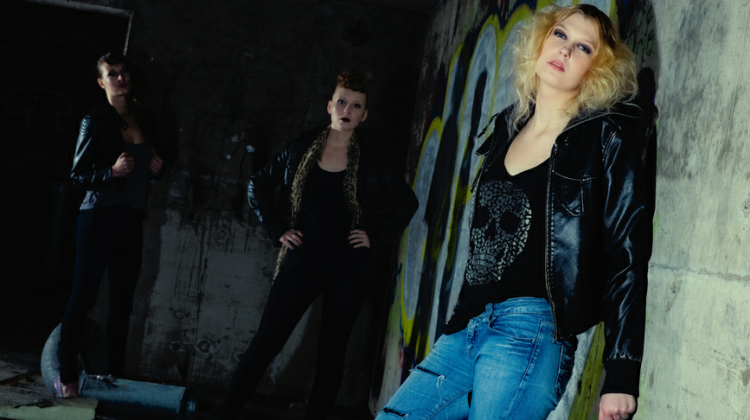 By Jim Muldoon: I can only stand back in awe when I read anything by Nikki Gemmell. Just recently in the Australian she did it again for me with her piece, “The new female gaze is shocking for its novelty and audacity.”
How can anyone talk so much crap in so few sentences? Yes, we get doublethink, double standards and Double Dutch all in one giddy package.
Gemmell wants us men, actually us straight men (she’s particular on that point – more about this later), to be afraid, very afraid, because women are now openly “gazing.” I kid you not. “Gazing,” and brazenly at that.

We’re gazing. Openly and boldly and with a good old giggle, and some men aren’t enjoying being reduced to their mere body parts. The shoe, now, is well and truly on the other foot.

This drivel reminds me of Hanna Rosin triumphantly declaring “The End of Men” without one thought for her own husband or son. Gemmell’s Feminism is clearly of the “Women are more equal than men” variety.

By Michael Krieger: It’s one thing for an 80 year old to nostalgically lament that things aren’t as they used to be. The problem is, I’m only 36 years old and this country already barely resembles the place I grew up in. 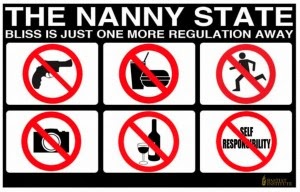 I’ve mentioned in the past how I used to ride the New York City public bus to and from school by myself starting when I was around 9 or 10 years old. Many of my peers started taking the then dreaded subway by themselves around the same time. Bear in mind, this was NYC in the 1980’s, a far different place than the Disneyland for Wall Street it has become in the subsequent decades. I can’t recall a single child abduction happening to anyone at my school, but what I can remember was a teacher being fired for molesting young boys. Makes you wonder about where the real danger lurks, doesn’t it?

Muslims Are The Greatest Victims Of Terrorism

"It's been the French, British and Americans who invaded Libya who are financing and training terrorists in Syria and who fostered sectarian violence in Iraq based on Israeli policy papers." Ry Dawson
Posted by Angelo Agathangelou at 6:05 pm No comments: Links to this post

The social engineers want to condition the general public to think “men = bad” and “women = victim”.

By Jim Muldoon: Ivan Pavlov, in experiments he was conducting on the digestive system of dogs, noted that the dogs would begin salivating when the technician who fed them came into the room. His interest in this was that salivation is a reflex action, not a conscious action. In further experiments, he found that the dogs could be “conditioned” to associate various stimuli, for example the sound of a bell, with food so that, when hearing the bell, the dog would begin salivating.
This, of course, is because dogs, like humans, learn by recognising patterns. The dogs, wanting food, were looking for any clues as to where and when the next meal might be coming from. Once they recognised the pattern of “bell rings, then food comes”, then the salivating reflex is brought forward from the time of seeing actual food to the time of hearing the bell.
The problem for the dogs, and humans too, is that the pattern recognition mechanism can be tricked, which should be obvious from the experiment. There was no logical connection between the sound and the food.
Psychologists refer to the phenomenon that Pavlov documented as classical conditioning.
But let me pose a question for you. What would happen if the dogs found a way to ring the bell…?

Turkish Prime Minister Ahmet Davutoglu has likened Israeli Prime Minister Benjamin 'The Butcher Of Gaza' Netanyahu to the gunmen in the recent attacks in the French capital of Paris, which left 17 people dead.

Orwellian UK Zionist Shill Regulator BANNED Press TV:
“Netanyahu has committed crimes against humanity the same like those terrorists who carried out the Paris massacre,” Davutoglu  said on Thursday in a televised briefing in Ankara, citing the deadly 2010 Israeli assault on a Turkish aid vessel and the 2014 war on Gaza.
On May 31, 2010, Israeli commandos attacked Freedom Flotilla in international waters in the Mediterranean Sea, killing nine Turkish citizens on board the Turkish-flagged Mavi Marmara and injuring about 50 other people, who were part of a team on the six-ship convoy seeking to deliver aid to the Gaza Strip.

Read more »
Posted by Angelo Agathangelou at 12:14 pm No comments: Links to this post

By Michael Snyder: When the stock market starts to behave like a roller coaster, that is a sign that a major move to the downside is right around the corner.  As I have stated repeatedly, when the market is very calm it tends to go up.  But when the waters start getting really choppy, that is a clear indication that stocks are about to plummet.  In early 2015, volatility has returned to Wall Street in a big way.  At one point on Tuesday, the Dow was up more than 300 points.  But then the bottom dropped out.  From the peak on Tuesday, the Dow plunged nearly 700 points in less than 30 hours before recovering more than 100 points at the end of the day.  The Dow has now experienced the longest losing streak that we have seen in 3 months, but that is not that big of a deal.  Of much greater concern is the huge price swings that we have been seeing. Remember, the three largest single day stock market increases in history were right in the middle of the financial crisis of 2008.  So if stocks go up 400 points tomorrow that is NOT a good sign.  What we really need is a string of days when stocks move less than 100 points in either direction.  If stocks keep making dramatic moves up and dramatic moves down, history tells us that it is only a matter of time before they collapse.  Any student of stock market history knows that what we are witnessing right now is exactly how markets behave right before they crash.

Read more »
Posted by Angelo Agathangelou at 11:13 am No comments: Links to this post

"Evil, terrorist, terror, terrifies, terrified livestock as they beg psychopathic, fascist, murdering, feminist rulers to strip them of liberty, face fuck them with a giant cock of lies and slaughter men, women and children in the name of free-dumb, but it's not the end of the world!" Deek Jackson
Posted by Angelo Agathangelou at 8:33 am No comments: Links to this post

By Michael Krieger: There appears to be a direct correlation between terror attacks and stupidity in the Western world. The more attacks, the more idiotic the response. Just when you thought the bar couldn’t move any lower, it has. From the International Business Times:

One of the biggest education publishers in the world has warned its authors not to mention pigs or sausages in their books to avoid causing offense.


Oxford University Press (OUP) said all books must take into consideration other cultures if they hope to sell copies in countries across the world.

As a result, the academic publisher has issued guidance advising writers to avoid mentioning pigs or “anything else which could be perceived as pork” so as not to offend Muslim or Jewish people.
The move was revealed during a discussion on free speech during BBC Radio 4’s Today programme in the wake of the attack on French satirical magazine Charlie Hedbo and its decision to use an image of the Prophet Mohammed on the cover of its latest issue.
Read more »
Posted by Angelo Agathangelou at 3:18 am No comments: Links to this post

Russia Just Pulled Itself Out Of The Petrodollar

Submitted by Tyler Durden: Back in November, before most grasped just how serious the collapse in crude was (and would become, as well as its massive implications), we wrote "How The Petrodollar Quietly Died, And Nobody Noticed", because for the first time in almost two decades, energy-exporting countries would pull their "petrodollars" out of world markets in 2015.
This empirical death of Petrodollar followed years of windfalls for oil exporters such as Russia, Angola, Saudi Arabia and Nigeria. Much of that money found its way into financial markets, helping to boost asset prices and keep the cost of borrowing down, through so-called petrodollar recycling.
We added that in 2014 "the oil producers will effectively import capital amounting to $7.6 billion. By comparison, they exported $60 billion in 2013 and $248 billion in 2012, according to the following graphic based on BNP Paribas calculations." 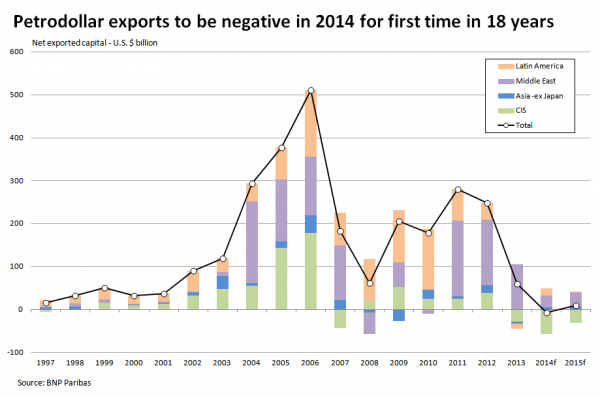 Read more »
Posted by Angelo Agathangelou at 1:16 am No comments: Links to this post

The Debate Between The Sexes

By Chris Good: The debate between the sexes has raged on for decades and it seems necessary to acknowledge that, to some degree, neither side will buckle to the other. The reason for this, obviously, is that we each have our own views, our beliefs and our own cause. A staggering amount of research and statistics are available that prove, beyond doubt, that institutional and cultural prejudice exists against men, so we must ask ourselves why the feminist movement, and individual feminists, refuse to acknowledge this?
My argument would be down to the natural tendency of us all, as humans, to favour information that supports our own preconceptions and our idea of the truth and to discredit that which threatens it; this is well known in psychology and is called “confirmation bias”.
Perhaps one of the first lessons in research, science and experiment is to acknowledge our bias, prejudice and the simple fact that we are, most likely, looking into something in order to prove ourselves right. It can be an incredibly difficult task to remain objective when faced with data that conflicts with, what we know in our core and very being, is correct.
Confirmation bias is no more evident than where emotional investment and identity is at stake. It is one thing to objectively hold a viewpoint and opinion and face the challenge to change that, but it is quite another when it threatens a perspective and ‘truth’ that we have attached to our idea of ‘who we are’ and ‘what we are’. I am a “Christian”. I am a “Feminist”. “I am a….” What we are saying is that we have made a belief a very definition of who we are and, perhaps, why we are here. This truth belongs to me, defines me and more than that, it IS me.