Saudi Princes Were Patrons Of Al-Qaeda In 1990s: Zacarias Moussaoui

'Rogue elements within the US government orchestrated or at least encouraged the 9/11 attacks in order to boost the US economy and advance the Zionist agenda.'
A former al-Qaeda operative imprisoned in the United States has told lawyers that members of the Saudi royal family provided millions of dollars to the terrorist group in the 1990s. 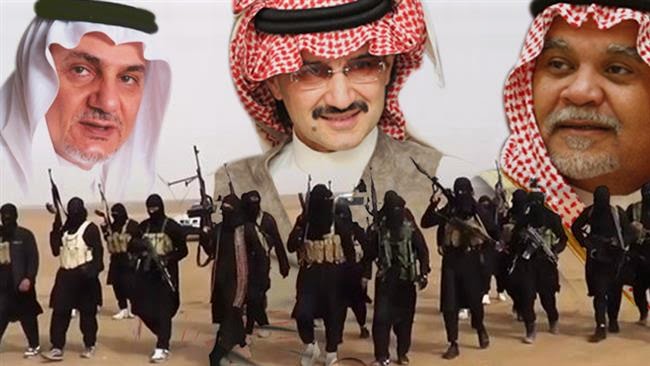 Orwellian UK BANNED Press TV: Zacarias Moussaoui, a 46-year-old French citizen, made the revelations in a testimony filed in a New York federal court on Tuesday by lawyers for victims of the September 11, 2001, attacks who accuse Riyadh of sponsoring al-Qaeda.
Moussaoui said a list of al-Qaeda donors that he created during Osama bin Laden's tenure included some "extremely famous" Saudi officials, including Prince Turki al-Faisal, then the Saudi intelligence chief; Prince Bandar Bin Sultan, the longtime Saudi ambassador to the US; and Prince Al-Waleed bin Talal, a famous Saudi billionaire businessman.
"Shaykh Osama wanted to keep a record who give money because ... who is to be listened to or who contribute to - to the jihad," said Moussaoui, who was given life sentence in 2006 after he admitted terror charges following the 9/11 attacks.

Posted by Angelo Agathangelou at 10:24 pm No comments: Links to this post

"I will tell Mr Schäuble that we may be a Left-wing riff-raff but he can count on our Syriza movement to clear away Greece’s cartels and oligarchies," says Yanis Varoufakis. 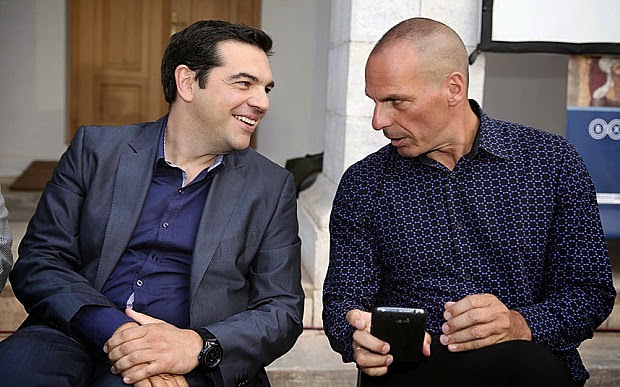 By Ambrose Evans-Pritchard: Greece’s finance minister has denounced eurozone threats to cut off funding for Greek banks later this month as political intimidation, warning in fiery language that his country’s democratic revolution will not be crushed into submission.
Yanis Varoufakis, the emerging rock-star of Europe’s anti-austerity uprising, said the European Central Bank is straying into murky waters by openly stating that it may cease to act as lender-of-last resort for the Greek financial system.
“These threats are perfectly illegitimate. They are trying to asphyxiate us with arbitrary deadlines,” he told The Telegraph during a lightning tour of EU capitals to drum up support.
A string of ECB officials have said in recent days that the institution would no longer accept Greek debt as collateral in exchange for loans after February 28, if Greece refuses to cooperate with the EU-IMF troika and walks away from its bail-out deal.

Time to discuss one of the most outrageous injustices in this world and that is lack of men's reproductive rights, and its outcomes. SkepTorr

Read more »
Posted by Angelo Agathangelou at 3:21 pm No comments: Links to this post

Russell Brand's reaction to the news that Donald Trump wants to run for President and build a giant fence between the United States and Mexico.
Posted by Angelo Agathangelou at 12:59 pm No comments: Links to this post

Stealing sperm, lying about birth control use, and paternity fraud are just some of the ways in which women can undermine male autonomy. What does the state do to protect us? Well... Thorium

What One Son Of Liberty Can Do, So Can Another - The Dissident Dad

“Every heart beats true ‘neath the Red, White and Blue, where there’s never a boast or brag. But should old acquaintance be forgot, keep your eye on the grand old flag.”

By The Dissident Dad: I remember proudly singing this as a child at school, pounding my heart with a closed right fist as we sang that verse. I remember learning about George Washington, Thomas Jefferson, and about the Sons of Liberty. British colonists who were mad as hell about a distant central government taxing their income between 1% and 2%, plus additional taxes on sugar trade and tea.
These Americans wanted liberty. They wanted self-governance.
Not without their flaws, like all of us. They still had slavery, but certainly, during a period of history where everyone was merely a subject to the king, these guys were taking a giant step in the right direction. Unfortunately, that America, the one we are sold on and sing to as school children, is dead.

Little Oligarch Gone Wild - Paris Hilton’s Brother Yells: “I Will Fucking Own Anyone On This Flight; They Are Fucking Peasants”

“If you wanna square up to me bro, then bring it and I will fucking fight you,” he allegedly said as well as, “I am going to  fucking kill you. I will fucking rip through you,” and “I will fucking own anyone on this flight; they are fucking peasants.”
“I could get you all fired in 5 minutes,” he reportedly said while grabbing a flight attendant’s shirt at one point during the incident. “I know your boss! My father will pay this out. He has done it before. Dad paid $300k last time.”
– Conrad Hilton on an international flight

By Michael Krieger: The reason I often use the terms “serfs” and “plebs” when referring to the American masses is not to insult the less fortunate; rather, it is to hammer in the fact that the oligarchs running American society see the unwashed masses as useless peasants. Naturally, they will never admit this publicly, but every now and again one of them slips up and what they really think becomes abundantly clear. Enter Conrad Hilton, Paris Hilton’s brother, and serf-master in training.

He has just been arrested for an outburst on an international flight that occurred last July. The Daily News reports the following:

Read more »
Posted by Angelo Agathangelou at 5:45 am No comments: Links to this post

Another Conspiracy Theory Becomes Fact: The Entire Oil Collapse Is All About Crushing Russian Control Over Syria

Submitted by Tyler Durden: While the markets are still debating whether the price of oil is more impacted by the excess pumping of crude here, or the lack of demand there, or if it is all just a mechanical squeeze by momentum-chasing HFT algos who also know to buy in the milliseconds before 2:30pm, we bring readers' attention back to what several months ago was debunked as a deep conspiracy theory. 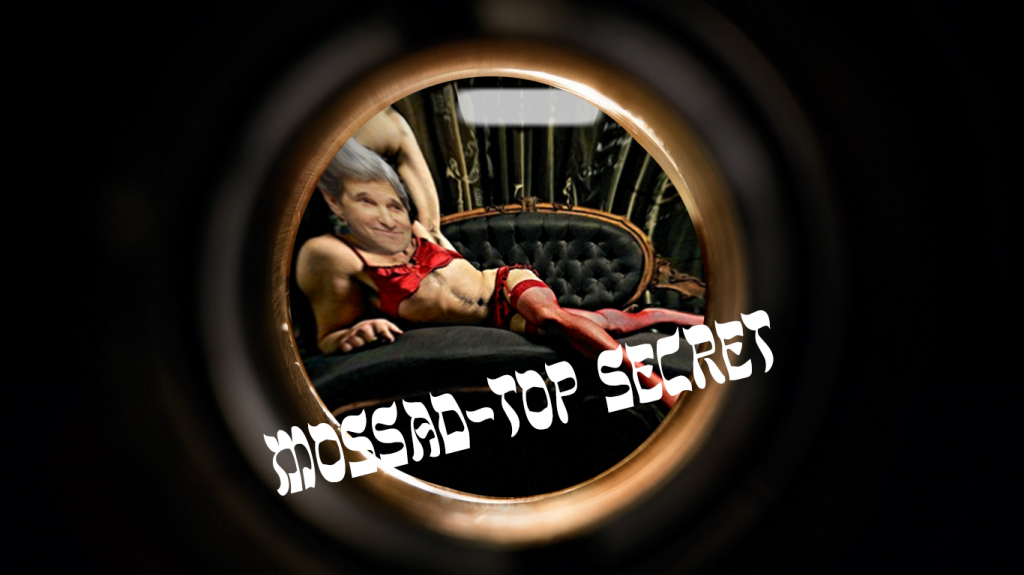 Back then we wrote about a certain visit by John Kerry to Saudi Arabia, on September 11 of all days, to negotiate a secret deal with the now late King Abdullah so as to get a "green light" in order "to launch its airstrikes against ISIS, or rather, parts of Iraq and Syria. And, not surprising, it is once again Assad whose fate was the bargaining chip to get the Saudis on the US' side, because in order to launch the incursion into Syrian sovereign territory, it "took months of behind-the-scenes work by the U.S. and Arab leaders, who agreed on the need to cooperate against Islamic State, but not how or when. The process gave the Saudis leverage to extract a fresh U.S. commitment to beef up training for rebels fighting Mr. Assad, whose demise the Saudis still see as a top priority."

“You just killed the Troika.” 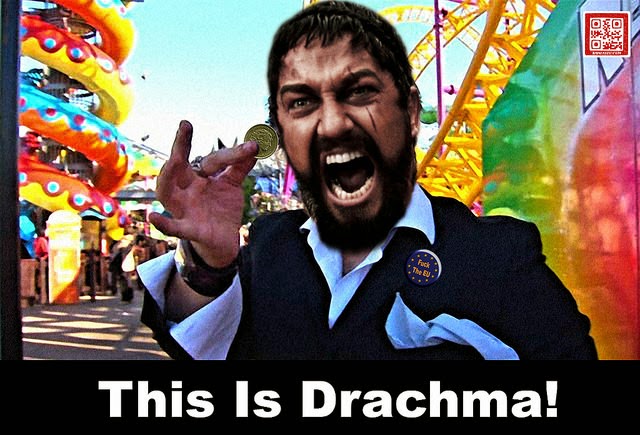 By Don Quijones: According to Greek private broadcaster Mega TV, “You just killed the Troika” were the parting words that Eurogroup Chief Jeroen Dijsselbloem whispered into the right ear of Greece’s new Finance Minister Yannis Varoufakis at the end of what was clearly a tense meeting. Varoufakis’ response was a monosyllabic but no less emphatic “Wow.”
While Dijsselbloem’s statement verges on hyperbole – it’s hard to imagine that the Troika’s dreaded three-headed hydra could be slain by just a few harsh words from a Greek economist-turned-politician – it’s nonetheless a fair reflection of the atmosphere of chaos, fear and panic that has descended upon the EU’s hallowed halls of power since Syriza’s election victory last Sunday.
For the first time since the global financial crisis buffeted Europe’s southern shores, in late 2009, a country has voted in a government that refuses to play by the Troika’s rules. In just its first week of power Syriza provoked the Troika’s ire a number of times, by promising to raise the country’s minimum wage and state pensions as well as put a halt to much of the former government’s privatization program.
In fact, according to a statement by Varoufakis, Greece’s new government no longer wants to even have anything to do with the Troika.

Read more »
Posted by Angelo Agathangelou at 2:11 am No comments: Links to this post

'In short, terrorists are using our own sexism – our assumption that women are largely incapable of violence – against us, to horrifying effect. ...Black Widows!' 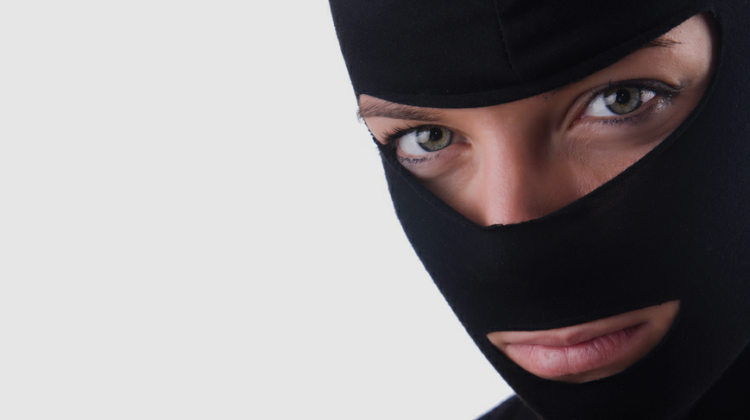 By Robert Franklin: Terrorism. It seems like it’s in the news every day. The slaughter of French satirical journalists is still fresh in our memories when someone detonates a bomb at a mosque in Karachi, Pakistan killing over 50 people. The trial of the Boston Marathon bomber is underway in Massachusetts. These and countless other incidents occur in a context of decades of the most horrifying acts of mass murder.
Who are these people, these terrorists? The question is not rhetorical. It’s one of the most important ones we can ask in our efforts to prevent acts of terrorism.
Apprehending terrorists before they strike requires knowing both the what and the who. Did someone recently purchase 1,000 pounds of nitrate fertilizer? If so, who was it? A farmer in Kansas or the Imam of a radical mosque in Newark? No state apparatus can simply examine behavior and, without more, determine who is a terrorist about to act. A necessary part of preventing terrorism is understanding who is a likely terrorist.
Doing so is at best an inexact science, a net that’s bound to have gaping holes. But still, the better the net, the greater the chance of preventing acts of terrorism. That makes it all the more remarkable that there’s one hole in our net that we’ve known about for many years but refuse to mend.