This video raped me.

Graeber’s argument is similar to one he made in a 2013 article called “On the Phenomenon of Bullshit Jobs”, in which he argued that, in 1930, economist John Maynard Keynes predicted that by the end of the century technology would have advanced sufficiently that in countries such as the UK and the US we’d be on 15-hour weeks. “In technological terms, we are quite capable of this. And yet it didn’t happen. Instead, technology has been marshalled, if anything, to figure out ways to make us all work more. Huge swaths of people, in Europe and North America in particular, spend their entire working lives performing tasks they believe to be unnecessary. The moral and spiritual damage that comes from this situation is profound. It is a scar across our collective soul. Yet virtually no one talks about it.”
But what happened between the Apollo moon landing and now? Graeber’s theory is that in the late 1960s and early 1970s there was mounting fear about a society of hippie proles with too much time on their hands. “The ruling class had a freak out about robots replacing all the workers. There was a general feeling that ‘My God, if it’s bad now with the hippies, imagine what it’ll be like if the entire working class becomes unemployed.’ You never know how conscious it was but decisions were made about research priorities.” Consider, he suggests, medicine and the life sciences since the late 1960s.

It Came From The Basement - Femi-Nazi Calgary Comics Expo Exposed

We discuss our expulsion from the Calgary Comics and Entertainment Expo. And possibly play Cards Against Humanity. HoneyBadgerRadio

Max Keiser and Stacy Herbert discuss gyrocopters and glitter bombs as a solitary acts of Global Insurrection Against Bankster Occupation (GIABO) in a day of gulags when organising collective actions can be extremely dangerous. They also discuss Kim Dotcom’s plans for an equity crowd funding campaign for MegaNet and the ‘inconceivable’ negative interest rates on some mortgages in Spain. In the second half, Max interviews Professor John Mill Ackerman about protest parties in Mexico, including Morena, and the economic crisis driving them.

Read more »
Posted by Angelo Agathangelou at 9:13 pm No comments: Links to this post

Wealthiest 1% Must Be ‘Toppled’ Sting - To Get Tripoli Clinton Elected

WD: Things they tell us to get themselves elected, "I will close Guantanamo bay." "We must topple the one percent." They know exactly what we want and they dangle the carrot, lately via the first black president and now via the first female president. My question is after Obama 'the baby bomber' turned out to be worse than Bush, what fools are still buying the fact that people who cost so much to be elected aren't owned by the banksters and the MIC who paid for them? I hope to be eating my words in 5 years time but here is a prediction, just as Obama was used to justify US military infiltration and bombing of Africa, there is an angle to the bullshit that the Tripoli Clinton machine is pumping out now. Who or what will Hitlery who revelled in the utter destruction that she created of formerly prosperous Libya that was the envy of it's neighbours? Will she be taking out, the nuclear family, four fifths of the world population, starting WW3 with Russia or all of the above? N.B. The only available faux opposition party will result in the same outcome. 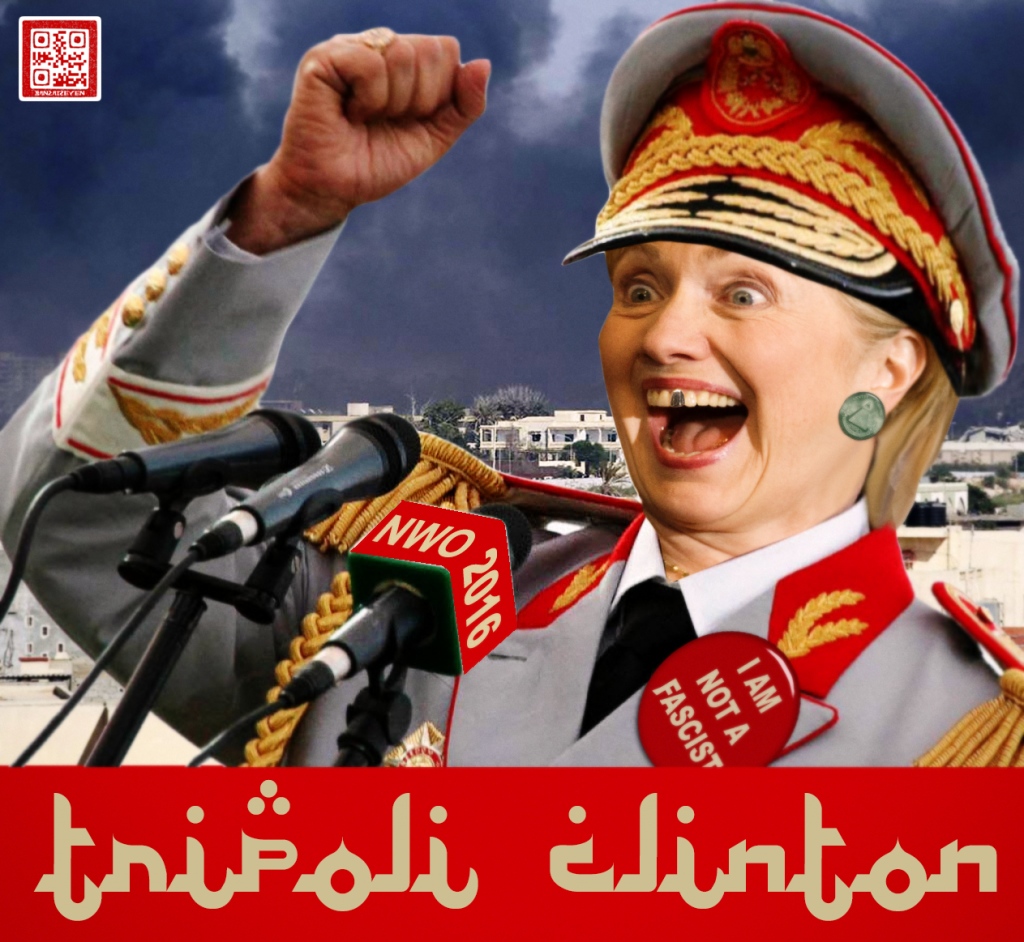 Former US Secretary of State and major war-racketeer Hillary Clinton is trying to sell the idea that she believes the wealthiest 1 percent of people in the United States must be “toppled” in order to strengthen the middle class and decrease the wealth gap between the rich and poor. Press TV: The Democrat presidential candidate also believes that the unending accumulation of massive wealth at the top of the spectrum is damaging the country and hampering its economy.

Chivalry But Equality: The Feminist Double-Standard

By Prentice Reid: Author Warren Farrell has written in detail on how the feminist movement has freed women from the old role women were formerly forced into by circumstance and by chivalrous laws. Men, however, have not been freed and there is no effort whatsoever by mainstream culture to liberate them from their role as provider/protector/performer.
Men are expected to treat women like helpless, delicate flowers one day and then the next, we are supposed to forget that they were helpless and see them as competent enough to make half of the decisions in relationships or the workplace. We are directed to believe women capable of making good decisions. If we note the hypocrisy, we are called misogynists.
When women are asked what they want in a relationship a sizeable portion of them will say that they want a man who will provide them with some measure of chivalry but one who can also “isn’t afraid of an independent woman”.
These are the same independent women who are often overly paranoid of men but the second they get a flat tire at the side of the road or their car gets stuck in the snow, they can magically trust any unrelated man in the city to come along and change her tire for her or push her out of the snow. No fear, no suspicion. Just the expectation, in fact the promise, of chivalry.
The accumulative burden of constantly supporting this double-helping of entitlement eventually wears men down and has led an increasing number of men to the conclusion that dating is simply not worth it.
The feminist movement, which claims to be driven by an overriding desire for equality has reinforced and demanded that women be given both equality and chivalry, and this message is interwoven within much of what feminism pushes for.

Read more »
Posted by Angelo Agathangelou at 5:59 pm No comments: Links to this post

I Made Him Remember My Name

By Shawnda Kettles. Men's Human Rights Ireland: We are in a writers group on facebook and come across many different stories, articles and poems. We thought we’d share this with the world.

If US Wants To Study ‘Weaponization’ Of Media, US Should Study Itself - Noam Chomsk

American media outlets are showing a growing concern over the influence of foreign, particularly the Russian media and alternative media outlets. However, in an exclusive interview, professor and philosopher Noam Chomsky says that America’s media machine has been spreading its own form of propaganda throughout the world, while at the same time refusing to acknowledge its own culpability in international conflicts. He tells Alexey Yaroshevsky more about the US manipulation of information and its effect on democracy.
Posted by Angelo Agathangelou at 11:13 am No comments: Links to this post

By Pavel Stankov: Imagine yourself in an academic setting where somebody makes an offhand remark that male writers tend to be self-centered. With no evidence or argument, this statement is biased and uninformed, but people are entitled to their opinions.


Now further imagine that the same person then says that the first person singular “I” in the writing of male authors is like an erect penis directed at us from every page.

This incident happened the week before spring break in a discussion at the University of Hawai‘i at Mānoa.


For most in higher education today, an event like this would hardly be surprising. However, what made the scene difficult to believe is that nobody challenged it: We let it pass as though nothing had happened while a few heads nodded in polite approval.


This is a problem because complacency perpetuates and legitimizes injustice. For the sake of harmony, we should speak against bigotry in all forms. Disparaging men is just as wrong as degrading women or any other demographic. Crossing this line is where freedom ends and hate-speech begins.
Read more »
Posted by Angelo Agathangelou at 7:49 am No comments: Links to this post

Milo Yiannopoulos On Sky News: Why Men Are Better At Chess

Milo Yiannopoulos debates feminist Reni Eddo-Lodge on why men seem to be better at chess, and whether there's anything particular about the male brain that makes this so. Milo Yiannopoulos
Posted by Angelo Agathangelou at 6:21 am No comments: Links to this post

"Do you carpe the shit out of diem?" Raging Golden Eagle
Too far in either direction is not good. Your life can end at any moment, last thing you want is to sacrifice the time you have now for a future that may never come. Don't be afraid to treat yourself and live life to the fullest (or as full as you need to be satisfied), but also be sure to prepare for the future so you can continue living that way until your final breath.
Posted by Angelo Agathangelou at 4:15 am No comments: Links to this post

"Why didn't you [Calgary Comic Con] give Alison a warning? ...When you pass a life sentence to a person with such callousness, it reflects badly on you." SkepTorr
WD: Behold the extraordinary and diverse community of men and women known as the MRM. We all support Alison and the Honey Badgers.
Read more »
Posted by Angelo Agathangelou at 12:30 am No comments: Links to this post