The “War On Cash” 666 Migrates To Switzerland

By Pater Tenebrarum: The war on cash is proliferating globally. It appears that the private members of the world’s banking cartels are increasingly joining the fun, even if it means trampling on the rights of their customers.
Yesterday we came across an article at Zerohedge, in which Dr. Salerno of the Mises Institute notes that JP Morgan Chase has apparently joined the “war on cash”, by “restricting the use of cash in selected markets, restricting borrowers from making cash payments on credit cards, mortgages, equity lines and auto loans, as well as prohibiting storage of cash in safe deposit boxes”.
This reminded us immediately that we have just come across another small article in the local European press (courtesy of Dan Popescu), in which a Swiss pension fund manager discusses his plight with the SNB’s bizarre negative interest rate policy. In Switzerland this policy has long ago led to negative deposit rates at the commercial banks as well. The difference to other jurisdictions is however that negative interest rates have become so pronounced, that it is by now worth it to simply withdraw one’s cash and put it into an insured vault.

Read more »
Posted by Angelo Agathangelou at 10:36 pm No comments: Links to this post

An Open Letter Of Response To The Children Of Oberlin And Their Love Letter To Themselves. 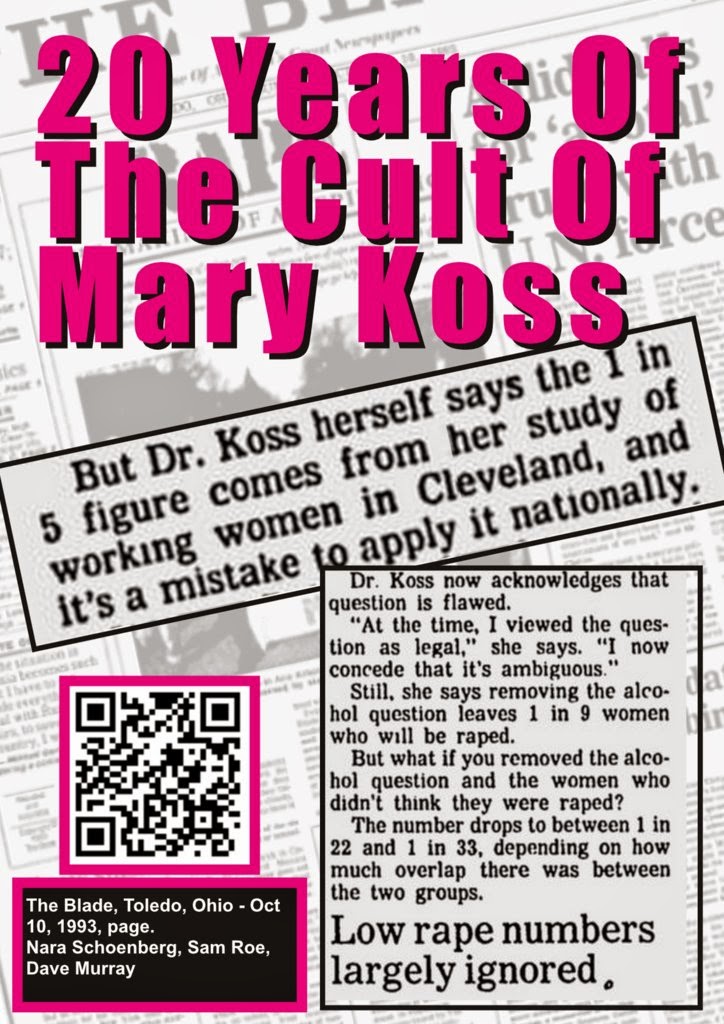 By Isaac T. Quill: Trigger Warning – This response is NSFW (Not Sycophantic Feminist Wary) and as such may offend anyone who is self absorbed and likely to be a Delicate Snowflake. Should you be unable to cope, please exit immediately through the AVfM Gift Shop. Every 100th delicate flower exiting through the shop will be presented with a Special Edition Branded AVfM Kitten, plucked  from an  AVfM Kitten Sammich. You can keep the mayo as a free sample.
In response to “In Response to Sommers’ Talk: A Love Letter to Ourselves“, The Oberlin Review, April 18, 2015:
Dear Oblinettes, First let me make clear that I am a Sexual Assault Survivor and Advocate – so where the Oberlin authors call for such voices to be given priority, I will advance by their permission and full throttle. My voice counts even if you are to hate what I say and how I say it! I really have no time for “Social Justice Worriers(sic)” who just make the issues less clear and all too egocentric.
Some, if not all of these Tizzified Students, do need to do some homework and stop just bombing social media, public gatherings and even their own “Incredulity Glands” with “Woozles” and “Fallacious Memes”.

Read more »
Posted by Angelo Agathangelou at 8:35 pm No comments: Links to this post

On Friday 17 April 2015 Mike Buchanan received a call from Ray Barry, the J4MB candidate in the Broxtowe constituency. He was understandably angry, having just learned that not only had he not been invited onto the BBC Radio Nottingham hustings for Broxtowe, the programme had been recorded the previous evening, and broadcast live Ray then informed Mike Buchanan that he'd been told the BBC Radio Nottingham hustings for Ashfield, due to be held six days later, was to have as one of its themes what more political parties could do to attract women's votes.

"Hi I'm David Cameron I want private ownership of just about everything including you, your body, your mind, your soul and the air you breath. I'm bought and paid for by a few wealthy families that own everything of value and if I get elected, I will do everything I can to line their pockets and rob you blind. Hi I'm Ed Miliband, I want what David wants basically. I'm Nick Clegg me and my party have been sucking Tory cock for years now." Deek Jackson
Posted by Angelo Agathangelou at 6:35 pm No comments: Links to this post

Max Keiser and Stacy Herbert, in a double-header, reveal the pale riders of the rigged market apocalypse - from the patsy from the hell that is Hounslow to the ‘short of a lifetime’ guaranteed to deliver Armageddon in a wasteland of declining McWages.
Posted by Angelo Agathangelou at 4:33 pm No comments: Links to this post

Germany Prepares For "Plan B", Says Greece Would "Need Not Only A Third Bailout, But Fourth, Fifth Or Even More" 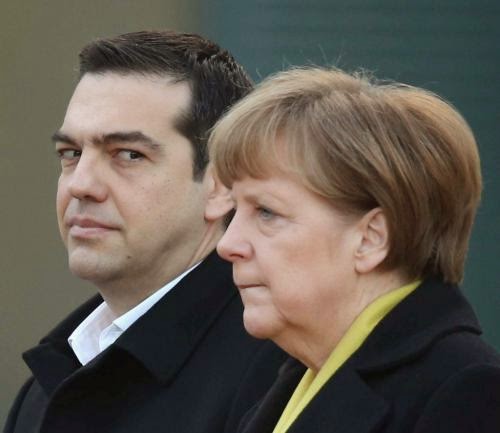 Submitted by Tyler Durden: It has been a very disturbing 24 hours for Greece.
It all started during yesterday's surprisingly short, just one hour long Eurozone finmin meeting in Riga, where Yanis Varoufakis not only got the most "hostile" reception yet being called "a time-waster, gambler, and amateur", but for the first time one minister openly said that maybe it was time governments prepared for the plan B of a Greek default. This happened after Jeroen Dijsselbloem slammed the door on Varoufakis' proposal for early cash after partial reforms.
"A comprehensive and detailed list of reforms is needed," Dijsselbloem told a news conference following a meeting in Riga. "A comprehensive deal is necessary before any disbursement can take place ... We are all aware that time is running out."

Read more »
Posted by Angelo Agathangelou at 3:17 pm No comments: Links to this post

US President Barack Obama has “literally assassinated” Americans by using drone strikes, former American Congressman Ron Paul says.
Press TV: In a video posted on his Ron Paul Institute for Peace and Liberty, the former Republican presidential candidate criticized Obama for the “targeted assassination” of Americans following an announcement by the White House on Thursday that two hostages, including one American, were killed during a US operation against an al-Qaeda compound near the Afghan-Pakistani border.
The White House identified the hostages killed in the operation in January as American contractor Warren Weinstein and Italian aid worker Giovanni Lo Porto.
Paul said that Obama had already known the incident but just decided to publicly talk about it because the media was informed of the strikes.

Read more »
Posted by Angelo Agathangelou at 2:07 pm No comments: Links to this post

We were happy to have Karen on, but when she asked permission to answer a question that we asked, then politely answered the question that made me and Skep feel harassed and unsafe. As usual, we were gossiping about the people who were not listening. If you wanted to avoid vicious rumours being spread about you, you should have been there. 6oodfella
Posted by Angelo Agathangelou at 12:59 pm No comments: Links to this post 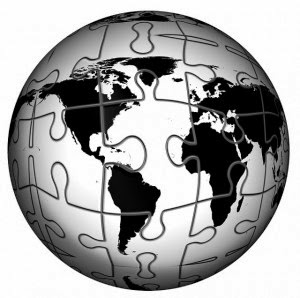 By Michael Snyder: Well, the Nasdaq finally did it.  It has climbed all the way back to where it was at the peak of the dotcom bubble.  Back in March 2000, the Nasdaq set an all-time record high of 5,048.62.  On Thursday, after all these years, that all-time record was finally eclipsed.  The Nasdaq closed at 5056.06, and Wall Street greatly rejoiced.  So if you invested in the Nasdaq at the peak of the dotcom bubble, you are just finally breaking even 15 years later.  Unfortunately, the truth is that stocks have not been soaring because the U.S. economy is fundamentally strong.  Just like the last two times, what we are witnessing is an irrational financial bubble.  Sometimes these irrational bubbles can last for a surprisingly long time, but in the end they always burst.  And even now there are signs of economic trouble bubbling to the surface all around us.  The following are 11 signs that we are entering the next phase of the global economic crisis…
#1 It is being projected that half of all fracking companies in the United States will be “dead or sold” by the end of this year.
#2 The rig count just continues to fall as the U.S. oil industry implodes.  Incredibly, the number of rigs in operation in the United States has fallen for 19 weeks in a row.
#3 McDonald’s has announced that it will be closing 700 “poor performing” restaurants in 2015.  Why would McDonald’s be doing this if the economy was actually getting better?

By Michael Krieger: We’ve all seen the stats by now. U.S. police killed more citizens in March alone than UK police have killed in 100 years. We’ve seen the plethora of videos documenting unnecessary police brutality. There are so many in fact, I can’t even begin to document them all. We’ve also seen the militarized police in all its ghoulish display in Ferguson.
We’ve seen the wrong way to police in New York City, most recently when an unarmed Eric Garner was choked to death on the street in broad daylight for selling untaxed cigarettes. Now, finally, we see how real policing is supposed to be done, courtesy of four Swedish police officers who were on vacation in NYC.
First, a little background from the Free Thought Project:

New York, NY–  Four Swedish police officers vacationing in New York City were on the subway on Wednesday when a fight broke out. The train operator asked if there were any police riding who could help with the situation.  The Scandinavian patrolmen were very soothing and non-aggressive as they de-escalated the situation instead of escalating it, the way we have seen so often from our own men and women in blue.

The US is the sole initiator of all modern military conflicts, maintains Russia’s top brass, adding that Washington and its allies have used military force against third parties over 50 times in a matter of just one decade. 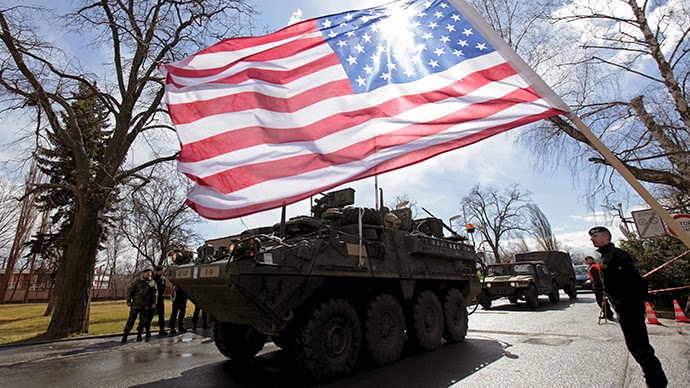 RT: The central focus of the American administration has been consistent containment of Russia to prevent alternative center of power emerging, said Lieutenant General Andrey Kartapolov, head of the Main Operation Directorate of Russia’s General Staff.
In January, Russian President Vladimir Putin warned the support that Washington provides to the Kiev authorities and Ukrainian army is aimed at “achieving the geopolitical goals of restraining Russia.”
Now the US has deployed hundreds of military instructors to Ukraine to train troops. Yet Russia’s Defense Ministry spokesman Major General Igor Konashenkov accused Washington of sending its soldiers not to training ranges, “but directly in the combat zone near Mariupol, Severodonetsk, Artyomovsk and Volnovakha.”
“The US appears to be the ultimate instigator of all military conflicts in the world. The Western countries have begun to hold themselves out as ‘architects’ of the international relations system, leaving to the US the role of the world’s only superpower,” Kartapolov said at a military-scientific conference dedicated to the 70th anniversary of Russia’s victory in WWII.

Read more »
Posted by Angelo Agathangelou at 2:44 am No comments: Links to this post