David Duke: The following article from the Times of Israel reports on a global conference being held in Jerusalem (sponsored by Israel’s Foreign Ministry) aimed at enacting international laws against “anti-Semitism” and enforcing bans on internet “hate speech.” The Israelis seek to globally criminalize and ban from the internet such things as Holocaust revisionism and questioning Israel’s legitimacy. The German Justice Minister and the Mayor of Paris were among foreign luminaries to attend the conference. This should be a wake-up call to many that while the internet and the First Amendment provide us with the opportunity to liberate ourselves peacefully by educating our people about the tyranny of Jewish supremacism, this window of opportunity is limited and we have to act before it is slammed shut. 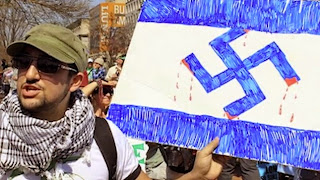 Gathering notes ‘pervasive, expansive, transnational’ nature of internet – and the challenge it poses to combating hate
By JTA: Still from the new documentary ‘Crossing the Line 2,’ which depicts rising anti-Semitic activity on North American campuses.

By Mike Buchanan: Sandy Toksvig is a lesbian comedienne, currently the spokeswoman of a new political party, Women's Equality Party, which plans to field candidates in the 2020 general election.
The relevant section of the BBC programme 'The One Show' starts at 3:20. The reason we presented her with our 'Lying Feminist of the Month' award is explained on her award certificate, downloadable through this link https://j4mb.wordpress.com/2015/05/17.... We confidently predict we'll be presenting more of these awards to Ms Toksvig and her colleagues in the fullness of time.
Posted by Angelo Agathangelou at 10:18 pm No comments: Links to this post

Part of an exciting patriarchal strategy that ensures only men feel welcome on university and college campuses. Evan Delshaw

Read more »
Posted by Angelo Agathangelou at 5:20 pm No comments: Links to this post 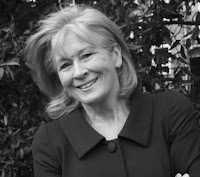 By Kathy Gyngell: Political parties may come and go but Wimmin’s Hour is forever. You’d be forgiven for believing there’d been no election and that the wimmin’s favourite party had not imploded.  Jenni Murray and Co were last week still firmly ensconced on their hobby horse with the same predictable line up.
First up: Caroline Criado-Perez, English feminist and activist, thanks to whom we will soon see Jane Austen in a new light – on our banknotes. Criado-Perez, vilified on Twitter for her campaign, is presented as a woman we deserve to know about for showing us ‘what can be done and how to do it” when faced with this new literary genre of trolling.
Emily Watson too - awarded best actress for her gender equality declamation to the UN,  which included those sonorous lines, ‘I am a feminist too’ and ‘gender equality is your issue too’.
Then came BBC Newsnight’s very own gender appointment, political editor Allegra Stratton, someone from Equal Inheritance (do we still have primogeniture here?) and Liz Kendall MP on her bid for the Labour Party leadership.  All guests in a week which saw: the launch of the Woman’s Power list (again); the new women rape detective documentary;  women’s football world cup; and – last but not least – a celebration of  ‘18 Years Of A Minister For Women (and Equalities) with Tessa Jowell (former Wimmin’s Minister ) and the politically correct columnist Alice Thomson of The Times.

Read more »
Posted by Angelo Agathangelou at 3:09 pm No comments: Links to this post

Believe it or not, there was a time that Homosexuality wasn't a political act. A time before it was consider the LGBT community. A time before it was, a feminist issue. But does feminism really care about these people, or only when it suits them? HoneyBadgerRadio
Posted by Angelo Agathangelou at 11:53 am No comments: Links to this post

In September, The UN Launches A Major Sustainable Development Agenda For The Entire Planet 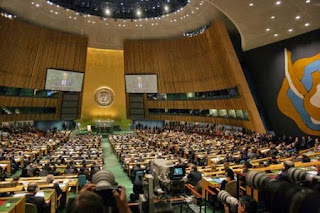 By Michael Snyder: The UN plans to launch a brand new plan for managing the entire globe at the Sustainable Development Summit that it will be hosting from September 25th to September 27th.  Some of the biggest names on the planet, including Pope Francis, will be speaking at this summit.  This new sustainable agenda focuses on climate change of course, but it also specifically addresses topics such as economics, agriculture, education and gender equality.  For those wishing to expand the scope of “global governance”, sustainable development is the perfect umbrella because just about all human activity affects the environment in some way.  The phrase “for the good of the planet” can be used as an excuse to micromanage virtually every aspect of our lives.  So for those that are concerned about the growing power of the United Nations, this summit in September is something to keep an eye on.  Never before have I seen such an effort to promote a UN summit on the environment, and this new sustainable development agenda is literally a framework for managing the entire globe.
If you are not familiar with this new sustainable development agenda, the following is what the official United Nations website says about it…

Read more »
Posted by Angelo Agathangelou at 9:49 am No comments: Links to this post

Can marriage be saved? Should it?

By August Løvenskiolds: As MGTOW (Men Going Their Own Way) I’m opposed to marriage for myself, and as MRA (Men’s Rights Advocate) I’m opposed to how marriage and marriage laws are presently administered. I would not recommend marriage to any straight man – there are no benefits to men and many pitfalls. 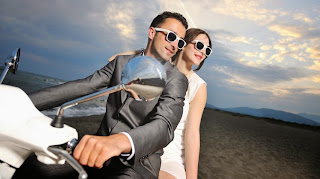 I will never marry but as a hypothetical exercise AVFM editor Peter Wright and I have been discussing the question of whether marriage can be salvaged and reformed as an institution. As Peter noted in an article:

Aside from those differences over origins, both sides agree that gynocentric marriage – its culture, customs, laws, taboos – must be utterly abandoned, not reformed. Notice here I refer to gynocentric marriage and not to a marriage of the minds, hearts, dreams, goals, projects, and bodies that might come with non-gynocentric relationships.

To understand the issues of marriage in the modern context, let’s review the historical purpose of marriage and invent some new terms for the old and new forms of marriage as they now stand, just as “mail” became “junk mail”, “email”, “snail mail”, “voicemail” and “spam.”

A social experiment to expose women's entitlement issues. This woman is 42 and is looking to trap a man as a sperm donor. This is also to raise awareness for younger men regarding the ways in which deceptive women will manipulate men in order to get pregnant. Messenger Rising
Posted by Angelo Agathangelou at 5:09 am No comments: Links to this post

By Gilad Atzmon: Dear friends, this is pretty much a summery of my  argument against Jewish power and the corrosive impact of Jewish left.  If you are interested in my work or even oppose everything I do,  I urge you to watch (or read) this talk.

The Nabil Test
In order to grasp the way in which contemporary solidarity terminology operates to deceive and derail the Palestinian cause, we will look at a few theoretical simulations that will help to clarify the corrosive nature that is the contemporary pro Palestinian discourse.
Nabil is a fictional 25-year-old Palestinian, 3rd generation refugee born and living in Sabra and Shatila, Lebanon. Nabil is unemployed.

Are Women Happier At Home?

By Suzanne Venker: So this is ultimately a debate about the gender gap—specifically, why it exists. To feminists, it is proof that women are discriminated against left and right. Left-wing women honestly believe that men, as a whole, hire less qualified males over females—in other words, generate less revenue —because they either hate or are threatened by women that much.
Reasonable folks like Gavin McInnes know the real reason women make less than men is because of the choices they freely make. In the video, he mentions the excellent book Why Men Earn More, by Warren Farrell, although an even broader book on this topic, also by Farrell, is The Myth of Male Power. Both prove beyond a shadow of a doubt that Gavin McInnes is right.