By Jim Muldoon: This is a strange old world, and with some 7 billion human being running around at the same time, I guess that there really will be all kinds of people with strange beliefs and behaviours. However, while many things are possible, there are some stories that just send the bull’o’meter well past 11 on the scale of 1-10.
Amanda McCracken tells such a tall tale for Al-Jazeera America. The piece is called “Are we entitled to sex?” with a subtitle of “My celibacy put me in the crosshairs of men’s rights activists and feminists alike”.
Personally, I have always insisted on completing the feminist refrain of “her body, her choice,” with “her problem,” and I certainly view McCracken’s celibacy as being her own business (and please, no jokes about renaming her Amanda “Won’t Fill” McCracken).
However, the question is about entitlement to sex. McCracken is certainly entitled to her celibacy. But, if she wants to end it, surely she needs the willing, enthusiastic, signed by three lawyers, consent from her prospective paramour. I know it’s not real consent, because nothing ever is for feminists, but surely the guy gets some say, doesn’t he?

Davis Duke: Canadian Prime Minister Stephen Harper is so slavishly devoted to his Zio-masters that you would think he was running for the Republican nomination for President! He so much prioritizes Israeli interests above all others that he has proposed making it a hate crime to boycott Israeli products. Wow, even Sheldon Adelson has not demanded that of his minions, but Harper is giving it up freely.
Meanwhile, Illinois lawmakers unanimously passed a bill that bars state pension funds from including companies that participate in the Boycott, Divestment and Sanctions campaign against Israel.
Robert Fisk of Britain’s “The Independent” newspaper is one of the most reliable voices of sanity in the media, and his critique of Harper and his proposal are worth a read. 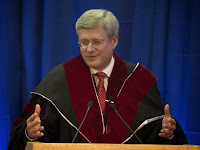 The new law would put Jews and civil society groups on trial for anti-Semitism
By ROBERT FISK: I’ve never been keen on boycotts. The one against Italy for invading Abyssinia didn’t work. Nor did the arms blockade on Spain. I’m still not sure that boycotting South Africa really brought down apartheid. I rather suspect that the old racists simply realised they were hopelessly outnumbered by the blacks of South Africa and that the game was up.
Read more »
Posted by Angelo Agathangelou at 9:30 pm No comments:

By Frank Lin: Hello reader.
I’m sorry. I forgot to ask first. Do you mind if I say hello?
Very good then, hello. I’d like to share a few ideas with you but first I’d like to ask if I can write the topic sentence. I can? Thanks! Hold on, just a few more questions. It’s a twelve word sentence. Do you mind a twelve word sentence? Is that OK? Also, there’s  a swear word. Do you mind if I type a swear word? You don’t? Great! Wait, hold on. One more thing. It’s in English. Do you mind the fact that its in English? You don’t? Awesome sauce!
OK, here’s the sentence: stopping after every discreet action to obtain consent is annoying as hell.
Now, do you mind if I also include a follow-up remark to that as well? Are you sure? You’re not drunk, are you? High? Distressed? Triggered? Suffering from deeply embedded Stockholm Syndrome? Well, there’s really no way for me to know that your consent is valid, since we’re on opposite sides of an internet connection. So I’m taking a pretty big risk here. I’m like the James Bond of consensual blogging. Shaken, not triggered.
Anyway, here’s my follow-up remark: if this turns you off reading, imagine how much it will turn you off sex.

Read more »
Posted by Angelo Agathangelou at 8:14 pm No comments:

The cashless society is nothing new, but its rapid recent progress threatens us all. It's another attack on privacy. RonPaulLibertyReport
Posted by Angelo Agathangelou at 5:53 pm No comments:

Human Rights Watch has condemned an Israeli court ruling on the expropriation of Palestinian Bedouin lands, saying the verdict will pave the way for the eviction of Palestinians.
By Press TV: "It is a sad day when Israeli Supreme Court decisions provide legal cover for forced evictions, as in the case of these two villages," Sarah Leah Whitson, HRW's Middle East and North Africa director said in a statement on Wednesday, said in reference to the villages of al-Araqib and Shariaa in northern Negev. 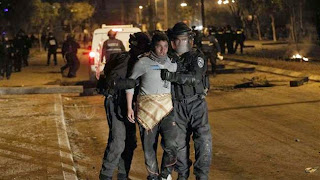 The Israeli Supreme Court has ordered the confiscation of a 100-hectare piece of land, owned by Palestinian Bedouins, near the two villages.
The land is the inheritance of the Palestinian al-Ukbi tribe, who have dwelled there and farmed the land for decades.
But the Israeli Supreme Court ruled that the ground should be registered under the name of the so-called Israeli Development Authority.
"The Israeli government should let these communities stay where they are, not force them to move yet again," Whitson said.
The court decision ignores "international law in upholding discriminatory evictions by the Israeli authorities in the occupied territories," she added.

Sandra Bullock Admits: Even As A “Strong Independent” Woman, She Still Wants To Serve The Cock

No matter how independent a woman is, she ultimately wants to serve a man... Red Pill Philosophy
Posted by Angelo Agathangelou at 12:31 pm 2 comments:

Calls by various mainstream economists to ban cash transactions seem to be getting ever more louder.

By Erico Matias Tavares: Bills and coins account for about 10% of M2 monetary aggregates (currency plus very liquid bank deposits) in the US and the Eurozone. Presumably the goal of this policy is to bring this percentage down to zero. In other words, eliminate your right to keep your purchasing power in paper currency.
By forcing people and companies to convert their paper money into bank deposits, the hope is that they can be persuaded (coerced?) to spend that money rather than save it because those deposits will carry considerable costs (negative interest rates and/or fees).
This in turn could boost consumption, GDP and inflation to pay for the massive debts we have accumulated (leaving aside the very controversial idea that citizens should now have to pay for the privilege of holding their hard earned money in a more liquid form, after it has already been taxed). So at long last we can finally get out of the current economic funk.
The US adopted a policy with similar goals in the 1930s, eliminating its citizens’ right to own gold so they could no longer “hoard” it. At that time the US was in the gold standard so the goal was to restrict gold. Now that we are all in a “paper” standard the goal is to restrict paper.
However, while some economic benefits may arguably accrue in the short-run, this needs to be balanced in relation to some serious distortions that could rapidly develop beyond that.

Read more »
Posted by Angelo Agathangelou at 8:59 am No comments:

So here are some of the things, I think, our global Over Class would like to achieve and how they intend to achieve them.
1) The Over Class must retain and consolidate their control over the global system of debt.
2) The power to regulate must be taken from nations and effectively controlled by corporations. 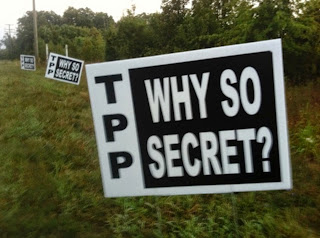 3) Professionalize governance. Democracy can be and must be neutered, and an effective way of doing this is to insist that amateur, elected officials MUST take the advice of professional (read corporate) advisors. Expand current law to enforce this.
4) The financial system badly needs un-encumbered ‘assets’ to feed the debt issuing system. A new way must be found to pry sovereign assets from public ownership. Such a new way is suggested.
5) In order to facilitate the political changes necessary, the public mind-set must be changed. National Treasures such as the NHS in Britain must be re-branded as evil State Monopolies.
6) Effective ways must be found to convince people that democratic rule is no longer sufficient to protect them.

Max Keiser and Stacy Herbert discuss the demand for human rights for great apes as humans themselves agree to give up their own so that one bad guy might not enjoy them, too.

Need A Job? Saudi Arabia Is Looking For Eight Swordsmen To Keep Up With Record Beheadings

By Michael Krieger: Looking for work and want to help out one of the U.S. government’s closest global allies at the same time? Well today might be your lucky day.
All you have to do is be willing to sever the heads of human beings accused of committing victimless crimes.

No qualifications are necessary. 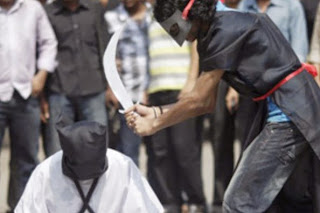 From the AFP:
Riyadh (AFP) – Saudi Arabia advertised vacancies for eight executioners Tuesday after beheading nearly as many people since the start of the year as it did in the whole of 2014.

The civil service ministry said that no qualifications were necessary and that applicants would be exempted from the usual entrance exams.


It said that as well as beheadings, the successful candidates would be expected to carry out amputations ordered by the courts under the kingdom’s strict version of Islamic sharia law.

Read more »
Posted by Angelo Agathangelou at 2:19 am No comments: 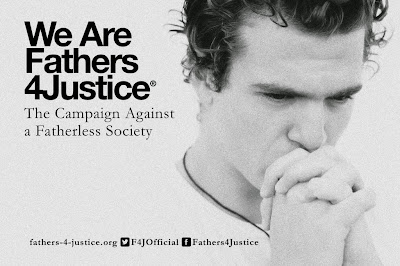 A national newspaper magazine is looking for a 35-50 yr old man to talk about the impact of divorce / separation on his life, the fallout from this (depression, suicide) and how he felt about his role in society afterwards. If you are interested please send a few lines about your case to matt@fathers-4-justice.org with the title MEDIA REQUEST in the heading BEFORE 4.00pm Wednesday 20th May. Please note emails will be passed to the relevant publication and will not be responded to.
Posted by Angelo Agathangelou at 12:26 am No comments: