The Salvation Of Greece - Prepare Yourself Accordingly

Financial instability has caused a massive bank run in Greece which has resulted in billions of Euros in cash being withdrawn as of Friday night. Despite maneuvering from the Greek Central Bank, the European Central Bank and those in the European Union - this situation is completely unsustainable. So what's next? What can be done in the event of economic collapse to allow Greece a sustainable future? Will Greece stay stick with the Euro? Will Greece leave the European Union? Stefan Molyneux
"The enemy has only images and illusions behind which he hides his true motives. Destroy the image and you will break the enemy." Bruce Lee from Enter the Dragon.
Posted by Angelo Agathangelou at 11:25 pm No comments: Links to this post

By ANDRE VLTCHEK: At the Museum of Contemporary Art (MOCA), in Los Angeles, a gigantic, carnivorous flag with torn ends was waving in an artificial wind created by enormous propellers. There were no visitors at the exhibition. For a while I thought that in all this huge space I was totally alone. But soon I noticed two figures in black torn dresses, moving slowly, in semi-darkness, desperately clinging to the walls. Backs bent, they passed by the bookstore right near the place where someone had put a small sign on the wall that said, “I cannot breathe!”

Most likely it was a performance, a desperate protest action of one man and one woman, a performance against this giant all-devouring flag.
“I cannot breathe!” A man shouted before he died, before he was murdered by the regime.
“I cannot write!” I thought. Which to me was almost the same as not being able to respire.
***
It was the first time in many years that I had missed my column, my essays, for several weeks.
Even when I was arrested in the Democratic Republic of Congo, in Kenya, in Senegal, I still managed to write.
I managed to write after a deranged, evangelical and fascist preacher paid hotel staff to poison me in the Indonesian city of Surabaya.
I wrote in many warzones and desperate slums, from Iraq to Mindanao, from Haiti to Marshall Islands.
But I couldn’t write in the United States of America. Not one single line, not one word. Not this time.

By Orwellians: This is what Pevensey Coastal Defence Ltd has to say about rising sea levels, a phenomenon that has been going on for at least 15,000 years, LONG BEFORE mankind started speeding around in SUVs and Ferraris:

“The image below shows schematically how sea levels have risen since the last ice age and that the sea only reached Pevensey about 5,000 year before today. Outcrops of chalk on the Channel floor are shown in pink, and it is flint from this chalk that is likely to have contributed to the beach material that was pushed northwards by the rising sea level.”

Read more »
Posted by Angelo Agathangelou at 8:00 pm No comments: Links to this post

The Guardian Interview With Fathers4Justice Founder Matt O’Connor: ‘I thought I could change the world in three years’

Fathers4Justice: Attention-seeking? Yes. Self-aggrandising? Yes. Sort of admirable for sheer chutzpah? I think so. Fathers4Justice is best-known for a series of stunts featuring dads dressed as superheroes – climbing bridges and buildings to promote the belief that fathers are discriminated against in family law. Do they have a point? 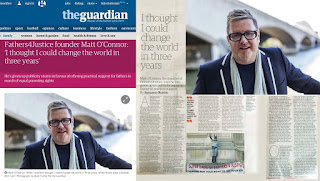 Or are they a bunch of hotheaded misogynists, more interested in declaiming on the subject of male victimhood, and being on the news in Batman suits, than in anything so mundane as paying child maintenance or taking their children to swimming lessons?
Matt O’Connor, who founded the group after a bitter dispute over access to his own sons 14 years ago, admits that they hated his activism when they were younger, “and I don’t think they’ve warmed to it – Dad’s never hip, never, so it’s put your heads down and don’t mention it”.
But there was a moment when it looked as though O’Connor’s campaign of direct action, begun in 2002, might get results. Politicians expressed sympathy, not for the law-breaking protesters but for the issues they raised; so did public figures, including Bob Geldof (who fought a custody battle with Paula Yates over their three daughters). The “secrecy” of the family courts

Gilad Atzmon: It is pretty devastating to witness what Palestinians have to 'put up with'. Since Israel's election handed more power to the country's ultra-Orthodox Jewish Home, the voice of religious, nationalist settlers has grown vastly.
Posted by Angelo Agathangelou at 5:23 pm No comments: Links to this post

Submitted by Tyler Durden: In Athens on Friday, the ATM lines began to form in earnest.
(via Corriere)
Although estimates vary, Kathimerini, citing Greek banking officials, puts Friday’s deposit outflow at €1.7 billion. If true, that would mark a serious step up from the estimated €1.2 billion that left the banking system on Thursday and serves to underscore just how critical the ECB’s emergency decision to lift the ELA cap by €1.8 billion truly was. “Banks expressed relief following Frankfurt’s reaction, acknowledging that Friday could have ended very differently without a new cash injection,” the Greek daily said, adding that the ECB’s expectation of “a positive outcome in Monday’s meeting”, suggests ELA could be frozen if the stalemate remains after leaders convene the ad hoc summit. Bloomberg has more on the summit:

Dorothea Lambros stood outside an HSBC branch in central Athens on Friday afternoon, an envelope stuffed with cash in one hand and a 38,000 euro ($43,000) cashier’s check in the other.

She was a few minutes too late to make her deposit at the London-based bank. She was too scared to take her life-savings back to her Greek bank. She worried it wouldn’t survive the weekend.

What’s Really Going On At Fukushima?

Fukushima will likely go down in history as the biggest cover-up of the 21st Century. Governments and corporations are not leveling with citizens about the risks and dangers; similarly, truth itself, as an ethical standard, is at risk of going to shambles as the glue that holds together the trust and belief in society’s institutions. Ultimately, this is an example of how societies fail.

Tens of thousands of Fukushima residents remain in temporary housing more than four years after the horrific disaster of March 2011. Some areas on the outskirts of Fukushima have officially reopened to former residents, but many of those former residents are reluctant to return home because of widespread distrust of government claims that it is okay and safe.
Part of this reluctance has to do with radiation’s symptoms. It is insidious because it cannot be detected by human senses. People are not biologically equipped to feel its power, or see, or hear, touch or smell it (Caldicott). Not only that, it slowly accumulates over time in a dastardly fashion that serves to hide its effects until it is too late.
Chernobyl’s Destruction Mirrors Fukushima’s Future
As an example of how media fails to deal with disaster blowback, here are some Chernobyl facts that have not received enough widespread news coverage: Over one million (1,000,000) people have already died from Chernobyl’s fallout.
Read more »
Posted by Angelo Agathangelou at 2:07 pm No comments: Links to this post

False Accusations And The Denial Of Men’s Emotional Pain

By Tom Golden: I keep hearing that false accusations of rape make it harder on real victims of rape. Really? There may be a kernel of truth in this idea but it completely ignores the trauma and pain of the man who is falsely accused. The knee jerk reaction of most people is to worry over the woman and ignore the pain of the man.

My girlfriend was raped several years ago. I was falsely accused of rape less than a year ago. I contacted her (I had known her before her incident) because I was desperate for someone to talk to who would understand what I was going through. To my great relief, it turned out that we understood each other very well. From the initial stages of suicidal thoughts and not being able to function to the long-term fear, mistrust, and guilt that are facts of our lives, it turns out that her experience of being raped and mine of being falsely accused of rape were very similar.

Debt: War And Empire By Other Means

Jesse's Cafe Americain: This video below may help one to understand some of the seemingly obtuse demands from the Troika with regard to Greece.


The video is a bit dated, but the debt scheme it describes remains largely unchanged. The primary development has been the creation of an experiment called the European Union and the character of the targets. One might also look to the wars of 'preventative intervention' and 'colour revolutions' that raise up puppet regimes for examples of more contemporary economic spoliation.