By Michael Krieger: A 1,176 page Pentagon war manual was recently released that hasn’t received the attention it deserves. The book of combat instructions, titled “Department of Defense Law of War Manual,” apparently covers rules of war for all branches of the U.S. military. 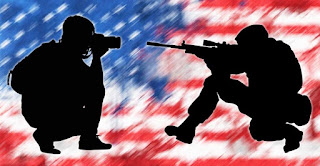 One passage in particular is generating controversy, where journalists seem to be thrown into a convoluted and opaque category, in which they could be seen as “unprivileged belligerents” as opposed to civilians. Naturally, this has sparked concern that journalists the U.S. government doesn’t like could be lumped into the “unprivileged belligerents” category and subsequently murdered at will. The Washington Times covered this story, here are a few excerpts:

The Pentagon’s new thick book of instructions for waging war the legal way says that terrorists also can be journalists.

The manual pushes aside the George W. Bush-era label of “unlawful enemy combatant” for al Qaeda and the like. The new term of choice: “unprivileged belligerent.”

Read more »
Posted by Angelo Agathangelou at 11:54 pm No comments: Links to this post

Apparently women you've never met are more important than your son...just because they're women and he's a boy. Mrminibagel
Posted by Angelo Agathangelou at 8:10 pm No comments: Links to this post

Juncker To Greece: "Don't Commit Suicide Just Because You Are Afraid Of Death"

Submitted by Tyler Durden: In as brash an instance of lying propaganda as we have seen recently EU President Jean-Cleaude "when it's serious you have to lie" Juncker unleashed 6 minutes of unabashed falsehoods this morning as the fearmongering and blame-shame-game for Greece begins. He proclaimed that "pension cuts were not in the creditors proposals" which as many pointed out is a total lie and then said: "You shouldn’t commit suicide because you're afraid of dying. You should say 'yes' regardless of what the question is." Got that Greek Grandmas - Vote YES no matter what you think - that's how EU democracyu works...

...So when Drake Bell, a former American child star, tweeted ‘Sorry… still calling you Bruce’, he became the subject of global fury. The Cult of Caitlyn went insane. Even after Bell deleted his blasphemous comment, tweeters mauled him, suggesting he deactivate his Twitter account, or better still, ‘deactivate his life’.

The Dangers Of Being A Social Progress Parasite

Stefan Molyneux answers a listener question by making a passionate rant against being a social progress parasite.

Question: When is a good time to change someone’s mind? We live in a society where I feel that most people don't want to argue with each other - because both sides know that they are not prepared enough or have enough time to convince another person - or are in a too awkward place to argue. Can you balance the coexistence and friendship with arguing and debate?

Raging Golden Eagle: Ew, I just noticed I used the term "privilege" multiple times. I need to have my mouth washed out with soap.

Read more »
Posted by Angelo Agathangelou at 8:15 am No comments: Links to this post

Does HSBC Know Something Other Banks Don’t?

By Don Quijones: Global bankster behemoth HSBC is not having a good 2015, despite celebrating its 150th anniversary. It has been implicated in even more scandals than usual, faces a 5% increase in dividend costs in its adopted home country, the UK, and has decided to lay off another 25,000 workers worldwide. It’s also selling off its Brazil and Turkey units and is even threatening to up sticks from the City of London and move its headquarters back to Hong Kong.

Which begs the question: why such drastic restructuring? More to the point, why now?
Back to the Past
According to HSBC, the move is aimed primarily at restoring investor confidence. Its decision to sell its operations in Turkey and Brazil forms part of a strategic reorientation toward East Asian markets, where HSBC originally cut its teeth 150 years ago (laundering the proceeds from the British East Indian company’s opium trade, as I documented here), and where margins are currently much higher than in Brazil and Turkey.
HSBC’s loss of interest in the Brazilian and Turkish markets is down to two main factors, according to Foreign Policy magazine: first, both markets are slowing down at an alarming rate; and second, they don’t offer the same get-richer-quicker opportunities available in the more unequal markets of the East:


In Brazil, assiduous redistribution by the governments of Luiz Inácio Lula da Silva and Dilma Rousseff has, for all their faults, evened out the income distribution to a historic degree. In Turkey, income inequality is also lower than it was when HSBC made its big acquisitions.
Read more »
Posted by Angelo Agathangelou at 7:14 am No comments: Links to this post

We Restarted The Cold War: The Real Story About The NATO Buildup

Our leaders and media push time-worn nonsense about American innocence, while taking aggressive moves. Look out
By Patrick L. Smith: Have you picked up on the new trope du jour? We are all encouraged to bask in our innocence as we lament the advent of a new Cold War. The thought has been in the wind for more than a year, of course, at least among some of us. But we witness a significant turn, and I hope this same some of us are paying attention.
As of this week, leaders who know nothing about leading, thinkers who do not think and opinion-shaping poseurs such as Tom Friedman are confident enough in their case to sally forth with it: The Cold War returns, the Russians have restarted it and we must do the right thing—the right thing being to bring NATO troops and materiel up to Russia’s borders, pandering to the paranoia of the former Soviet satellites as if they alone have access to some truth not available to the rest of us.
James Stavridis, the former admiral and NATO commander, quoted in Wednesday’s New York Times: “I don’t think we’re in the Cold War again—yet. I can kind of see it from here.”
I can kind of see it, too, Admiral, and cannot be surprised: NATO has missed the Cold War since the Wall came down and the Pentagon’s creature in Europe commenced a quarter-century of wandering in search of useful enemies. At last, the very best of them is back.

Read more »
Posted by Angelo Agathangelou at 5:34 am No comments: Links to this post

Zio-Fascist War Ships have reportedly captured a Swedish peace ship en route the Gaza Strip to break the regime's long-time blockade of the Palestinian sliver.
Press TV: Contact was lost earlier with one of the vessels of the Gaza-bound Freedom Flotilla III as Israeli navy ships approached the convoy, the Freedom Flotilla Organization said. 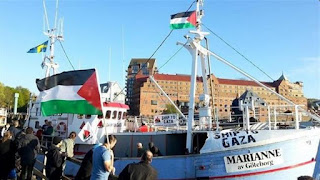 The Swedish-registered  the Marianne of Gothenberg was surrounded by Israeli gunboats while it was on the way to Gaza in an attempt to break the siege.
According to the Freedom Flotilla Coalition (FFC), their latest contact with the Marianne boat was when she was still in the international waters, about 105 nautical miles off the Gaza coast.
The group added that three sailing boats accompanying Marianne -- Rachel, Vittorio, and Juliano II – have changed their course and are returning to their ports of departure.
“We demand that our respective governments act with humanity and to ensure the safety of all of the delegates on board the Marianne,” the campaigners said on their website.

Read more »
Posted by Angelo Agathangelou at 3:19 am No comments: Links to this post