Henry 'Scoop' Jackson was a cold war hawk veteran of the US congress, always pushing for more weapons, more war, yet when the British neocons were casting around for a peg to hang their top hats on, they oddly fastened upon the obscure and largely forgotten Jackson. A group of British academics together with the Cordoba Foundation have recently published chapter and verse about these “go to” guys for a witch-hunt.

Sandman: Ancient Sparta was under a sort of cultural and social Marxism. And in my video about feminism in Ancient Rome I hinted that women in ancient Sparta ran the economy while men were doing all the military work. And as a result Sparta collapsed. That's what I read and I want to explore if that's accurate or not and also figure out how gynocentrism functioned in that society. Spartan women would have their sons taken away from them at the age of seven but the girls stayed with their mothers until they married in their late teens and early twenties.

Read more »
Posted by Angelo Agathangelou at 8:56 pm No comments: Links to this post

Paul Elam: Don’t Throw The Baby Out With The Bathwater

By Janet Bloomfield (aka JudgyBitch): One of the nice things about working online is developing close, professional and personal relationships with other people who share your interests and passions without needing to be physically present in each other’s lives. As most of you know, I am very close with many staff members at AVfM, including the CEO, Paul Elam, and how frustrating it must be for my haters that they can’t accuse me of fucking him to gain power and influence. If we worked in the same physical location, you can be dead sure feminists and SJWs would line up to blast me with their misogyny and gutter minds. As it stands, they have to be content with accusations of sending sexy selfies. Of course, I sent that to the whole internet to make a point about harassment, but what are facts when you have an ideology to grind?

I’m reprinting this article today in lieu of my regular post, because it contains an idea I find quite radical: men’s space is in their minds. What men need to do is create an internal space that doesn’t place the needs of women first, and isn’t afraid of women’s anger at being taken off the pedestal.
"Men’s challenge is not to defend male space, but to create it. Male space, the kind that matters, is not on golf courses or locker rooms. It is within the sanctity of their own minds and hearts. It is in the ability to tend to their own needs rather than blindly surrender to reproductive instinct, laying waste to their dignity and leaving their brothers under the bus along the way."

….blindly surrender to reproductive instinct….
Read more »
Posted by Angelo Agathangelou at 6:28 pm No comments: Links to this post

"Mayor of New York is insane and incapable of minding his own business. ...This is what fascist bullshit looks like." Lucian.

Read more »
Posted by Angelo Agathangelou at 3:24 pm No comments: Links to this post

"Rapists don't get high fives and the government is not funding rapists." Lauren Southern talks with AJ about the insanity that is modern feminism.
Posted by Angelo Agathangelou at 12:41 pm No comments: Links to this post 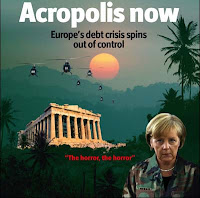 Submitted by Tyler Durden: As we said earlier today, following today's dramatic referendum result the Greeks may have burned all symbolic bridges with the Eurozone. However, there still is one key link: the insolvent Greek banks' reliance on the ECB's goodwill via the ELA. While we have explained countless times that even a modest ELA collateral haircut would lead to prompt depositor bail-ins, here is DB's George Saravelos with a simplified version of the potential worst case for Greece in the coming days:


The ECB is scheduled to meet tomorrow morning to decide on ELA policy. An outright suspension would effectively put the banking system into immediate resolution and would be a step closer to Eurozone exit. All outstanding Greek bank ELA liquidity (and hence deposits) would become immediately due and payable to the Bank of Greece. The maintenance of ELA at the existing level is the most likely outcome, at least until the European political reaction has materialized. This will in any case materially increase the pressure on the economy in coming days.

All of which of course, is meant to suggest that there is no formal way to expel Greece from the Euro and only a slow (or not so slow) economic and financial collapse of Greece is what the Troika and ECB have left as a negotiating card.

By Mike Buchanan: Our thanks to John for this photograph of Natalie Bennett at Glastonbury, opposing ‘mansplaining’. We enjoyed William Gruff’s comments on the original blog post, posted earlier today:

‘Mansplaining’ is any rational refutation of feminist stupidity that misandrous women cannot counter. That aside, you can rest assured that men don’t vote for the Greens – manginas yes, men no.

Ms Bennett’s profile on the Green Party website, the emphasis is mine:

Natalie has been the elected leader of the Green Party since September 2012. She was previously the Co-ordinator of Camden Greens and founding chair of the Green Party Women’s Group. In the 2015 General Election, she stood in Holborn and St Pancras, winning 13% of the vote.

Greeks Vote NO To EU-Imposed Austerity

By Paul Craig Roberts: With 90% of the votes counted, the Greek people have voted 61% to 39% against accepting the latest round of austerity that the EU is trying to impose on the Greek people for the benefit of the One Percent. What is amazing is that 39% voted for the One Percent against their own interests. This 39% vote shows that propaganda works to convince people to vote against their own interest.

The vote was not a vote to leave the EU. With the backing of the Greek nation, the Greek government hopes to reopen negotiations with the EU and to find a solution to the debt problem that will actually work. The EU objects to the Greek people having a voice in their fate, and unless common sense prevails is inclined to disregard the vote and to maintain the EU’s inflexible position that the debt issue can be resolved only on the EU’s terms. As has been made perfectly clear, these terms are more looting of the Greek economy by the One Percent.
As the Greek banks are closed and evidently cannot reopen without a resolution of the issue, EU inflexibility would force Greece to leave the euro and return to its own currency in order to reopen the banks. This would not require Greece’s departure from the EU as the UK and one or two other EU member states have their own currencies. However, most likely the EU and Washington and Washington’s Japanese, Canadian, and Australian vassals would attack the new Greek currency and drive its value in exchange markets to such a low value that Greece could not import and wealth held in Greek currency would be worthless abroad.

Laci Green is not a sex educator, she is a feminist using a sex show to spread morbid ideas about male sexuality. Feminism LOL