Feminism Then Vs. Now

First wave feminism vs. feminism today. A bit different. Exaggerated and all in good fun. I ruined my pants. I hate ketchup. It smells bad. Julie Borowski

Read more »
Posted by Angelo Agathangelou at 11:41 pm No comments: Links to this post

Reported by Gilad Atzmon: A new Jewish Chronicle poll just ahead of Sabbath reveals that “almost seven in 10 British Jews are concerned about the prospect of Jeremy Corbyn becoming leader of the Labour Party.” 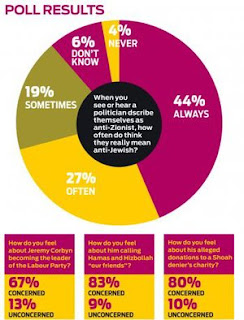 The polling, conducted earlier this week, reveals the depth of anxiety within the Jewish community about Labour’s future direction.
Asked how they feel about Mr Corbyn becoming leader, 67 per cent say they are “concerned”, with only 13 per cent responding “unconcerned”.
Eighty-three per cent of British Jews say they are concerned by comments — which were presented in full to respondents — in which Mr Corbyn referred to the democratically elected Hamas and Lebanese resistance Hizbollah as “our friends”.
Asked about Mr Corbyn’s links to Jewish truth seeker Paul Eisen, 80 per cent are concerned.
That may mean that Paul Eisen is well ahead of Corbyn in upsetting Jews. I would actually expect Corbyn to accept defeat, resign from the Labour leadership contest and invite Paul Eisen to take his place.
Posted by Angelo Agathangelou at 9:27 pm No comments: Links to this post 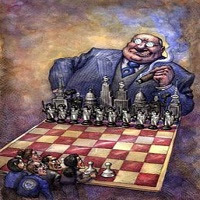 By Don Quijones: Since the financial sectors of Southern Europe and Ireland hit the rocks during the height of Europe’s sovereign debt crisis, many of their respective banks have grown dependent on the generosity of the ECB – a generosity that, as Greece recently learned to its great cost, has its limits.
In the last three years, the banks of Europe’s biggest bailed out economy, Spain, have received ultra-low interest loans from the ECB worth some €140 billion. To obtain that liquidity, the banks are required by law to deposit collateral with the ECB. However, Germany’s leading business and financial newspaper Handelsblatt now reveals that some Spanish banks have received special treatment from Spain’s central bank, the Banco de España, some of whose officials have shown no qualms about bending the rules:

Nature Decrees That Women Tend To Regret The One Night Stand

By Laurence Hodge: The Sun recently ran a piece about a philandering footballer and accompanied it with an attractive photo of the twenty-year-old Belgian model who had contributed her own but far from unique notch in the errant goalie’s moving bedpost.
She was incensed to find out after the event, so to speak, that the man had a child with another woman and a track record of amorous entanglements as long as your arm and already in the public domain.  It’s odd in these days, where almost every aspect of human activity necessitates a risk assessment, that a woman can almost simultaneously feel exonerated from assuming any responsibility for her own person and aggrieved at the inevitable consequences.

Perhaps the young woman who aspires to be Miss Belgium is chiefly interested in world peace and is looking forward to working with children so thinking things through may not be her particular strength.  Perhaps as a gentle and slightly gullible soul, she might be just as prone to falling into bed with a footballer as to cuddling kittens.
However, the brightest young women should be able to be rather more self-aware and yet the dispensations of modern radical feminism mean instead that they also engage willingly in more or less spontaneous and ill thought-out acts of congress,  with the difference that they aggressively lay off responsibility for their subsequent feelings of remorse and guilt on the luckless fellows with whom they coupled.

Read more »
Posted by Angelo Agathangelou at 6:15 pm No comments: Links to this post 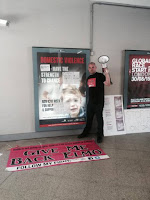 The fathers rights group have been protesting against the “Dads, have the strength to change” posters, claiming they are offensive to fathers and are sexist and discriminatory.
Terry Vooght from Harrow and Bobby Smith from Stevenage stuck New F4J stickers and banners over the campaign posters including one A4 sticker that read ‘Please let me see my dad’
Within minutes the TFL called the police and arrived.
Mr Smith said: “We decided to come and cover the poster… Transport for London and the Met Police were not happy. There was mayhem at Woolwich station.
“Four police cars and six police turned up to throw us out because we covered that sexist poster up. Our version was better.
“London Mayoral candidate Tessa Jowell has vowed to ban ‘sexist’ adverts in London’s Tube stations and on buses but as yet remains silent on this campaign.”

The Church In Putin's Eyes

"He's [Putin] reviving the Orthodox tradition of symphony of church and state and that puts Jews out of power. ...Moral backbone strengthens society, sin is a reproach to any nation." Brother Nathanael
Posted by Angelo Agathangelou at 5:56 am No comments: Links to this post

P.I.G. America: A Land Where Justice Is Absent

America’s First Black President is
a traitor to his race and also to justice.

By Paul Craig Roberts: Obama has permitted the corrupt US Department of Justice (sic), over which he wields authority, to overturn the ruling of a US Federal Court of Appeals that prisoners sentenced illegally to longer terms than the law permits must be released once the legal portion of their sentence is served. The DOJ, devoid of all integrity, compassion, and sense of justice, said that “finality” of conviction was more important than justice. Indeed, the US Justice (sic) Department’s motto is: “Justice? We don’t need no stinkin’ justice!”
Alec Karakatsanis, a civil rights attorney and co-founder of Equal Justice Under Law, tells the story here. See also here. The concept of “finality” was an invention of a harebrained Republican conservative academic lionized by the Republican Federalist Society. In years past conservatives believed—indeed, still do—that the criminal justice system coddles criminals by allowing too many appeals against their unlawful convictions. The appeals were granted by judges who thought that the system was supposed to serve justice, but conservatives demonized justice as something that enabled criminals. A succession of Republican presidents turned the US Supreme Court into an organization that only serves the interests of private corporations. Justice is nowhere in the picture.
Appeals Court Judge, James Hill, a member of the court that ruled that prisoners did not have to serve the illegal portion of their sentences, when confronted with the Obama/DOJ deep-sixing of justice had this to say: “A judicial system that values finality over justice is morally bankrupt.”

Dr. David Duke: As I have said, I am not in any way an enemy of Alex Jones.
He has caused a lot of people to distrust the media, the government, banks and the great powers that are leading America, The West and the World to catastrophe. He is right in opposing the Global elite, but I believe we cannot defeat this elite if we don’t identify exactly who this elite is.
We must identify the elite that is in a war with European mankind and all humanity. 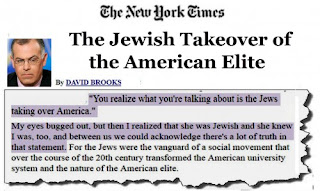 Even though Mr. Jones made snide attacks on me in his 30 minute challenge for the debate and in the debate made snide comments about whether I was a goblin or cyclops, etc. and using the completely false “white supremacist” attack in diatribes and caricatures of me before the debate as well as doing so a few times in the debate, I engaged in no name calling or ridicule of him. I could have cited a number of outrageous things he has said and done. I did not respond in kind. I was there to educate.
No. I came on his show at his own invitation to have an intellectual discussion on the world’s greatest problem, the globalist war on humanity, a war being waged on behalf of a small tyrannical tribal elite. Yes. I said it, the driving force behind The New World Order and Globalism is the Jewish Tribal Elite!