"You are the danger, you are the one who knocks!"
Yes, it's so amazing how the feminists took a difference of opinion and elevated the situation to actual physical violence, it's so cool. Rooch V, his real name should be Doosh B, because he is in fact a doosh bag of the highest calibre, ...however I would never endorse assaulting him, but apparently you do apparently you think that because he said words that your don't like, because he holds opinions you don't like that gives you the right to attack him. I disagree, I think that that is disgusting and that you're ten times as deplorable as he is the second you turned it from something verbal into something physical." The Amazing Atheist

“Men only listen to their partners for 6 minutes but 25 if it’s their pals”
“Why are men incapable of listening to women?”

By mom4dads: Men just can’t listen to women. Women are important and must be listened to, even if you’re not interested in what they’re saying (like fashion or gossip or something) because, you know, reasons. Welcome to the religion of feminism. What about when women say that their husbands start talking about work or computers and they just pretend to listen and care? That’s OK, right, because it’s just men.
Jokes aside, I too have noticed that my husband seems not to listen to me. The difference is that, instead of accusing him of being a bad listener and starting a Twitter campaign like, say, hashtagallmenarebadlistenersohpoorme, I tried to figure out why he doesn’t listen to me. So I avoid talking about topics I know he cares nothing about. I choose the right time to speak, say, when he’s not tired or busy doing something. And so on. Basically, I use common sense, kindness and compassion. But feminism doesn’t even know what that means. Source
Posted by Angelo Agathangelou at 8:49 pm No comments: Links to this post

The Biggest Question Of All: Are You A Feminist, Or Not?

By Luigi Logan (aka Fidelbogen): We all need to make up our minds. Every last one of us. We are, all of us, either one thing or the other: feminist, or not feminist. There is no middle ground. There are no shades of gray. There are no blurred lines. There is no fence to sit upon.
You are either a feminist, or you are not a feminist. Isn’t that simple?
So, what does it mean in practice, to say that you are either a feminist or not a feminist? In practice, it means that you should take one second, at the very most, to make your decision. If I were to inquire, “are you a feminist?”, you would respond either yes or no . . . . in a flash!
You ought not to vacillate. If you need to pause and think about it, then you might as well just call yourself a feminist until you finally get your head straight. The force which pulls you instinctively away from feminism ought to be so powerful that it operates instantaneously. It ought to be second nature.
Naturally, we’d rather you were not a feminist at all, but the important thing is to make your mind up. It is not nearly so bad to be a feminist, as to be a fence-sitter. To be a fence-sitter is to be woefully uninformed about the political situation. Your “middle ground” between feminist and non-feminist is a melting iceberg, a transitory condition that will not last. It is an illusion, a state of existential dithering, and to occupy such a position is to be a morally two-headed creature with no stable identity — or if you will, no GPS coordinates on the political map.
The middle ground illusion emerges from the notion that there is a “good” feminism and a “bad” feminism which can be teased apart from each other.

Read more »
Posted by Angelo Agathangelou at 7:09 pm No comments: Links to this post

It is now legal for law enforcement in North Dakota to fly drones armed with everything from Tasers to tear gas thanks to a last-minute push by a pro-police lobbyist.

With all the concern over the militarization of police in the past year, no one noticed that the state became the first in the union to allow police to equip drones with “less than lethal” weapons. House Bill 1328 wasn’t drafted that way, but then a lobbyist representing law enforcement—tight with a booming drone industry—got his hands on it.

– From the Daily Beast article: First State Legalizes Taser Drones for Cops, Thanks to a Lobbyist
By Michael Krieger: You could see the writing on the walls years ago. In an increasingly authoritarian, lawless, surveillance state like America, it was always inevitable that drones would be weaponized. In North Dakota, this is now a reality.
Although I haven’t written much about domestic drones as of late, I published many articles on the topic several years ago. In the 2012 piece, Drones in America? They are Already Here…I warned:
Like with any new technology, drones can be put to good use or to evil use.  Just like nuclear power can harness energy or destroy humanity altogether, drones could do a lot of good, but the problem is that the government is clearly moving more and more towards a surveillance state so we must be extra careful.  Stay vigilant.

Read more »
Posted by Angelo Agathangelou at 5:48 pm No comments: Links to this post

"He [Trump] hired the well connected and mobbed up Roy Cohn, ...as legal council, ...without a high power Jewish lawyer in hymietown you might as well fold up. It's the place where Jewish business and organised crime meet and Cohn knew just how to shuffle the cards. ...You don't become a Manhattan real estate mogul without seeding the kosher pot. Trump knows how hymietown works. ...If Obama giving Israel 3 billion a year is the worst thing that ever happened to Israel then imagine what Trump will do." Brother Nathanael

These Guys Are So "Lucky"

Can we please hold women to the same standards that we hold men? 6oodfella
Read more »
Posted by Angelo Agathangelou at 11:37 am No comments: Links to this post 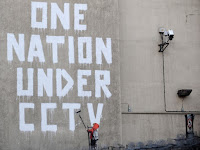 Cannataci says we are dealing with a world even worse that anything Orwell could have foreseen. “It’s worse,” he said. “Because if you look at CCTV alone, at least Winston was able to go out in the countryside and go under a tree and expect there wouldn’t be any screen, as it was called. Whereas today there are many parts of the English countryside where there are more cameras than George Orwell could ever have imagined. So the situation in some cases is far worse already.
– UN Privacy chief, Joseph Cannataci
By Michael Krieger: The UN special rapporteur on privacy, Joseph Cannataci, pulls no punches when it comes to privacy. It’s hard to disagree with what he has to say.
From the Guardian:

The first UN privacy chief has said the world needs a Geneva convention style law for the internet to safeguard data and combat the threat of massive clandestine digital surveillance.
Speaking to the Guardian weeks after his appointment as the UN special rapporteur on privacy, Joseph Cannataci described British surveillance oversight as being “a joke”, and said the situation is worse than anything George Orwell could have foreseen.

Western Democracy Is An Endangered Species On Its Way To Extinction

By Paul Craig Roberts: The British Labour Party no longer represents the working class. Under UK prime minister Tony Blair, the Labour Party became a vassal of the One Percent. The result has been a rebellion in the ranks and the rise of Jeremy Corbyn, a principled Labourite intent on representing the people, a no-no in Western “democracies.”
Corbyn is too real for the Labour Party Blairites, who hope to be rewarded with similar nest eggs as Blair for representing the capitalist One Percent. So what is the corrupted Labour Party doing to prevent Corbyn’s election?
The answer is that it is denying the vote to Corbyn supporters. You can read the story here: http://www.globalresearch.ca/britains-labour-party-purge-is-underway-preventing-supporters-from-voting-for-jeremy-corbyn/5471194

The illegal Egyptian military dictatorship that overthrew on Washington’s orders the first democratically elected government in Egyptian history has issued an edict prohibiting journalists from contradicting the military dictatorship. In brief, the dictatorship installed by Washington has outlawed facts.
Washington rejected the government that the Egyptian people elected, because it appeared that the democratically elected government would have a foreign policy that was at least partially independent of Washington’s. Remember, according to the neocons who, together with Israel, control US foreign policy, countries with independent foreign policies, such as Iran, Russia, and China, are America’s “greatest threats.”

Digesting The Hate As A Black Men’s Issues Blogger

By Janet Bloomfield (aka JudgyBitch): Mumia ‘Obsidian’ Ali is someone I consider both a friend and a colleague. We get a lot of the same kinds of ‘criticism’, if you can call it that, based on the fact that neither one of us fit neatly into the mainstream media’s dogged insistence that people who care about men and boys are all middle-aged white guys who can’t get laid. Because I am a woman, I can get away with critiquing the actions and ideas of other women in a way that men simply can’t. And because Mumia is a Black man, he can get away with critiquing Black culture in a way that white people simply can’t. His work at AVfM is often met with what I call ‘stunned silence’, as readers process the radical ideas they know that, for the most part, they themselves cannot say.
It’s not fair, but that’s life, huh?
Here is Mumia discussing a recent attack on him from a Black feminist who thinks Mumia should sit down and shut up. Ain’t gonna happen, honey.

“If you’re a bitch, you’re probably not going to like us. If you’re a ho, you probably don’t like us. If you’re not a ho or a bitch, don’t be jumping to the defense of these despicable females. Just like I shouldn’t be jumping to the defense of no punks or no cowards or no slimy son of a bitches that’s men. I never understood why an upstanding lady would even think we’re talking about her.” Ice Cube.

Mumia ‘Obsidian’ Ali: Even though it’s been nearly six years since I embarked on my journey to be a men’s issues blogger, commentator and more recently Internet podcaster, I continue to be amazed and at turns, fascinated, by the level and degree of response my humble missives elicit from the varying sectors of the reading public.