By David Duke: The former chief of the Salzburger Nachrichten  newspaper in the beautiful city of Salzburg, Austria, Ronald Barazon,  has once again come out in support of the extermination of the Austrian and the European people with a continued tsunami of mass immigration.
Ironically, he used the Jewish supremacist state of Israel, which has some of the most restrictive immigration laws in the world, as an example of why immigration will be a good thing for Austria and Europe!
He had the chutzpah to point out that the immigration of 750,000 “Russians” into Israel has not hurt the economy or the well-being of Israel. Of course, he left the the inconvenient truth that the the 750,000 “Russians” were not Russian at all but were all fellow Jews.
This Jewish hypocrite advocates the genocide of Austria and Europe, yet Israel must be a “Jewish State  dedicated to Jews. He praises the Jewish-only immigration into Israel, but promotes the extermination of the European people and culture with massive immigration
He didn’t point out that Israel will not allow a marriage to be performed between a Jew and the “inferior goyim” (non-Jews) and that Israel is segregated society in schools, neigborhoods and settlements — and even highways!

We Should Be Doing More To Expose Paternity Fraud!

Hundreds of thousands of men in the UK are unwittingly raising children who are not their own having been duped by unscrupulous women. We should be making more of an effort to expose 'paternal discrepancy', keeping quiet is not an option!

By Gareth Rubin: It is the ultimate fraud. Across Britain, thousands of men are raising children that they have been tricked into believing are theirs, when they were really fathered by another man. And now one victim of paternity fraud is calling for it to be made a criminal offence after he spent six years bringing up a boy he thought was his son, only to find out that his wife had used the sperm from her ex-boyfriend at an IVF clinic.

The man sued her for the £60,000 he had handed over in child maintenance after they split up, but only gained a small amount of compensation, even though the judge said he had been a victim of “clear deceit and fraud”.
It sounds like an extreme and isolated case. But studies suggest somewhere between two and 10 per cent of men have been fooled into raising another man’s child.

If I Were US President - Brother Nathanael

"The very first thing I would do is set up a new 9/11 commission and trash the old one and after proving the attack was an inside job the shit will hit the fan. Israels Mossad would be indicted for installing interior demolition devices in the towers and Silverstein's doctor alibi will be debunked. Americans will then brand Israel as an enemy and the Jewish lobby as infiltrators. US foreign policy will then be freed up and leaders hated by Jews like Syria's Assad who protects Christians and Rouhani who battles ISIS will become our allies." Brother Nathanael.
Posted by Angelo Agathangelou at 3:12 pm No comments: Links to this post

By Gerald Warner: The knee-jerk reaction of the dinosaur Left to any large-scale upset in the markets is to proclaim ‘The Crisis of Capitalism’ – yet again. That tired old canard had its last major outing in 2008, but the Corbynistas and allied Marxist doom-mongers across the developed world may hesitate to pronounce the same verdict on the latest panic in the markets, since its architect is China, the world’s last communist superpower.

On the analogy of the term “Bastard Feudalism” – used by historians to characterise the increasingly diluted version of the feudal system that presaged its collapse – the present hybrid economic system in China might be described as Bastard Capitalism. But is what is happening in the West so very different from the situation in China? The micromanagement of business by the regulatory systems of the European Union, where new VAT rules have just forced thousands of small businesses to close, is one obvious parallel, but there are issues far beyond excessive regulation that are subverting capitalism in the West.

Read more »
Posted by Angelo Agathangelou at 1:56 pm No comments: Links to this post

Commentary by Dr. Patrick Slattery: Russian President Putin has said in a speach that the current human tsunami of refugees into Europe was “absolutely expected” and that he himself has publicly predicted such an outcome from “the West’s” misguided meddling in the Middle East and North Africa. Putin’s statements are correct as far as they go, but they don’t go far enough.

It’s not just that a refugee crisis could be expected, but as Dr. Duke and I have frequently pointed out on the David Duke Radio Show, a refugee crisis was part of the plan. Of course the Zio-fanatics in Israel and Washington wanted to weaken a Syrian state that they see as an enemy, and of course they want to pre-occupy Iran’s ally Bashar Assad in order to clear the way for a war against Iran.

The Dissident Dad: Everyday, I help my children get dressed. Our 1 year old baby loves having her shoes put on, my 3 year old daughter is obsessed with princess dresses, and my 5 year old, who dresses himself, can be most often seen wearing a red Lighting McQueen shirt.
I look into their faces, and I see so much happiness and joy. I don’t even need to do or say anything, just look into their eyes, and my children smile back radiantly.
Despite all our advancements as a species, our iDevices, the internet of everything, travel, and the ability to deliver fresh produce around the world, humanity still suffers from unspeakable horrors due to an inability to see ourselves within our fellow humans. We are so obsessed with our own needs, our own egos, and our tribalism to understand we are all in this together. Through all the suffering, we continue to go about our lives, forgetting about the pain happening to so many of our brothers and sisters. 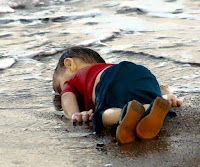 Although I am well aware of the realities of the world we live in, and despair about much of it often, something I saw this past week really hit home for me. A photo of a small toddler washed ashore recently brought me to uncontrollable tears.
There was this little boy, with his little 5 inch shoes on, wearing disheveled soaking wet shorts, and a red shirt fit just to his size. There he lay, dead on a beach.  Washed ashore while his family tried to escape the unimaginable nightmare of war.

Max Keiser and Stacy Herbert discuss the ‘frack now, pay later’ economics of a desperate energy sector. In the second half, Max interviews Michael Hudson, author of Killing the Host, about how the Finance, Insurance and Real Estate sectors compromise our economies.
Posted by Angelo Agathangelou at 4:42 am No comments: Links to this post

"People who want to go easy on women are objectively the true misogynists because they actually infantilize women. When you actually care about women you want to treat them their age, you want to treat them like adults, you want to hold them to the same standard of conduct and responsibility and accountability as you would hold yourself." Red Pill Philosophy Hitting women in self-defense needs to become normalized...
Read more »
Posted by Angelo Agathangelou at 2:57 am No comments: Links to this post