When The World Goes To Hell, It’s Men Who Die To Save Others. Remembering The First Responders Of 9/11

'They were not rapists or murderers or child abusers or sex offenders or incompetent bumbling idiots or any other negative, hateful stereotype we see and hear about men.' 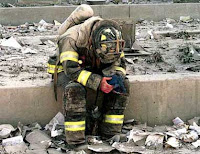 By Janet Bloomfield (aka JudgyBitch): Of the 2977 people killed on September 11th, 2001, 414 were NYC emergency personnel who responded to the attack. 341 firefighters, 60 police officers, 8 EMTs and 3 court officers.
Two of those responders were women. The other 412 were men.
Glance through any newspaper or magazine, browse the web, listen to the radio, watch television and you will be bombarded with the message that men are bad. They are rapists and murderers and wife-beaters and misogynists who delight in hurting women and take every opportunity to do so. That is the story feminism concocted about men and they have been horrifyingly successful in disseminating it widely. Men are treated with suspicion and often outright hatred, and the only reason for that is ironic –  because we are more or less living in one of the safest and most secure places on Earth.

By Way of Goldberg
Introduction by Gilad Atzmon: By now we are accustomed to the reality of false flag operations. We accept that for contemporary politically identified Jews, ‘by way of deception’ is more than often, a kosher procedure. Joshua Ryne Goldberg was arrested yesterday ahead of this week 911 commemorations. The young American Jew pretended to be a ‘Jihadi extremist’, he incited hatred ‘as a Muslim’ and advocated terrorism, he even called for murder...  I can only hope that the FBI will be kind enough to expose the network of Sayanim and Zionist clerics who inspired the young Jewish kid.
The Sunday Morning Herald Reports today “A young Jewish American man has been charged with pretending to be an Australian-based Islamic State jihadist after a FBI joint investigation with the Australian Federal Police based on information provided by Fairfax Media.


Read more »
Posted by Angelo Agathangelou at 9:50 pm No comments: Links to this post

Response To The Misandrist Charlotte Proudman

By Lizzie Cornish: Men, start standing up for yourselves. What this woman has done is awful in my view, and deeply unkind. It’s ‘All About Her’ basically..and, The SistaHood. She appears to have no empathy at all with the man whose life she’s just blown apart, nor with how his family must be feeling too. He made a PRIVATE, INNOCUOUS comment to her, after SHE had contacted HIM in the first place.
As a woman, I’m truly fecked off with these Feminists. NO MAN is safe in the UK any longer, due to what they are doing. I have a son, kind, gentle, loving, and he is now at grave risk, because all it will take to blight his life is ONE woman like this, who could tear him apart for her own ulterior motives…and SHE would be believed, supported, sympathized with, etc., whilst he would be seen as guilty, instantly, having done nothing, his name everywhere, his life blown apart.
This HAS to stop. And yes, with regard to her being a FGM lawyer, as mentioned in the video, I asked her that very question on Twitter, why she’s not out there fighting against Male Genital Mutilation too. She did not reply, but she has probably been overwhelmed by ‘tweets’ I’d imagine. I’m so SICK of these Misandrists and their vile sexist comments about men.

Read more »
Posted by Angelo Agathangelou at 8:15 pm No comments: Links to this post 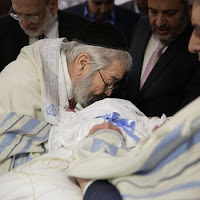 By Mike Buchanan: Words fail me. The start of the article:


The New York City Board of Health voted on Wednesday to ease regulations on a controversial circumcision ritual practised in the ultra-Orthodox Jewish community, fulfilling a priority of Mayor Bill de Blasio.
The vote repealed a Bloomberg-era rule requiring parents to sign a consent form before the ritual, which involves a person performing a circumcision, known as a mohel [witch doctor], to use his mouth to suck blood away from the incision on an infant’s penis. The practice has been linked to herpes infections in infants.

My Message For Gynocentric Media - MGTOW

Sandman: I want to give my message to the gynocentric media out there. More specifically mostly the feminist sympathizers and manginas that work in television, newspapers, radio and film industry. This is my message to you the employees of the lame stream media. You think that the television networks and existing media companies will be here forever paying you six figure salaries and providing you the job security you're accustomed to. You go out and you film feminists at their events like slutwalk and cover their issues and what's important to them. But at the same time I rarely hear you covering topics that are important to men. It's all about covering what's important to women.

Read more »
Posted by Angelo Agathangelou at 1:14 pm No comments: Links to this post

By Paul Craig Roberts: Millions of refugees from Washington’s wars are currently over-running Europe. Washington’s 14-year and ongoing slaughter of Muslims and destruction of their countries are war crimes for which the US government’s official 9/11 conspiracy theory was the catalyst. Factual evidence and science do not support Washington’s conspiracy theory. The 9/11 Commission did not conduct an investigation. It was not permitted to investigate. The Commission sat and listened to the government’s story and wrote it down. Afterwards, the chairman and cochairman of the Commission said that the Commission “was set up to fail.” For a factual explanation of 9/11, watch this film:


Read more »
Posted by Angelo Agathangelou at 11:04 am No comments: Links to this post

The Importance Of Failure: What Nobody Has Told You!

"Have you ever noticed that when some people set a goal for themselves, they also create obstacles to make themselves fail? And they do this, I think, because deep down they really don't want to achieve their goal and all the responsibility that comes along with it. I think it's because it's easier, and perhaps more gratifying, to have tried and failed, therefore earning the right to complain about how fate is to blame for their own misfortunes. This is essentially how fear of success manifests itself, I think. Would you agree, and if so, why do you think humans do this?"
Posted by Angelo Agathangelou at 9:16 am No comments: Links to this post

Mike Buchanan On Charlotte Proudman, Feminist Lawyer - Whiny Feminist Of The Month + SHE Ogled Men On The Web!

Mike Buchanan: Charlotte Proudman, the whiny 27-year-old feminist barrister who decided to publicly shame a 57-year-old male lawyer (working for another firm) for doing something that no reasonable person – feminists are excluded, by definition – would find wrong. Our award-winning media team were on standby to capture and edit the interview and a little earlier material.

Read more »
Posted by Angelo Agathangelou at 4:46 am No comments: Links to this post

Why Jews Support Tsunami-Gration: What’s Bad For Europeans Must Be Good For The Jews

Commentary by Dr. Patrick Slattery: As Dr. Duke has stated numerous times on his radio show, people often challenge his assertion that Jews are the driving force behind opening the borders in Europe to Muslim immigration. They cannot imagine why European Jews wouldn’t oppose the further increase in a minority that has been the source of considerable violence against Jews, such as the multiple attacks this past January that included Charlie Hebdo.

The article below from the Jewish Telegraphic Agency makes it crystal clear that the Jewish community is united in favor of accepting the ongoing invasion of migrants. In fact, they are dropping the “H-bomb” — Holocaust guilt. Count how many references to the Holocaust, Hitler, and the Nazis there are in the article below. The not-so-subtle message is that Europe must atone for the Holocaust by opening its borders and providing welfare for millions of permanent immigrants.

The murderous Israeli regime has once again detained nuclear whistle-blower, the hero Mordechai Vanunu, claiming that he violated the terms of his release from prison by telling the truth in a recent interview with a local TV station.

Press TV: The Thursday development came as the Israeli Channel 2 television broadcaster, which aired the interview with Vanunu on September 4, is battling with the regime’s police who demand the "full, unedited footage of the interview," Israeli media say.
The channel refuses to hand over the material, citing the journalistic principle of protecting sources.
In the lengthy interview on Israeli TV on Friday, Vanunu reportedly explained how he once exposed the existence of Israel’s nuclear arsenal and elaborated on a potential disaster which could emanate from Israel’s notorious Dimona facility.
The 60-year-old Vanunu said he had an obligation to reveal to the world the nature of the “powder keg” in Dimona, calling Israel’s entire nuclear strategy “a failure” that he had “exposed.”
Vanunu unveiled details of the Israeli regime’s nuclear weapons program to the British media back in 1986. He was imprisoned for 18 years and freed in 2004 under stringent conditions.