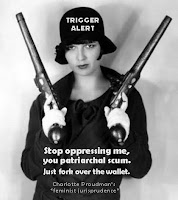 femifist: Lady All-Kneel welcomes Dame Valkyrie Hornwrencher, Head of Britain’s new National Sperm Bank, who is bringing a badly-needed feminist perspective to the previously male-dominated process of sperm donation.
When I was asked to create a National Sperm Bank for Britain, I marvelled at the wisdom of my recruiters. Who better than a woman to understand the many concerns that men have about donating sperm? I thought. And my feminine intuition immediately told me there were several huge challenges to overcome;
Sperm is traditionally hard to obtain, and the procedure involved is most unpleasant for a man. The current natural process of egg fertilisation is also inefficient and inappropriate in an age where women have busy, overworked lives. This state of affairs has resulted in a mere 3 billion pregnancies over the last 7 years. Clearly, there was a substantial need to spend taxpayer’s money improving this process.
So I set about creating an imaginative and eye-catching campaign to recruit sperm donors. As a woman, I know that men love competitions, so I employed slogans that would appeal to this instinct, such as “Most men have pathetic sperm. Let us publicly grade yours” and “Are you man enough to donate?

America, Home Of The Inhumanes

By Philip Giraldi: On April 29th, 2008 I had a Saul on the Road to Damascus moment. I had flipped open the Washington Post and there, on the front page, was a color photo of a two year old Iraqi boy named Ali Hussein being pulled from the rubble of a house that had been destroyed by American missiles. The little boy was wearing shorts and a t-shirt and had on his feet flip-flops. His head was hanging back at an angle that told the viewer immediately that he was dead.
Four days later on May 3rd a letter by a Dunn Loring Virginia woman named Valerie Murphy was printed by the Post. Murphy complained that the Iraqi child victim photo should not have been run in the paper because it would “stir up opposition to the war and feed anti-US sentiment.” I suppose the newspaper thought it was being impartial in printing the woman’s letter, though I couldn’t help but remember that the neocon-dominated Post had generally been unwilling to cover anything antiwar, even ignoring a gathering of 300,000 protesters in Washington in 2005. Rereading the woman’s complaint and also a comment on a website suggesting that the photo of the dead little boy had been staged, I thought to myself, “What kind of monsters have we become.” And in truth we had become monsters.

World War III - Who Will Be Blamed?

If you want to start a to war, the unwashed masses must be convinced to send their brothers, sons and fathers to die on the front lines. The specter of an external enemy must be etched into their collective mind through trauma, exaggeration and repetition. History must be whitewashed, twisted and cherry picked down to a politicized nursery rhyme. At no point should the real motives or consequences of such an endeavor be discussed.

Read more »
Posted by Angelo Agathangelou at 7:41 pm No comments:

"You've got dumb bitches making more dumb bitches, ...no father in sight and then you have this feminist movement. Please understand, feminism makes whores feel like they can hit men because of the laws. Here's what I think, if you are in school and you hit a teacher, the teacher should be allowed to fuck you up. If you are a woman and you hit a man, that man should be allowed to fuck you up. ...But we live in a society that rewards dumb ass behaviour." Tommy Sotomayor.

This Week In Stupid + How Feminism Set Men Free

"It's not uncommon to be told that non-Jewish people are evil in North London ultra-Orthodox Jewish schools. It is part of the prayers teaching their whole ethos," she said. Describing it as a form of "indoctrination", Ms Green added: "Psychologically, you become so afraid of the world out there after being taught how dangerous and bad and evil non-Jews are, that it makes it harder to leave." ...Another question asks "What did the goyim want to do with all the Jews?" - to which the answer, according to the work sheet, is: "Kill them."

Yet another group of Israeli land thiefs [aka settlers] have attacked yet another little eight-year-old Palestinian boy in a neighborhood of the occupied East al-Quds (aka Jerusalem), triggering violent clashes in the area, a local monitoring group says.


According to the center, the clashes erupted after local residents intervened to save the little boy.


At least 15 Palestinian rescuers were injured, some of them severely, during the clashes.

Read more »
Posted by Angelo Agathangelou at 12:11 pm No comments:

Compliment = Sexism According To @CRProudman

It's probably best if men just stop interacting with women. 6oodfella
Read more »
Posted by Angelo Agathangelou at 10:50 am No comments:

Is Catalonia About To Go All In?

An extremely high-stakes game of political poker, not just for Catalonia and Spain but for Europe. 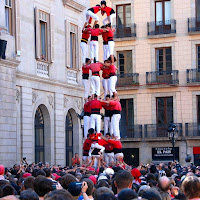 By Don Quijones: For a nation that doesn’t officially exist, Catalonia sure knows how to throw a national-day party. September 11, approximately 1.4 million people filled the streets of the region’s capital, Barcelona (urban population: 1.6 million), to commemorate La Diada, the fateful day 301 years ago when Catalonia was defeated during the War of the Spanish Succession.
This year’s event was widely praised, even among some unionists, for its near flawless organization, and once again the atmosphere was one of peaceful joviality, resolute defiance and collective hope.
But now the festivities are over, and the really hard work of nation building begins. Hope, catchy slogans, and huge demonstrations alone are not enough to create a new nation.

Jeremy Corbyn To Appoint A “Minister For Jews”

By Gilad Atzmon: A miracle was reported in Britain today, the Labour voted Left..

Israeli and the Jewish press are in a state of panic,
The Jewish Chronicle  reported tonight that "rumours emanating from the Corbyn camp within the last 48 hours suggested he wanted to appoint a “Minister for Jews” – an emissary to work with the community."
The Jewish Chronicle  seems to be excited about this possible development" Would he, for example, give the Jewish minister job to a Jew? Or would it go to a non-Jew who was friendly towards the community? What about a Jew who was unfriendly towards the community? It would be a minefield."

Read more »
Posted by Angelo Agathangelou at 3:22 am No comments:

With all the U.S.-trained fighters dead, captured or missing and their leader in the hands of Al Qaeda, top U.S. commanders are scrambling this week to determine how to revive the half-billion dollar program to create a moderate Syrian army to fight the Islamic State.

The outgoing chairman of the Joint Chiefs of Staff, General Martin Dempsey, who viewed the force as a critical element of the military strategy in both Syria and Iraq, is conferring with top Pentagon officials behind closed doors to figure out what options are left for what is widely considered a policy and military failure, according to senior defense officials.
Sen. Chris Murphy, the Connecticut Democrat who sits on the Appropriations Committee, returned from a trip to the region last week where he was briefed on the effort. His assessment of the program: “a bigger disaster than I could have ever imagined.”

– From the the Politico article: The Pentagon’s Syria Debacle
By Michael Krieger: American “leaders” have the anti-Midas effect when it comes to foreign policy. Everything they touch turns to shit. Everything.

Read more »
Posted by Angelo Agathangelou at 12:55 am No comments: