"Feminists you are crying wolf!" Thunderf00t. So 'The Sarkeesian Effect' is out. I can't tell you much about it as you have to pay to see it! However this was my interview for it. "SJW's and feminism are sociological AIDS!"
Posted by Angelo Agathangelou at 10:59 pm No comments:

"Don't be afraid to ask for help.
We need to look out for each other."
Messenger Rising
Read more »
Posted by Angelo Agathangelou at 8:54 pm No comments:

By Mike Buchanan: In two weeks’ time we’ll [J4MB] be supporting Men Do Complain (MDC), a hardworking anti-MGM campaigning organization, at a protest outside the Manchester Central venue, at the start of the Conservative party conference. More on this later in the blog post. 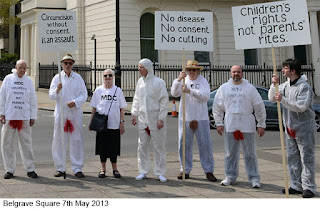 Regular followers of the J4MB blog know our #1 campaigning issue for the foreseeable future will be the non-therapeutic genital mutilation of male minors (henceforth ‘MGM’). It was one of 20 areas covered in our election manifesto (pp.9,10). Anyone who doesn’t understand why we consider MGM a grave assault upon the human rights of men and boys might like to familiarise themselves with some or all of the following materials:
William Collins’s blog piece (which explains, among much else, that the prime purpose of MGM is to diminish men’s pleasure during sex)
A renowned psychology professor condemns MGM
Global Survey on Circumcision Harm

Why Does Speaking Out About The Issues Men Face Always Trigger A Furious Reaction?

After editing a book in which 40 writers talk about what it means to be a man today, Dan Bell is still shocked by the hostility faced by those who speak up about men's issues

By Dan Bell: A few days ago I was at a party in liberal north-east London, when I was asked the inevitable question, “So, what do you do then?”
It’s a question I have come to dread. This isn’t because I’m ashamed of my work, or because I think it’s dull and uninteresting, but because I know that if I tell the truth, the warm and open conversation I’d been having with the person in front of me will often suddenly be replaced by a chilled and awkward silence.
You see, telling people I write about men’s issues often feels a bit like telling them I work for Exxon.
On this occasion, I weighed up the conversational fork in the road ahead of me, and decided to take the plunge and be honest, so I told her I’d just finished editing a book of 40 writers exploring what it means to be a man in the UK today. Her response was simply: “That’s brave.”

"Your hair is green like its been cleaned in a latrine." DoctorRandomercam.
Read more »
Posted by Angelo Agathangelou at 6:29 am No comments:

By Gilad Atzmon: In an open letter published in the Jewish Chronicle, notorious hard core Zionist David Hirsh advises the opposition leader what to do if he seeks ‘the trust of Jewish voters.’  As usual, Hirsh has produced an obscure document that reveals little other than the delusional level of Judeo-centrism symptomatic of Hirsh and his ilk.

Hirsh lists Corbyn’s ‘crimes:’ “You worked for Press TV, the Iranian regime's propaganda channel and you recommend Russia Today, Putin's version. You appear in cosy pictures with Hugo Chavez, with Hamas, with Gerry Adams (days after the Brighton bombing) and with Hezbollah. You said that Nato is the aggressor in Ukraine and that Daesh is no worse than the USA. You were the national chair of Stop the War even when it appeared to endorse the killing of British soldiers. You celebrated the anniversary of the Iranian revolution.”
Yet, despite this roster, Corbyn won the Labour leadership in a landslide victory that left the Blairites and the usual Sabbos Goyim far behind, isolated and humiliated. How did this happen? Simple, for the vast majority of Labour members, Corbyn’s ‘crimes’ were not a problem, quite the opposite. Labour party members made Corbyn their leader because they agree with the rationale behind his arguments and affiliations. They chose Corbyn as their leader because they are not happy with the Jewish Lobby hijacking their country’s politics.

Read more »
Posted by Angelo Agathangelou at 4:21 am No comments:

Max Keiser and Stacy Herbert discuss the sovereign reassignment surgery happening in so-called ‘privatization schemes’ as British companies are more comfortable (to politicians) draped in a French or German flag. In the second half, Max continues his interview with investment banker, Tony Gallippi and Marcel Roelants of Bitpay.com.
Posted by Angelo Agathangelou at 2:30 am No comments: