Why Men Accused Of Sex Attacks Should NOT Be Named

By SARAH VINE: Jimmy Tarbuck choked back tears as he told ITV’s Loose Women about his experience of being arrested by 14 policeman - 14 to nick an elderly comedian! - over allegations of assault of a child in the Sixties.
Now exonerated, Tarbuck, 75, is trying to rebuild his life. As is the DJ Paul Gambaccini, who last week gave an impassioned account of his own arrest and subsequent year of hell on police bail as part of Operation Yewtree.
Both men reminded me of a genial old gent I used to know, Alistair McAlpine, one time adviser to Margaret Thatcher. 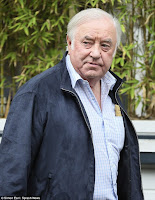 He was a kind, intelligent man who had hoped to spend his retirement running a guest house in Southern Italy with his glamorous young wife, Athena.
Instead, at the age of 70, he found himself thrust into the public eye in the cruellest of circumstances.
He was accused on Twitter and elsewhere of being involved in claims of historic sex abuse at a children’s home in North Wales.
A witness in the case later explained that they had mistaken him for someone else. But not before various malicious elements, including Sally Bercow, the wife of the Commons Speaker, had plunged him into a Kafka-esque nightmare by bandying his name around on Twitter.
Despite ill-health, McAlpine came out fighting, vehemently denying the claims and successfully suing his detractors.
He died a year later — an appalling tragedy.
Of course, no two cases are ever the same. But what all three men have in common is this: they were victims of the new feminist ‘there’s no smoke without fire’ style of justice.
Read more »
Posted by Angelo Agathangelou at 11:58 pm No comments: Links to this post

Paedophile Teaching Assistant, 30, Escapes Jail After She Admitted Having Sex With A Student ...Because 'Vagina'

By Kieran Corcoran: A shamed teaching assistant has escaped jail despite confessing to having sex with a teenage student. 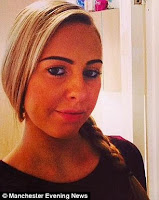 Caroline Berriman, 30, admitted that she had penetrative sex and oral sex with the little boy while she was teaching at Abraham Moss Community School in Manchester.
Appearing at Manchester Crown Court this week, she was handed a two-year suspended prison sentence after pleading guilty to three child sex charges.
Berriman had been charged with two counts of sexual activity with a child, and a third sexual activity charges specifying she was in a position of trust.
The victim cannot be named for legal reasons.
As well as the suspended prison sentence, she was fined £100, must complete 250 community work and was hit with a restraining order stopping her from seeing the boy.
Her victim, who has since left the school, was not in court when Berriman was sentenced.
Read more »
Posted by Angelo Agathangelou at 9:42 pm No comments: Links to this post

Originally designed to protect, the feminator's version of equality could end civilization as we know it. Will all men be slaughtered, or simply become slaves? Evan Delshaw
Posted by Angelo Agathangelou at 12:50 pm No comments: Links to this post

MGTOW Vs The Manosphere

"Women have been corrupted by a great evil known as feminism which is of course Marxist in origin, which is of course harming gender relations or will they find a third group of men who have looked where others have ignored or feared, men who looked as far back as the origins of our species, deep into our DNA so to speak and how we humans respond to external environments based on internal drivers?" CS MGTOW.

Jenny Tonge, who was forced to resign from Lib Dem post in 2012 for anti-Israel comments, says she has been ‘favorably impressed’ by Hamas

Via Times of Israel: British Baroness Jenny Tonge has said she is considering joining the Labour Party following the election of Jeremy Corbyn as party leader.
Tongue was forced to resign from her parliamentary post as Liberal Democratic whip in 2012 after making controversial statements against Israel.
Corbyn, a far-left fringe politician who won the top Labour post by a landslide, is widely regarded as one of the British lawmakers most hostile to Israel. In the past he has referred to Hamas and Hezbollah as “friends.”
Tonge told the BBC she was weighing joining the House of Lords under his leadership.
“I have met Hamas leaders both in Damascus and in Gaza. So has Jeremy Corbyn,” she said. “We were all favorably impressed by those people. We all feel it was very very important to listen to their point of view.
“They said a lot of wise things,” she added.
Tonge resigned as party whip of the Liberal Democrats in early 2012 after saying that Israel would not survive for long in its present form.
Tonge’s remarks, made at a meeting at Middlesex University, included the observation that the American people would soon “get sick” of the billions their government sends annually “to support what I call America’s aircraft carrier in the Middle East - that is Israel.”
Read more »
Posted by Angelo Agathangelou at 6:43 am No comments: Links to this post

By Mike Buchanan (J4MB): In mid July we wrote to a small number of senior Jewish and Muslim clerics, as well as a number of Jewish and Muslim organizations, concerning our position on male circumcision. Our blog post on the matter is here. We didn’t get any responses from Muslim clerics or organizations, and the only response we got from Jewish clerics and organizations was one from Milah UK, the body promoting circumcision for male Jewish infants in the UK. Their letter is here.

Traditional Jewish circumcision is known as Brit milah. An increasingly popular alternative does not involve genital cutting – Brit shalom (a naming ceremony).
Milah UK referred to two sources to justify the continuation of male circumcision – Genesis 17:10-14, and Leviticus 12:3. Genesis and Leviticus are two of the books in the Torah, the central reference of the religious Judaic tradition. There is much in these books – as in most holy books – which we would today find repellent, such as putting to death homosexuals, adulterers etc.
The ‘pick and mix’ approach which advocates the continuation of male circumcision, but not other elements in these books, is indefensible. The approach places male humans as sub-human. Anyone who circumcised male animals would surely find the criminal justice system falling on them like a ton of bricks – and quite right, too. Male cats and dogs have more rights than male humans when it comes to circumcision.

Max Keiser and Stacy Herbert discuss the role of #PigGate on national and economic security. They also look at the war machine and the Norman Bates-like fight Janet Yellen is having with the markets. In the second half, Max interviews Mark McGowan - aka the Artist Taxi Driver - about David Cameron’s relationship with pigs - both those at the trough and those on the platter.