Free Speech Can’t Just Apply To Those You Agree With

By mom4dads:  Freedom of speech, a constitutional right many in the world have fought for and died for. Censorship rhymes with totalitarianism. I think we need to keep fighting for it and the fight starts from how we educate our children. We need to stop infantilising them. It doesn’t “matter” if they fall. They will fall. We need to make it so that they are able to get themselves back up.
“For anyone who believes in free speech, or for that matter education, this emergent backlash against trigger warnings is to be welcomed. However, over the past couple of weeks, New York University investigated a student’s anti-racist art installation for racism, and women’s studies students at North Carolina State University were told they will be marked down if they use sexist words like ‘mankind’ in their essays. In the UK, the academic year has barely started and already Manchester students attending a fancy-dress club night have been banned from wearing bindis and feather headdresses.

GlobalFaction
Posted by Angelo Agathangelou at 6:29 pm No comments:

By August Løvenskiolds: The era of chivalry, of men protecting all women just because they are women, is coming to a close. In the time of growing gender equality women are no longer the loving partners of men, they are our competitors. One core principle of competition is that you don’t give aid to your competitors unless you are forced to.

One barrier to gender equality is the strong instinct in men to protect the women around us even if it puts men’s own lives in peril, and the strong instinct in women to seek a man’s protection at the risk of the man’s life. The human practices that come from these sexist instincts must come to a halt if we are serious about working towards gender equality in society.
Put simply, women who need men’s protection are not, and never will be, worthy of equality with men. This weakness, left unaddressed, will always make women seem inferior and infantile no matter how much we try to pretend as if it doesn’t.

Read more »
Posted by Angelo Agathangelou at 2:00 pm No comments:

"The democratic right to choose the next slave master, these are tools to make the slaves work faster."

Perseus999: Biko MC also known as Stephen Mutsaurwa Chisuvi from Zimbabwe, a poet, hip-hop artist and anarchist is waging a war with words on the status quo in Zimbabwe.

Read more »
Posted by Angelo Agathangelou at 11:55 am No comments: 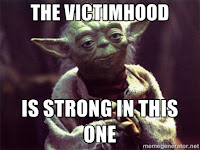 By David French: I grew up in rural Kentucky, where the process of becoming a man meant gaining toughness, shedding weakness, and learning how to take care of yourself and others. This was simply understood, not just by fathers and sons but also by mothers and teachers. In one grade-school incident, I got into a playground fight with another boy and knocked him to the ground. As the teacher rushed up to separate us, she demanded to know what happened. “He said I hit like a girl,” I told her. “Is this true?” She asked my friend. Rubbing his face, he nodded. “Well then, you deserved it,” she said. And that was that. I thought of that minor playground scrap — and many others like it — when reading through Bradley Campbell and Jason Manning’s brilliant new paper, “Microaggression and Moral Culture.” (The full article costs $30.00, but Jonathan Haidt has written an excellent summary on his website). Campbell and Manning contend that we’re in the midst of a key cultural change. Prior to the 18th and 19th centuries, we lived in an “honor culture,” “where people must earn honor and must therefore avenge insults on their own.” And while the honor culture tended to be somewhat violent — dueling is a classic response to an aggrieved sense of honor — it also carried with it an inherent limitation: Because personal insults required a personal response, people were more likely to count the cost of confrontation. As western civilization built an elaborate rule of law, “dignity culture” replaced honor culture.

Read more »
Posted by Angelo Agathangelou at 9:13 am No comments:

By Michael Krieger: You know things are bad in Saudi Arabia when one of its princes, and son of the state’s founder, is openly calling for a coup to displace the current King. This isn’t just some ambitious power play either, Saudi Arabia is an unmitigated disaster.

I’ve repeatedly pointed this out, and also predicted regime change on several occasions:


I believe that the recent drop in oil prices puts the current leadership in Saudi Arabia under a significantly higher threat of “regime change” over the next several years. In fact, I’d be surprised if the current status quo continues beyond 2020. While many have noted that the Gulf states are in a good position to ride out the recent price collapse due to massive FX reserves, these reserves can go much faster than expected. Particularly when you need to consistently bribe your own citizenry and build enormous walls on your northern and southern borders.

It appears this rebel prince can see the writing on the wall, and is wisely trying to diffuse the situation before they are all removed unceremoniously by non-royals.

Young Women Are Getting The Message

By Janet Bloomfield (aka JudgyBitch): I was really pleased the Marie Claire article about women who support the MHRM addressed what our ultimate goals are:

I finally located a physical copy of the magazine, and isn’t this interesting? They used a mashup of a badger, and feminist icon Wonder Woman to illustrate the article! 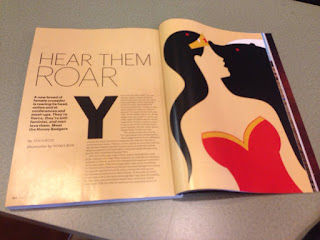 That makes quite a statement, if you ask me. Comparing the work the work women do to change the cultural narrative to include men and boys as human beings, not violent, privileged oppressors, to Wonder Woman! Hard to read that as anything but supportive, despite some of the failings of Jen Oritz. I wonder if she threw in just enough snark to avoid the feminist bitch pack? Didn’t work – Amanda Marcotte attacked her anyways.
Today I am pleased to introduce you to Yasmine Grey, who has published an article about feminism, men and boys at www.teengazette.com.

Read more »
Posted by Angelo Agathangelou at 4:21 am No comments:

The Dissident Dad: Maybe it’s just me, but all this back-to-school talk is a little awkward ever since we decided to homeschool our children.
With one of our children old enough to officially start kindergarten this year, I have recognized that the awkwardness emanates from my own insecurities. I feel like I’m weird, or that other people will assume my children will have a disadvantage in life. There’s this perception that I’m denying them social interaction, which I am definitely not.

For example, my wife recently joined a few homeschool groups in our area. In the past 3 weeks alone they have gone on field trips, met for swimming lessons, participated in group learning, and enjoyed play time.
I remember going to one field trip a year when I went to public school. My son, who is in kindergarten, has already been to three. He saw how donuts were made at Krispy Kreme, how vehicles are assembled at a Toyota plant, and he went to a real bee farm followed up with a trip to the local honey manufacturer. By the way, what a disgusting thing it is to learn that sweet yummy honey is bee puke.
I’ve personally had the opportunity to meet a lot of homeschoolers; kids ranging from 5 to 15, at parent meet-ups. Nothing is weird about the kids at all, but for an anarchist-libertarian father, one thing did stick out about the parents. No matter what their life philosophy is, political beliefs, or religion, all of the parents I have met to date have a single common denominator: a rejection of the status quo.

Read more »
Posted by Angelo Agathangelou at 1:52 am No comments: