U.S Gives Up Against ISIS, Makes You The New Enemy

Luke Rudkowski breaks down the latest news with ISIS and the US DOJ announcement it will go after anti government groups instead of ISIS. Just to clarify it's not only us standing up against this propaganda, but a wide range of amazing independent journalists.

Fraud Futures From The Past

Max Keiser and Stacy Herbert discuss the Keiser theory of quantum financial fraud: an odd world, formed by a fabric of toxic derivatives, where wealth does not take form until it has been stolen from a pension fund via particles of sub-debt existing in hundreds of tranches of CDOs simultaneously. In the second half, Max and Stacy interview Joel Benjamin of Debt Resistance UK about the role of housing speculation, and the consequent exploding mortgage debts, in destabilizing the economy.
Posted by Angelo Agathangelou at 10:06 pm No comments: Links to this post

Having Murdered Honey Bees And Monarch Butterflies, Monsanto Is Now After Women 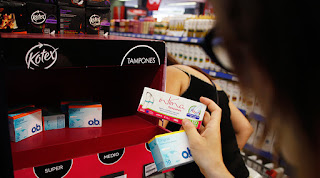 RT: The vast majority ‒ 85 percent ‒ of tampons, cotton and sanitary products tested in a new Argentinian study contained glyphosate, the key ingredient in Monsanto's Roundup herbicide, ruled a likely carcinogen by the World Health Organization.
Meanwhile, 62 percent of the samples tested positive for AMPA, glyphosate's metabolite, according to the study, which was conducted by researchers at the Socio-Environmental Interaction Space (EMISA) of the University of La Plata in Argentina.

All of the raw and sterile cotton gauze analyzed in the study showed evidence of glyphosate, said Dr. Damian Marino, the study's head researcher.

“Eighty-five percent of all samples tested positive for glyphosate and 62 percent for AMPA, which is the environmental metabolite, but in the case of cotton and sterile cotton gauze the figure was 100 percent,” Marino told Télam news agency. An English translation of the Télam report can be found here. The products tested were acquired at local stores in Argentina. 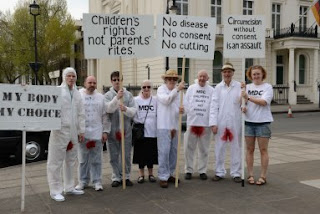 By Mike Buchanan: Three weeks ago J4MB supporters travelled to the Conservative party conference in Manchester, and over two days we supported the anti-MGM organization Men Do Complain (MDC). We handed out 2,000 leaflets – the design is here – and we engaged in a huge number of cordial discussions, many with circumcised men, including Jews and Muslims. A short video of our work is here, the first image above was taken on the second day.
We’ll be supporting MDC again on International Men’s Day, in Parliament Square, London, on 19 November (provisionally, from 12:00 – 16:00). I plan to be among those wearing white attire with red marks, similar to the attire worn by MDC supporters at a protest in Belgrave Square, the second of the images above.

Why I Don't Concern Myself With Moral High Ground

Raging Golden Eagle: Simple enough, I just explain why I don't concern myself with the moral high ground. Everyone side likes to claim they are in the right, that they are the ones fighting for truth and justice. Everyone justifies and rationalizes their actions according to their subjective beliefs.

Read more »
Posted by Angelo Agathangelou at 4:46 pm No comments: Links to this post

By W. Bradford Wilcox: It’s been a rough two weeks for the family-structure denialists, those progressive academics (Philip Cohen, “How to Live in a World Where Marriage Is in Decline”), journalists (Katie Roiphe, “New York Times, Stop Moralizing About Single Mothers”), and pundits (Matthew Yglesias, “The ‘Decline’ of Marriage Isn’t a Problem”) who seek to minimize or deny the importance of marriage and family structure. That’s because three new pieces of scholarship — a journal, a report, and a study — were released this month that solidify the growing scientific consensus that marriage and family structure matter for children, families, and the nation as a whole. On October 14, Princeton University and Brookings released a new issue of The Future of Children, focused on marriage and child well-being. 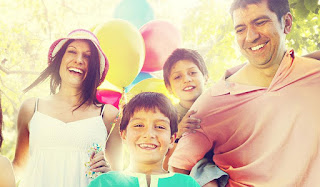 'Family change is having a major impact on our social environment and - in particular - our boys'
After reviewing family research over the last decade, the issue’s big takeaway, co-authored by Princeton sociologist Sara McLanahan and Brookings economist Isabel Sawhill, was this: Whereas most scholars now agree that children raised by two biological parents in a stable marriage do better than children in other family forms across a wide range of outcomes, there is less consensus about why. Is it the quality of parenting? Is it the availability of additional resources (time and money)? Or is it just that married parents have different attributes than those who aren’t married? Thus a major theme we address in this issue is why marriage matters for child wellbeing.

Read more »
Posted by Angelo Agathangelou at 10:39 am No comments: Links to this post

Is Russia At War With Islam?

What is Russia's goal with Iraq? Why are they telling the US to 'handle it'. What will Russia do with Libya - will they attack ISIS in Libya? How is western and Qatari media trying to spin Russia's involvement? What are the tasks of Iraq and Syria to regain the trust of some Sunni segments of their societies? 108morris108
Posted by Angelo Agathangelou at 4:12 am No comments: Links to this post