Angelo Agathangelou: Some years ago, whilst searching in an attempt to bridge the gap between my [what I thought was] high end audio system and my Apple computer I came across Lukasz Fikus, an interesting chap who was at the time building himself a reputation as an audio modder. His old site is a testament to his exploits as he took one or other generic unit and fettled it into submission as a hobby and before long as a service for a growing band of appreciative Audio geeks. In my case it was in connection to my old Marantz reference CD player that I lucked upon our resident audio genius. I have never looked back.

My first LampizatOr unit, an early level 4 DAC was the beginning of a journey that more or less turned me into the loony boyfriend of Meg Ryan in 'You've Got Male' and his love affair with a typewriter. Many happy hours of audio heaven followed along with a struggle to find the appropriate partner components to fully exploit that original masterpiece.

Read more »
Posted by Angelo Agathangelou at 11:52 pm No comments:
Email ThisBlogThis!Share to TwitterShare to FacebookShare to Pinterest

Feminist Amnesty International Isn’t Concerned About The Human Rights Of Men And Boys ...End Of Conversation

By Mike Buchanan J4MB: The deadline for pre-registering for the 2016 International Conference on Men’s Issues is 22:00 GMT on Sunday, 6 December – just four days away. You can pre-register here, to be sure of the opportunity to attend the conference (by later paying for a ticket, £225 – £265, less the pre-registration fee, before the end of December). It costs just £22.00 to pre-register, and you won’t be making a commitment to later buy a conference ticket.
If you need a compelling reason to attend the conference, this should be it. Amnesty International, the leading campaigning organization in the world for human rights, is concerned about the human rights of women and girls, but not the human rights of men and boys.
We’re still in the process of researching venues for the conference, and one venue that appeared perfect is the Human Rights Action Centre, run by Amnesty International. I sent an enquiry, asking for the booking terms, and received the following response:

Hi Mike,
Our Terms and Conditions are a part of the booking form.
Unfortunately, the Justice for Men and Boys’ message seems incompatible with our very public campaigns specifically for women’s human rights here.

Read more »
Posted by Angelo Agathangelou at 11:40 pm No comments:
Email ThisBlogThis!Share to TwitterShare to FacebookShare to Pinterest

By BBC: A decision to cast a man in the title role of Sleeping Beauty has been defended by the radical feminists at a Bristol theatre. 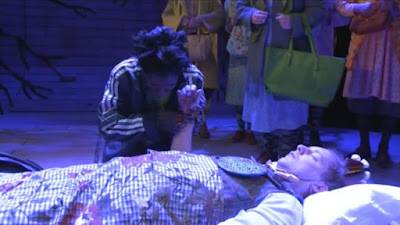 The panto, at the Bristol Old Vic, has replaced the unconscious princess with a prince called Percy and swapped the traditional kiss for CPR.
Despite being rewritten to appeal to a modern audience, the gender swap has caused controversy.
But producer Chloe Elwood said: "There's always been a tradition of playing with gender at Christmas."
The decision has caused some controversy in the national press, with Conservative MP Peter Bone telling The Sun newspaper it was "political correctness gone mad".
Written by the Grimm Brothers in 1812, Sleeping Beauty has traditionally seen an inert helpless princess, patiently waiting to be awakened from her slumber by a kiss from Prince Charming.

Read more »
Posted by Angelo Agathangelou at 9:47 pm No comments:
Email ThisBlogThis!Share to TwitterShare to FacebookShare to Pinterest

"Simply, when you talk about, these people don't even have jobs and the laziest and the losers, they're the ones having kids. Well, you're so busy getting your PhD in what? Er, you know cultural anthropology, we're going to go out and study and find out about cultures, because we're such an advanced culture. OK, but you have no foundation, your men don't like your women, your women don't like your men,

Read more »
Posted by Angelo Agathangelou at 11:15 am No comments:
Email ThisBlogThis!Share to TwitterShare to FacebookShare to Pinterest

The Freedoms That You Are Losing Now

Luke Rudkowski talks about the latest erosion of personal liberty all around the world and how this is done by the very few people who are creating the problem. We go over the latest protests in France, the U.S response to the Paris attacks and how this security theater is a way to shut everyone up.

Read more »
Posted by Angelo Agathangelou at 8:33 am No comments:
Email ThisBlogThis!Share to TwitterShare to FacebookShare to Pinterest

While Colorado receives the lion’s share of US national attention for its successful efforts at legalizing and regulating marijuana, the legal landscape is shifting toward more permissive laws nationwide.

By Kit O’Connell: (MINTPRESS): Keith Stroup, founder of the National Organization for the Reform of Marijuana Laws, or NORML, noted in an Oct. 30 article for Alternet that a majority of Americans support marijuana legalization. Quoting a recent Gallup poll, he reported:
“Among those poll respondents age 18 to 34, 71 percent endorse legalization. Among respondents age 35 to 49 years of age, 64 percent support legalizing marijuana. Among those age 65 and up, support fell to 35 percent, but this too reflected a sharp increase in support.”
f the 23 states which offer some form of access to medical marijuana, four states plus the District of Columbia have legalized cannabis for recreational use.
Earlier this month, medical marijuana sales kicked off in Illinois with the opening of the state’s first eight dispensaries. According to The Chicago Sun-Times, sales of medical marijuana reached $210,000 in the first week.

Read more »
Posted by Angelo Agathangelou at 5:21 am No comments:
Email ThisBlogThis!Share to TwitterShare to FacebookShare to Pinterest

"Quite allot of people don't know they're valuable. They'll instinctively run into a burning building just to save someone else, they'll work fifty years at a job they hate so someone else can stay warm and safe and they can be told their whole lives that they have privilege that makes them unworthy of compassion and they'll just take it and say alright, back to work for me and they'll go to their graves having never been valued for who they are as a person. You see I have to be subtle and subversive like this because if I come right out and say it you'll [feminists] call me a whiny man baby!" DoctorRandomercam

Read more »
Posted by Angelo Agathangelou at 2:20 am No comments:
Email ThisBlogThis!Share to TwitterShare to FacebookShare to Pinterest

"NABWALT, I'm talking about the Black women who are like that, 1. because I can. 2. Because my balls. 3 Because this is the voice of the everyday brother. 4. Because the fuckery of black women is destroying black America. ...As you can see the sisterhood is weeping hot bitter tears of hate and but hurt as a result, we are exorcising their demons!" Obsidian.