60 Years For A Suspended License? No!

"Suspended license, what's this nigger doing in my court room? 60 years, get this nigger out of here!" 6oodfella.
Posted by Angelo Agathangelou at 10:26 pm No comments: Links to this post

"44 Boys Is Too Many!" Little Girls Write Letters To Hillary Clinton - PARODY

In this heartwarming video, see what a few little girl supporters wanted to tell Hillary Clinton. Their inspiring words remind us there is still much to do to break the highest hardest glass ceiling for every girl out there. We, too, can be corrupt politicians.

Michaela Whitton (ANTIMEDIA): While people are focused on the atrocities carried out by Da’esh and/or their own governments in Syria and Iraq, it’s been nearly impossible to keep track of the number of Palestinians killed by Israel’s unwritten shoot-to-kill policy since October. 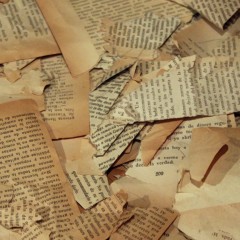 The full-fledged violence in the West Bank, East Jerusalem, and Gaza has persisted since September with violence from both sides and Israeli forces recklessly flouting international standards.
The most recent report by the Palestinian Centre for Human Rights (PCHR) reveals the names, ages, and circumstances of deaths of 100 Palestinian victims who were killed by the Israeli military between October and December.
According to PCHR, the majority were under 20 years of age and died as a result of several bullet wounds to the body. The oldest victim was 72 and the youngest, 3, and included a mother and her unborn child killed by an Israeli missile strike in Gaza. Some of the Palestinians had carried out violent attacks on Israelis, while the majority were shot while participating in demonstrations or for throwing stones.

'Israeli soldier dropping a knife on the ground before forcing a terrified Palestinian girl to pick it up'
Read more »
Posted by Angelo Agathangelou at 5:15 pm No comments: Links to this post

London School Of Economics - Everything But The Truth 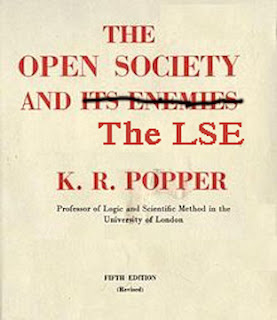 Report by Gilad Atzmon: The London School of Economics (LSE) shamelessly bowed to Jewish pressure mounted by the infamous ultra Zionist Board of Deputies Of British Jews (BOD) and removed an academic truth telling blog about Israel and Jewish culture.
The Jewish Chronicle reports today that the LSE has removed a post on its website  pointing at the most obvious and undeniable truth that  Zionism is based on Jewish biblical “notions of separateness, superiority and entitlement”.
Dr Sandra Nasr, a lecturer in the politics of the Middle East at Notre Dame University in Australia, wrote that Jewish notions of “otherness” as the “chosen people” and “colonial plan” to occupy Palestine have led to a deliberate “delegitimising” and “dehumanising” of Palestinians. Dr Nasr also wrote that  “Zionism, the ideological project to secure a Jewish homeland, relies upon notions of separateness, superiority and entitlement”.
The LSE said that its editorial guidelines had not been followed in publishing the blog. Let’s attempt to learn what are the academic ‘editorial guidelines’ in British academia 2015:

The Red Pill: The Movie About Men That Feminists Didn’t Want You To See

By Martin Daubney: A feminist filmmaker has re-ignited the gender war by daring to make a controversial movie about the Men Right’s Movement.
As part of her research for The Red Pill, American film maker Cassie Jaye spent hundreds of hours with the internet’s most notorious Men’s Rights Activists (MRAs) over a two-and-a-half year period. For balance, she also interviewed some of  their fiercest critics – such as Katherine Spillar, Executive Director of the Feminist Majority Foundation. 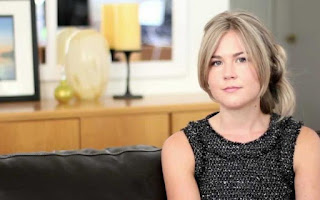 "The MRAs weren’t loners or misogynists. Most of them are in loving relationships and have children, and that was shocking for me"
Cassie Jaye

Jaye began the process as a feminist, but she ended up not only sympathising with the MRAs, but fundamentally questioning the “aggressive” ethos of modern feminism.
For her efforts, she says she has been smeared, threatened with “career suicide” and even saw her funding dry up – to the point where the movie was unlikely to see the light of day.
But then something incredible happened: via a Kickstarter fund, a “global army” of 2,732 free speech advocates (of both genders), raised a staggering $211,260, ensuring the movie’s cinematic release.

Max Keiser and Stacy Herbert discuss the flying toilet that is Wall Street where rather than have their bad debts stink up their home, bankers package the toxic garbage (or ‘sacks of bleep’ as Goldman Sachs called it) into derivatives which are hurled into the furthest, deepest pension and passive investment funds around the world. In the second half, Max continues his interview of journalist and author, Nick Kochan, about ISIS - the most well financed terrorist organisation ever. They look at the role of Turkey in the terrorist oil business before moving on to look at the banking fraud sector.
Posted by Angelo Agathangelou at 7:29 am No comments: Links to this post

The Pretend War: Why Bombing Isil Won't Solve The Problem 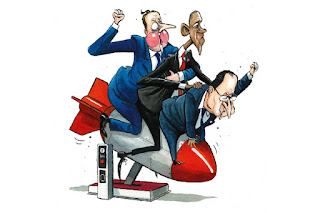 By Andrew J. Bacevich: Not so long ago, David Cameron declared that he was not some ‘naive neocon who thinks you can drop democracy out of an aeroplane at 40,000 feet’. Just a few weeks after making that speech, Cameron authorised UK forces to join in the bombing of Libya — where the outcome reaffirmed this essential lesson.

Soon Cameron will ask parliament to share his ‘firm conviction’ that bombing Raqqa, the Syrian headquarters of the Islamic State, has become ‘imperative’. At first glance, the case for doing so appears compelling. The atrocities in Paris certainly warrant a response. With François Hollande having declared his intention to ‘lead a war which will be pitiless’, other western nations can hardly sit on their hands; as with 9/11 and 7/7, the moment calls for solidarity. And since the RAF is already targeting Isis in Iraq, why not extend the operation to the other side of the elided border? What could be easier?
But it’s harder to establish what expanding the existing bombing campaign further will actually accomplish. Is Britain engaged in what deserves to be called a war, a term that implies politically purposeful military action? Or is the Cameron government — and the Hollande government as well — merely venting its anger, and thereby concealing the absence of clear-eyed political purpose?

Read more »
Posted by Angelo Agathangelou at 3:50 am No comments: Links to this post

Perseus999: The December Revolt inspired countless texts and poems. It seemed like all these thoughts and feelings that were asphyxiating inside our minds and bodies about what is wrong with this world, busted out into words and actions, from a written text to the mesmerizing sight of a flaming barricade that is an optical poem in itself.

Read more »
Posted by Angelo Agathangelou at 1:03 am No comments: Links to this post