The Central Government blinks.
By Don Quijones: When Catalonia’s regional government announced a road map to independence from Spain in November last year, Madrid’s response was to threaten to cut off the financial supply lines to the region. It was the equivalent of a declaration of economic war, riddled with risks, especially with an acutely cash-strapped Catalonia facing over €4.6 billion of bond redemptions in 2016. 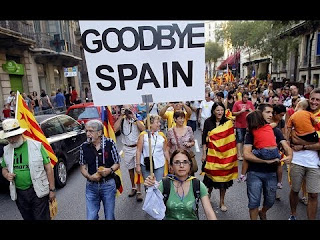 Madrid’s strategy was economic madness, as we warned at the time: Catalonia’s economy accounts for 20% of Spain’s GDP. And international investors would freak out if roughly one-fifth of Spain’s economy suddenly plunged into a deep recession or became ungovernable. Investors might question the ability of the Spanish government to service its over €1 trillion in debt.
Now, that scenario might be in the process of coming true.
The words “bankrupt” and “default” are being used with disconcerting frequency in relation to Catalonia. The words are even making their way into the headlines of national newspapers, as fears grow that the region could be on the verge of descending into a Greece-like debt spiral.
According to Regional President Carles Puigdemont earlier in March, Catalonia already missed payments on at least two bank loans.

Fitch just warned that Catalonia has grave liquidity problems that will require “proactive management of the debt” and “close collaboration with the central state,” which is about as likely as bullfighting getting banned across Spain.
Standard &Poor’s downgraded Catalan long-term debt to B+ and its short-term debt to B, with a negative outlook, thus pushing it deeper into junk (emphasis added):

In the next 12 months the political tensions between Spain’s central government and the regional government could escalate, adversely affecting the financial relations between both.
(I)n our opinion, Catalonia’s management of its short-term risks represents a much greater risk than we had previously thought and we have serious doubts about the region’s ability to cope with the short-term liquidity pressures it faces.
Our rating also reflects Catalonia’s weak budget management and high level of indebtedness. We believe that its liquidity levels are inadequate, due to its limited capacity to generate liquidity, which is compensated by the support of the central government…
In our base scenario, we estimate that Catalonia’s internal capacity to generate cash will cover only 40% of the liquidity needs it will have over the next 12 months…”

On the bright side, so to speak, S&P declined to downgrade Catalonia’s rating to “selective default,” on the grounds that the banks have agreed to extend the maturities of the debt (for now) and Catalonia has continued to service the interest due on that debt.

But is the damage already done?
On Wednesday, Catalan bonds swooned and yields soared as rumors spread over Catalonia’s ability to pay its debts. Some investors may be left with lingering doubts about the wisdom of pouring further funds into Catalan investments.
While none of the rating agencies have downgraded Spanish debt, it doesn’t exactly take a leap of imagination to realize that Catalonia’s liquidity problems could very quickly become Spain’s, especially with the central state directly funding over 60% of the region’s debt. It’s not as if Catalonia is the only region of Spain with serious funding issues. Two out of every three euros of new debt created last year went to the regions, which increased their total debt exposure by 10.3%. The worst offenders — Extremadura and Aragon — increased their respective debt piles by over 15%.
Most of the regions took advantage of the near zero-interest-rate autonomous liquidity fund (FLA, for its Spanish acronym) offered by Madrid’s central government to help cover their financing needs. In the case of Catalonia, the amount of debt it now owes the FLA (€72 billion) represents over 35% of its GDP, 3.5 times more than before the financial crisis, in 2008. But then the scandal-tarnished regional government of Valencia at last count owed the equivalent of 41.3% of its GDP.
The situation has grown so serious that it’s begun to draw the attention of EU institutions. Last week the European Commission broke its silence over the scale of both Spain’s external and internal debt, warning that a new round of austerity will be needed to reduce the economy’s public deficit to the target rate of 3%.
Then, two days later, in a perfect illustration of the absurd contradictions at the heart of Europe’s economic and monetary system, ECB Chairman Mario Draghi unleashed yet another round of extreme monetary measures aimed at making debt even cheaper for European banks, corporations and, yes, countries like Spain.
As the price of debt gets cheaper, it’s hard to resist taking on more. But even with historically low interest rates (gracie, Signor Draghi), the price of servicing the debt can get out of control. Between 2011 and 2015 Spain’s central government managed to spend a whopping €121 billion – the equivalent of 12% of annual GDP – on interest payments. And still, the debt mountain grows, particularly at the regional level.
If investors begin to worry about the sustainability of Catalan — and by extension, Spanish — debt, the cost of servicing the debt could explode. This dynamic gives Catalonia an invaluable bargaining chip in its negotiations with Madrid. Bloomberg, citing “two people familiar with the situation”:

Officials in the regional capital Barcelona are counting on Spain to step in and supply the funds they need to meet loan repayments coming due this year, betting the central government will be forced to back down because the costs of a default would be greater for the Spanish sovereign….

In other words, the more Catalonia struggles to pay, the more concessions it can expect to extract from Madrid — even if the money it receives is then used to pay for its push for independence from Madrid. It hopes to persuade Madrid to drop the interest rate on its FLA debt to 0%, to convert short-term debt into long-term debt and to refund a budget surplus from 2014. It’s a heck of a lot to ask, but perhaps it has less to lose than Madrid.
And it seems to be working: yesterday, after a meeting between Spain’s Treasury Minister Cristóbal Montoro and Catalonia’s Economic Counselor Oriol Junqueras, Catalonia received part of that budget surplus. In other words, for a brief moment, Madrid blinked.

Posted by Angelo Agathangelou at 2:29 am