Women Have Won The Fight For Equality. Now They Should Use Their Power To Help The Boys 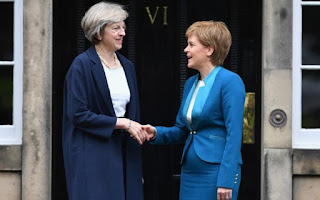 By Fraser Nelson: When Theresa May went to visit Nicola Sturgeon in Edinburgh, they posed for a photograph on the steps of Bute House, the official residence of Scotland’s First Minister. It was one for Mrs Stugeon’s album and she published it on her Twitter account a few hours later.
Politics aside, she said, this picture – of two women running their respective governments – should show girls everywhere that no ambition should be off-limits for them. Her comment was gracious, warm-hearted – and about 25 years out of date.
There’s nothing wrong with young, female ambition in Scotland. Scottish girls are now 43 per cent more likely to be accepted to universities than boys, a figure that would have caused panic if things were the other way around.
When Ms Sturgeon and I were at Glasgow University (having been inspired in different ways by another female Prime Minister) it was the golden age of campus gender equality. But it didn’t last long. Boys have been falling behind ever since and now, Scottish universities have one of the worst gender imbalances in Europe. Yet no one, it seems, really cares.
As so often, Scotland serves an early warning for England. Years of being indifferent to the problem facing young men has led the same problem.
This year, girls are 30 per cent more likely than boys to win a university place – a figure that is being celebrated because it’s down on last year’s 31 per cent. The gap is narrowing, but this is not progress worthy of the name.
This trend is at its most pernicious at the bottom end of the income scale, and worse still when you strip out ambitious immigrants and their children. Poor white children always fare worse under the state school system, but poor white boys do worst of all. It’s the inequality that dare not speak its name.

Fighting discrimination can be tough, if the cause is new and unfashionable. Even identifying prejudice can be hard, as history attests.
Many of those who devoted their lives to fighting for liberty can be blind to injustices that seem obvious in retrospect. Most of America’s founding fathers, who declared all men to be created equal, were slave owners.
The young Winston Churchill said that the colonial wars represented a battle of “the Aryan stock” against “barbaric" people. This is not to say that these men were bigots, just creatures of their time. As we are now.
It’s hard for anyone, in any age, to guess which of the commonplace views of their time will be regarded by subsequent generations as monstrous bigotry. In our case it could be meat eating, our tolerance of mass abortion, even the way we talk about gender. Or it could be our indifference to the plight of young men, and our stubborn refusal to recognise that the cause of feminism is becoming detached from the notion of equality.
For those born before 1975, there is still an indefensible pay gap. But for the under-40s, a power shift has taken place. Far more boys are growing up seeing very few men in positions of authority. About one in five children have no father in the home and there are precious few male role models in primary school: six in every seven classes there are taught by women.


Mary Curnock Cook, the head of Ucas, has worried aloud about all of this: surely, she says, such a huge gender imbalance at school will lead to gender imbalance later on? On current trends, she says, girls born today will be 75 per cent more likely to go university than boys.
Not that anyone has been terribly interested in her warnings. The Department for Education recently states, almost with pride, that it doesn’t fund any research looking at male underachievement; it is “gender-blind”.
Yet the Government's own research shows the graduate earnings premium is significantly higher for women than men; that men are not just less likely to apply to university but less likely to graduate and (if they do) to end up with worse grades; that if you’re a white boy poor enough to qualify for free school meals, you’re likely to do worse in school (and, ergo, at work) than almost anyone else.
Over the years, ministers have tended to focus on the attainment of ethnic minorities, with great success. Children whose heritage is Chinese, Indian, Irish, Bangladeshi, African – all get better exam results, on average, than the white British. Remarkably, a student from any ethnic minority is more likely to get into university than a white student.
It’s a great proof of what Michael Howard called the “British dream”: in spite of all we hear to the contrary, this is a pretty good country in which to be young, gifted and black. The concerted efforts of teachers and policymakers have paid off.
Paul Collier, an Oxford economics professor, has argued that this now carries a danger as schools who seek to ascend the league tables could be tempted to take (for example) famously bright East Asians.
It’s logical, he says, for universities and schools to seek out the brightest demographic group, and a natural response to a vacuum in government policy – a vacuum he attributes to the taboo on public discussion. If no one will discuss the problems facing white boys, then we can’t expect any answers.
And this is the heart of the problem. Who would wade into a debate about whether white working class culture disparages education? Ethnicity is easy to identify, and far safer terrain for MPs. The problems with poor white boys are more complicated, and strewn with political landmines.
Jo Johnson, the universities minister, has become the first to raise male academic failure as an issue. But there’s not much he can do: the problem lies at school, not university. And in an era where even male Cabinet ministers feel obliged to wear T-shirts saying “This is what a feminist looks like,” it’s a brave man who says that real problem is the boys.
So perhaps what we need is a brave woman. It’s easy to deplore discrimination now, but far harder to have fought sexism in the 1950s, racism in the 1960s and homophobia in the 1970s.
It is Mrs May’s style to to take a small number of causes, fashionable or not, and pursue them relentlessly. If she were to take up the cause of our boys, there would be a great many working class families who would have a lasting reason to vote Conservative.

Posted by Angelo Agathangelou at 9:40 am