Here’s What Cambridge Students Think Of Their Sexual Consent Classes

Women’s officer posts picture of empty hall as freshers boycott ‘patronising’ talks
Via Jeff, J4MB: Some good news. As we’ve also seen at York University recently, students are starting to tell the feminist control freaks among them to go to hell. About damned time. An extract: 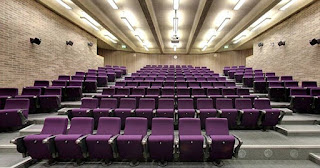 Last night Sir Anthony Seldon, the vice-chancellor of the University of Buckingham, said he was heartened by the student boycott. ‘Universities are about the teaching of independent mindedness, and students should not be going along with what the NUS or anyone else is telling them,’ he said.

By Jonathan Petre: They are the university workshops designed to inform new students about sexual consent in an effort to tackle the rising number of assaults on campus.
But in a sign of a growing backlash against such events, not a single fresher attended an hour-long session at a top Cambridge college.

The angry women’s officer at Clare College later posted pictures of the empty auditorium on social media and lambasting freshers for snubbing the event. She described the move as a ‘huge step backwards’.
In a post to accompany the picture of the empty venue, she complained: ‘This is the number of Clare College freshers who thought it worth their time to show up to the consent workshops this morning, who thought that an hour out of their morning in Freshers’ Week was too much to ask.’

The post was later deleted.
Earlier this month, students at York University staged a walkout in protest against consent classes.

Posted by Angelo Agathangelou at 1:16 pm