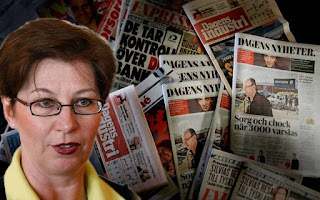 By Zionist Report: To clarify, this Swedish MP didn’t resign on her own will. In fact, she was forced to leave by the Zionist “Mattias Karlsson,” who has more influence on the Sweden Democrats than the leader Jimmie Åkesson. Mattias Karlsson has worked with the radical-left intelligence service financed by George Soros called ‘EXPO’ to locate Nationalistic people in the party — so they can be kicked out. In sum, the Sweden Democrats is a infiltrated useless party today that works in the interests of Israel.
To understand the extent of Jewish control of media and power in Sweden read the following article: “The Chosen People” In The Swedish Media.

Source: newobserveronline.com
Swedish Democrat party member of Parliament Anna Hagwall has announced her resignation from all party posts and will not stand for reelection in 2018 after a furor following her exposure of the fact that a single family of Jews control the Swedish media.
The uproar followed her letter to the Aftonbladet newspaper in which she said that “ethnicity should be a factor” in determining media ownership of more than 5 percent—an obvious reference to the Jewish Bonnier family media group.
The Bonnier Group owns 96 book publishers, 42 business and trade press newspapers, 105 digital news platforms, 9 film production companies, 176 magazines, 23 major newspapers, 33 TV stations, and 33 “other” media outlets—and quite literally dominates the controlled media in Sweden.
Hagwall had earlier submitted a motion to the Swedish parliament which proposed cuts to the state subsidies paid to media in Sweden.
Although she never mentioned Jews by name, Hagwall said in an explanatory letter to the Aftonbladet that it would be a good idea to “let Bonnier’s newspapers go under” so that “no family, ethnic group, or company” could control more than 5 percent of the media.
“An entire 80 percent of the media is owned and controlled by the same owners,” Hagwell wrote. “This is not acceptable. Therefore, media ownership should be spread over many independent companies and people. In order to change this, I suggest backtracked press subsidies [for the independent media].”
When asked by Aftonbladet how the abolition of press subsidies to the country’s local newspapers reduce Bonnier’s power over the media in Sweden, Hagwall answered by email that “most small newspapers are directly or indirectly controlled by Bonnier, and why they have to be subsidized by the Swedish taxpayer is a mystery.
“Let the little Bonnier newspapers in the provinces go under, because then a void will be created which can be filled by newspapers that care about people and business owners.”
She also said that the Swedish public service broadcaster, Sveriges Television (SVT), should be switched to pay channels to “reduce SVT’s propagation of the politically correct agenda.”
The comments provoked a stream of attacks upon Hagwall, and the Swedish Democrat leadership also distanced itself from her, saying in a statement that the matter will “affect her future in the party.”
This week, Hagwall resigned her position as a member of the Parliamentary Committee on Taxation and internal group leader of the Sweden Democrats’ tax policy group. She also will not seek reelection to Parliament in 2018 at the request of the party leadership, and it is currently unclear if she will continue to sit in parliament for the remainder of the current term. 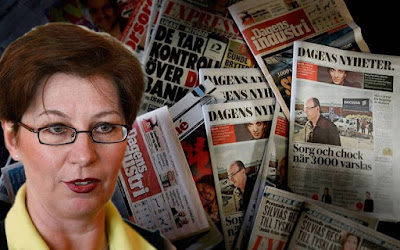 Posted by Angelo Agathangelou at 1:52 am