‘The Mud Will Stick’

By Tim Sculthorpe: Sir Cliff Richard today made an emotional plea to MPs and peers to change the law and ensure people accused of sex crimes remain anonymous until charge. 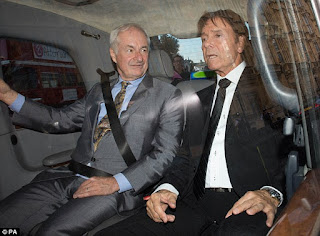 The singer said he had been 'tainted' by false claims made against him in 2014 and warned 'the mud will stick' despite being exonerated.
Sir Cliff made pleaded with politicians at a private meeting in the House of Lords today alongside broadcaster Paul Gambaccini, who also faced unfounded claims.
He renewed his attack on the BBC for broadcasting pictures of a raid on his home in 2014 after they were tipped off by South Yorkshire Police - claiming the 'TV circus' ended his hopes of returning to a normal life.


Sir Cliff said being named by the police meant 'gross intrusions into my private life were treated as a form of entertainment'.
He told the private meeting: 'Only we who are innocent of any crime but who are named publicly before any charge has been brought, before even being arrested or interviewed by police, will know the damage caused to our dignity, our standing, and our self esteem.
'My name was traduced around the world in all the places where people know me.
'I believe there were probably very few countries that did not hear of the ridiculous, appalling accusation made against me.'
As he appealed for a change in the law, Sir Cliff said: 'I sincerely hope that I can play a part in ensuring that no-one else has to suffer in the same way I have.'
Sir Cliff said he had lived as 'honourable and honest life as I can' but said he feared he would now 'forever be tainted' by the accusations.
Sir Cliff's statement emerged on Twitter shortly after he left the Palace of Westminster after the 90-minute meeting.

Former police officer and Liberal Democrat peer Brian Paddick is pushing for the change in the law in Parliament.
Lady Brittan, the widow of Tory MP Leon Brittan who was investigated as part of a doomed Scotland Yard inquiry into claims of a Westminster paedophile ring, was also due to speak at the private meeting at the House of Lords this afternoon.
In March she was told that her late husband would have had no case to answer over the claims, and received an apology for the force's failure to tell Lord Brittan before he died that he would face no further action over a separate claim.
Lord Paddick said: 'Particularly in the wake of the Jimmy Savile revelations, most people are very well aware of the impact historical child abuse has had on the survivors of such offences, but the meeting is to give parliamentarians the opportunity to hear from those who have been affected by being falsely accused of such offences.
'No matter who they are - whether they are a local school teacher whose arrest makes it into the local newspaper, or whether it's somebody like Cliff Richard, who has never been arrested but the allegations against him were all over the BBC and the national media, clearly it can have a devastating effect both on the individual's reputation and potentially on their careers.


'The higher the public profile the more devastating the impact can be because of the weight of publicity that is given to it.'
Sir Cliff was the subject of a long-running South Yorkshire Police investigation, which centred on accusations dating between 1958 and 1983 made by four men.
A police raid on his Berkshire home was televised and he is suing the BBC and South Yorkshire Police over the live coverage of the swoop.
He was never arrested, and earlier this year prosecutors announced that no charges were to be brought as a result of the inquiry. Last month a review confirmed that the decision was correct.
Gambaccini was kept on police bail for 12 months after being arrested on suspicion of historical sex offences in 2013, before being told he would not be charged.
He described the Operation Yewtree investigation against him as a 'witch-hunt' that ate away at the idea of 'innocent until proven guilty'.
The proposal to amend the Policing and Crime Bill would make it illegal for anyone to publicly name someone arrested on suspicion of a sex crime, unless they were charged.
Ahead of the meeting the End Violence Against Women Coalition wrote an open letter to Sir Cliff, Gambaccini and Nigel Evans, the former Commons deputy speaker who was cleared by a jury of sex offence allegations in 2014, urging them to abandon the campaign.
Co-directors of the campaign, Sarah Green and Rachel Krys, said: 'We want more discussion of rape and justice, not less.
'We want more openness and ever better practice by police and the courts in rape cases. We want the media to change the way it reports on rape.
'We desperately need a huge increase in provision of specialist counselling and support services for survivors of sexual abuse.

'And in the long term, we don't want anonymity for defendants because we don't want it for those who allege rape either - because one day we will have eradicated the shame of being raped, and made this offence one which can be openly tested in court like all others.'

Lord Paddick maintains that more survivors are encouraged to come forward after a suspect has been charged and appeared in court, rather than on arrest.
The idea of a ban has been supported by current Metropolitan Police Commissioner Sir Bernard Hogan-Howe, who is Britain's most senior police officer.
Former chief constable of British Transport Police Andy Trotter is backing the amendment, and will also speak at the meeting on Monday.

Posted by Angelo Agathangelou at 6:21 pm