Lies Are The Enemy Of The Truth

"Don't say anything ridiculous, because Sargon will have to ban you from his channel. What? Isn't Sargon one of the bigger channels who is an advocate of free speech, like isn't that one of the things he built his empire, such as it is, upon, the rejection of the no platforming of people, the rejection of censorship? He doesn't want to but he'll have too." johntheother.

A philosophical account of hatred and loose guidance on how to overcome it. Groundwork For The Metaphysics of MGTOW
Posted by Angelo Agathangelou at 8:30 pm No comments:

Professor Fiamengo discusses the significance, and the importance, of the Female White Knight.

Read more »
Posted by Angelo Agathangelou at 3:08 pm No comments:

The Northern Echo: A MAN has been ordered to give police 24 hours' notice if he wants to have sex with a woman.
He is also subject to controls on his use of the internet and must tell the police about every phone and device that he has that he could use for accessing the internet or calling or texting people.

The restrictions are part of an interim sexual risk order and will continue until May 19, when York magistrates will decide whether to make a full order and if so, for how long.
Under the interim order, if the man, who cannot be named for legal reasons, plans to start a sexual relationship of any kind with a woman or to have one-off sexual activity with any woman, he has to contact North Yorkshire Police (or if he moves to a different county, the local force) and tell them who the woman is. He must do this at least 24 hours before any sexual act occurs.
Full sexual risk orders last for a minimum of two years and breaching an order can lead to a prison sentence of up to five years. They are used when someone has not been convicted of a sexual offence, but the police convince a court it is necessary for one to be made against the person to protect the public from him or her.

Read more »
Posted by Angelo Agathangelou at 11:04 am No comments:

Hundreds of millions of people throughout the Western world are being forced to admit an obvious, yet uncomfortable reality.

Democracy is dead. Your vote and
your voice doesn’t matter. Not at all. 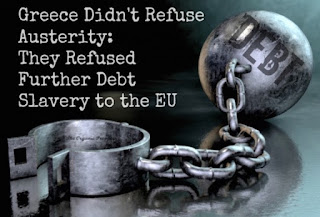 No group of people understand this as intimately as the Greeks. They voted for one thing, got something else, and in the process were unceremoniously reminded of their political irrelevance.
– From the post: Greeks Flock to Grassroots Alternative Currencies in Affront to Euro Debt Slavery
Just in case you still had any doubts as relates to how slimy, nefarious and undemocratic the EU is, check out the following from Ekathimerini:
Yanis Varoufakis was instructed last year by Prime Minister Alexis Tsipras to put together a small team of people to draw up a plan for introducing a parallel currency if Greece was unable to reach an agreement with its lenders on a new bailout, the ex-finance minister said in a TV interview late Tuesday.

Read more »
Posted by Angelo Agathangelou at 7:39 am No comments: 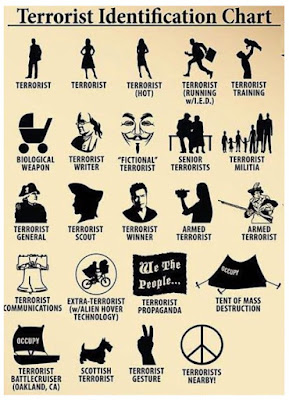 By Michael Krieger: The UK is at it again. Proving that no other people are capable of coming up with more mindless responses to the exaggerated threat of terrorism than the British.
The latest spectacle revolves around the completely idiotic website just launched by Education Secretary Nicky Morgan, titled “educate against hate.” In reality, the only people who need educating are the clowns who put this this monstrosity together and thought it was a good idea.
First a little background from the BBC [aka British Brainwashing Cunts]:
The website holds information for schools and parents to tackle the “spell of twisted ideologies”.
The government promises a “tougher approach” to preventing illegal, unregistered schools.
Mrs Morgan says the aim is to protect “impressionable minds from radical views”.

Read more »
Posted by Angelo Agathangelou at 6:36 am No comments:

Eliyahu Ungar-Sargon: ‘Cut: Slicing Through The Myths Of Circumcision’

Independent filmmaker Eliyahu Ungar-Sargon discusses the experiences that informed his film, Cut: Slicing Through the Myths of Circumcision.
Posted by Angelo Agathangelou at 5:28 am No comments: