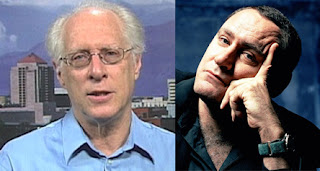 By Gilad Atzmon: I have known Rich Forer for a few years, we have met several times and shared a platform more than once. Rich is the author of Breakthrough: Transforming Fear Into Compassion - A New Perspective on the Israel-Palestine Conflict?  Rich’s opposition to Zionism is universal and humanist in nature.
Recently, an interview with Rich was published by the Jewish Pro-Palestinian outlet, Mondoweiss.  I was impressed with many of Rich’s statements but thought that some of his ideas should be challenged. I believe that those who are interested in criticism of ID politics, Jewish culture and power may find this dialogue enlightening.

***
Gilad Atzmon:  I’d like to congratulate you for your recent interview with Katie Miranda [below]. I have no doubt that your heart is in the right place and I welcome your criticism of Jewish Identity. But I also have some fundamental doubts about your thesis.
In the interview with Miranda you present a binary opposition between the ‘human’ and the ‘Jew.’

Read more »
Posted by Angelo Agathangelou at 11:46 pm No comments: Links to this post

Brexit Meltdown At The Bank Of England + Monsanto Losing Its Grip?

But it’s supposed to be “independent”
from national politics.
By Don Quijones: Project Fear — the massive PR campaign aimed at sowing and watering the seeds of dread about the potential consequences of a YES vote in the upcoming referendum on a British exit from the EU — is in full bloom. In the event of a wrong answer, all manner of biblical disasters can be expected to befall the nation, the British public is constantly being warned.
The country’s national income will shrink, hundreds of thousands if not millions of jobs will vanish, the City of London’s core industry — financial engineering — will migrate across the channel, the currency will collapse, house prices will plummet, European firms will stop selling products to Brits, the U.S. government will impose massive tariffs on British imports, and even Britain’s already dismal climate will get worse.
Project Fear’s shrillest shills include the British government and institutions of State, the UK’s most powerful business lobby group The Confederation of British Industry, the City of London Corporation (and all the too-big-to-fail financial institutions whose interests it faithfully serves), the European Union, the International Monetary Fund, and the world’s biggest fund manager BlackRock.
Read more »
Posted by Angelo Agathangelou at 10:32 pm No comments: Links to this post 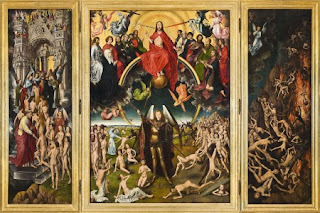 By Author Douglas Galbi: In France about 1372, the knight Geoffrey de la Tour Landry wrote a book to instruct his young daughters “how to govern themselves, and to keep themselves from evil.” To get material for his book, Geoffrey had two priests and two clerics read to him “the Bible, stories of kings, chronicles of France and England, and many other strange histories.”[1] Those readings probably included a popular, realistic story of a hermit’s vision of judgment and punishment.
The context of the hermit’s vision is a knight and his deceased wife. The knight loved his wife greatly. They were married only a short time before she died. The knight sought comfort from his uncle, a hermit. The knight wanted to know whether his wife was damned or saved. His uncle the hermit went into his chapel, prayed for a long time, and fell asleep. Then the hermit had a vision:
he saw the wife’s soul before Saint Michael the Archangel, with the Fiend on the other side. She was standing in a balance, her good deeds beside her. On the other side of the scale was the devil with all her evil deeds

Read more »
Posted by Angelo Agathangelou at 8:50 pm No comments: Links to this post

MGTOW - Creating A League Of Your Own

By Deidre: As a woman who lives in a strong feminist culture, I’ve been intrigued by the movement, ‘MGTOW.’
What does MGTOW really stand for, and how might ‘men going their own way,’ impact the world around them? Well, first, most movements have a central mission statement, if you will…something that sets the movement apart from other movements, congruent thoughts coming together and finding acceptance as part of a group, if you will. MGTOW is unique because it tells men that they no longer need to compromise their values to please the feminist agendas, and can finally feel that pursuing their own quest in life won’t label them selfish assholes. The irony with feminism is that it instructs women to ‘go their own way,’ but get their men to follow their ways, too. 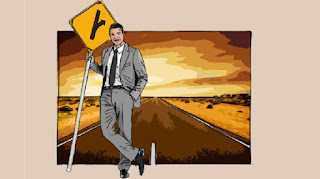 Not all feminists, but many (most?) find satisfaction in controlling men, they think that is a victory for humankind, and sadly, that has become its mission statement of sorts. Because for many (most?) feminists, they believe that feminism was necessary to enlighten everyone to the oppressive, Patriarchal regime that had been in place, throughout history.
Perception is everything, as they say.

Read more »
Posted by Angelo Agathangelou at 6:34 pm No comments: Links to this post

Submitted by Tyler Durden: To be sure, there are always going to be financial and geopolitical landmines and every once in awhile we - and by “we” we’re referring to the market, or the country, or humanity, or whatever collective you want to choose - are going to step on one on the way to ushering in a black swan event. 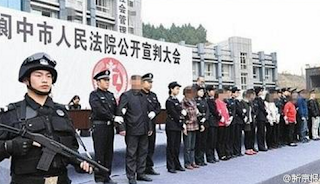 But when we look out across markets and across the political landscape it’s difficult to escape the feeling that there are more black swans waiting in the wings - so to speak - than usual. There’s the threat of a dirty bomb being detonated in a crowded Western European urban center for instance. Or the chance that Turkey ends up “accidentally” killing a Russian or Iranian soldier while shelling the Azaz corridor. And how about the possibility that China tries to save its economy by chancing a 30% devaluation of the yuan and inadvertently plunges the world into a crisis far worse than 2008?


The interesting thing to note about the third crisis event listed above is that an economic implosion in China may spawn a black swan far larger than that which would emanate from a crisis in the country’s banking sector and/or a deeper devaluation of the RMB.
Read more »
Posted by Angelo Agathangelou at 3:47 pm No comments: Links to this post

Blaire White: "I was going to be nice but then I came across the meet the team page at everyday feminism and it's fucking hilarious!"

Posted by Angelo Agathangelou at 11:13 am No comments: Links to this post

Ken O'Keefe: "The ability to think for ourselves is the first thing they strip from us. They basically get us to regurgitate a bunch of trivial pursuit questions on command and if you do that well enough then you get to go to university and you get to regurgitate slightly more complex trivial pursuit questions and if you do that on command well enough and you jump through this hoop and that back flip and so on then you get the job and you make the money and then you live the so-called American dream."

Read more »
Posted by Angelo Agathangelou at 9:08 am No comments: Links to this post

MHRA Sheila Gunn Reid reports on a Canadian Supreme Court ruling that has found a woman who killed two babies not guilty of second degree murder but guilty of the lesser charge of infanticide. As a result of this ruling, Sheila looks into the privileged treatment women receive under our laws and asks, where's that male privilege we keep hearing about?
Posted by Angelo Agathangelou at 6:27 am No comments: Links to this post

“Why Support Democracy In Syria But Not Saudi Arabia?” Mehdi Hasan Of Al Jazeera Asked The Saudi Ambassador

At 9:15 Mehdi Hasan begins the line of questioning where he asked. “Why Support Democracy in Syria but Not Saudi Arabia?”
Al Jazeera: Nearly a year into the Saudi-led coalition's airstrikes in Yemen, what does the kingdom hope to gain? In this week’s wide-ranging Headliner interview, Mehdi Hasan speaks to Abdallah al-Mouallimi, Saudi Arabia’s ambassador to the UN, about the country’s involvement in Yemen and Syria, ISIL, JSIL and the kingdom’s human rights record.

Read more »
Posted by Angelo Agathangelou at 3:10 am No comments: Links to this post 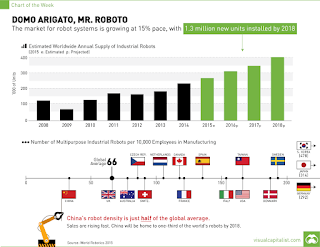 According to the World Robotics 2015 report, the market for industrial robots was approximated at $32 billion in 2014, and in the coming years it is expected to continue to grow at a compound annual growth rate (CAGR) of at least 15%.
That means between 2015 and 2018, it’s anticipated that 1.3 million industrial robots will be installed worldwide. This will bring the stock of operational robots up to just over 2.3 million, mostly working in the automotive and electronics sectors.
For how long can the global robot population continue to grow?