Sargon of Akkad:
And the meek shall try to inherit the Earth,
using guilt and shame.

Angelo Agathangelou: We were recently exposed to some previously ignored facts via the black historian Tony Martin, that Jews had a greater proportion of slaves than European Americans, Jews owned the slave ships that ran the famous slave triangle and the East India company and after all it was the white British people who first moved to abolish slavery.

By Paul Craig Roberts: As I have emphasized since these “partnerships” were first announced, their purpose is to give corporations immuity from the laws in the countries in which they do business. The principle mechanism of this immunity is the granting of the right to corporations to sue governments and agencies of governments that have laws or regulations that impinge on corporate profits. For example, France’s prohibitions of GMO foods are, under the “partnerships,” “restraints on trade that impinge on corporate profits.
The “partnerships” set up “tribunals” staffed by corporations that are outside the court systems of the sovereign governments. It is in these corporate tribunals that the lawsuits take place. In other words the corporations are judge, jury, and prosecutor. They can’t lose. The “partnerships” set up secret unaccountable governments that are higher and have power over the elected governments.
You can ask yourself how much money the representatives of the countries who “fasttracked” this system were paid by the corporations and how much the bribes will be to get the agreements approved by the legislators. As you witness American, British, German and other government officials agitate in behalf of corporate rule, you will know that they have been well paid. 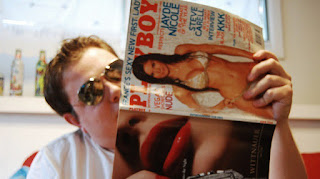 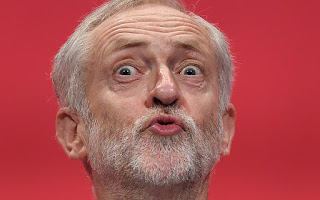 Via John J4MB: This piece in The Jewish Chronicle two months ago. An extract:

The meeting had been “the beginning of a conversation” between British Jews and the party, Mr Arkush said. A second meeting is planned for later this year.


Mr Corbyn said he was “looking forward to continuing that dialogue”.
“I am a lifelong campaigner against racism and fascism in all forms, and I made it clear that I am utterly opposed to antisemitism in any form, including denial of the Holocaust, from any part of the political spectrum.
“The Jewish community is a vibrant and much valued part of our diverse UK society, and I will continue to defend the right to religious freedom and practice, including specifically shechitah and the brit milah, [my emphasis] Jewish faith schools, and culturally sensitive youth and social care services.

Corbyn will evidently not defend the legal right of male minors not to have their genitals mutilated on non-therapeutic grounds. There must be fewer votes in that principled and humane position.

Read more »
Posted by Angelo Agathangelou at 4:54 pm No comments: Links to this post

"The few nasty fuckers at the top represent the real will of the masses, they're fall guys, the elite are the idiot kings, the fool emperors, the mask of the monster hanging on a hidden face of humanity's ugly monkey mug." Said Deek Jackson.
Posted by Angelo Agathangelou at 3:40 pm No comments: Links to this post

Mike Buchanan: Shelagh Fogerty is a well-regarded presenter on LBC Radio, and this discussion about paternity fraud centred on the issue of mandatory paternity testing at birth. - J4MB strongly supports the policy, and it was in our 2015 general election manifesto. - Arguing against the idea was Dr Anna Smajdor, a Lecturer in Ethics at the Norwich Medical School: web.archive.org/web/20160407152415/https://www.uea.ac.uk/medicine/people... Dr Smajdor's utter lack of interest in men who are the victims of paternity fraud, and lack of compassion for them - and for the children also affected by the fraud - was simply breathtaking.

Michael Rosen And The Kosher Sandwich 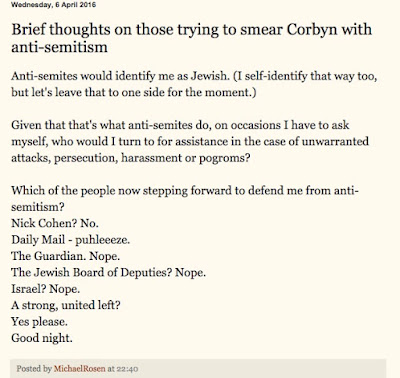 Discourse Analysis By Gilad Atzmon: If you wonder what the role of the Left is in the 21st century, if by mistake you bought into the idea that the Left has something to do with the oppressed, the British poet Michael Rosen will enlighten you. The Left has one true mission: it exists to save the Jews from the next pogrom.

Read more »
Posted by Angelo Agathangelou at 11:00 am No comments: Links to this post

Tory War On Mothers Shows They Are Still The Nasty Party

By  Laura Perrins: Shared parental leave, toddlers biting each other in nurseries and locking up pre-schoolers for nearly 12 hours a day, oh Brave New World that has such wondrous events in it. Behind all these stories is one golden thread – the war on mothers and their relationship with their children. 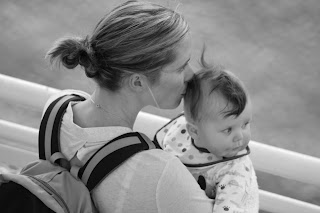 It comes as no surprise that the new fandangled shared parental leave (SPL) policy has only a one per cent take up. For now, at least, it is still the norm that mothers care for their babies, and it is new born babies and infants we are talking about here, not toddlers or school-aged children.
All day on Tuesday the airwaves were filled with the idea that mothers “should no longer be seen as the primary care givers.”
Yet this is what the majority want – 55 per cent of mothers said they did not want to share any of their maternity leave. Yes, mothers should be the primary carers to their newborns. The mother-child relationship is unique, deserves nurturing and is the basis for a caring, stable society. What those who have declared war on motherhood are trying to do, is to reshape reality itself.
Mothers have carried their babies for nine months – what kind of society tries to interrupt this most intimate of relationships before it has barely begun?

Read more »
Posted by Angelo Agathangelou at 2:23 am No comments: Links to this post

The bitter irony of a trade agreement. 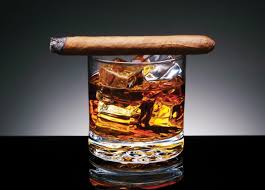 By Don Quijones: International arbitration lawyers have a soft spot for Latin America, for a reason: over the last ten years, the region has been one of the primary sources of their exorbitant fees, which can range from $375 to $700 per hour depending on where the arbitration takes place.
By 2008, more than half of all registered claims at the International Centre for Settlement of Investment Disputes (ICSID) were pending against Latin American countries. In 2012, around one-quarter of all new ICSID disputes involved a Latin American state.
Today the region faces a fresh deluge of ISDS claims. The countries most affected include Uruguay, whose anti-tobacco legislation has been challenged by Philip Morris at an international arbitration panel; Argentina, Ecuador and Colombia, which until a few years ago had never been on the receiving end of an investor-state dispute settlement (ISDS). Now it is the target of multiple suits that could end up setting its government back billions of dollars.