The Great Leap Backward: America’s Illegal Wars On The World

By Luciana Bohne: Can we face it in this election season? America is a weapons factory, the White House a war room, and the president the manager of the neoliberal conspiracy to recolonize the planet. It exports war and mass poverty. On the economic front, usurious neoliberalism; on the military front, illegal wars. These are the trenches of America’s battle for world domination in the 21st century.
If not stopped, it will be a short century.
Since 1945, America’s Manifest Destiny, posing as the Free World’s Crusade against the Red Menace, has claimed 20 to 30 million lives worldwide and bombed one-third of the earth’s people. In the 19th century, America exterminated another kind of “red menace,” writing and shredding treaties, stealing lands, massacring, and herding Native populations into concentration camps (“Indian reservations”), in the name of civilizing the “savages.” By 1890, with the massacre of Lakota at Wounded Knee, the frontier land grab—internal imperialism– was over. There was a world to conquer, and America trained its exceptionally covetous eye on Cuba and the Philippines.
American external imperialism was born.
Then, something utterly dreadful happened in 1917—a successful social revolution in Russia, the second major after the French in 1789, to try to redistribute the wealth of the few to the advantage of the many. The rulers of the world—US, Britain, France and sundry acolytes—put aside their differences and united to stem the awful threat of popular democracy rising and spreading.

Who Controls The U.S. Media?

Media has never been more consolidated. Six media giants now control a staggering 90 percent of what we read, watch, or listen to.
Posted by Angelo Agathangelou at 10:01 pm No comments: Links to this post

“Ain’t No Rest For The Triggered” - Social Justice: The Musical + Hey Triggly


YouTube has decided, after a month long Fair Use dispute, that I can’t make money from this video. Which is fucking wonderful. I spent too much time on this not to show you guys, so fuck it. Here you go. You can still support me by downloading the track here –
https://chrisraygun.bandcamp.com/track/aint-no-rest-for-the-triggered

Read more »
Posted by Angelo Agathangelou at 8:51 pm No comments: Links to this post

Ryan Dawson said. "I have to call a spade a spade and Zio-Stefan's got to come down a peg. ...For a guy that wants to have vigorous discussion, he's very good at avoiding it. ...They deleted the highly liked comments that suggested they have on a real guest to talk about 911. ...He just wants to argue with morons and do victory dances."
Posted by Angelo Agathangelou at 1:52 pm No comments: Links to this post

In Syria, Russia Defends Civilization - The West, Sides With Barbarism

Russia's concert in Palmyra was a blow against the barbarism of Daesh and the cynical indifference of the West.

By The Saker: The recent Russian concert in Palmyra was an event loaded with symbolism.  While it was the Syrians who liberated this ancient city and while the Russian only provided support, this support was crucial and, besides, it was not just Palmyra which Russia saved, but the Syrian nation.  I would even argue that Russian in Palmyra saved not just Syria, but all of civilization.
Imagine you are an extraterrestrial watching our planet from space. Not only would you see the unspeakable atrocities committed by the Daesh liver-eating psychopaths, but you would see that the Empire which runs most of the planet, and the so-called “western civilization” which shaped our modern world more than any other civilization, have given their full backing to the Daesh.
You would see the US TOW missiles used against the only army capable of standing up against Daesh, you would see all the countries making up the so-called “concert of nations” (about, maybe, 1/3rd of the countries out there) calling for the overthrow of the legal and legitimate President of Syria even if that means that a black Daesh flag over Damascus.
You would see the genocide of Christians while the putatively Christian world looks away and the genocide of (all non-Takfiri) Muslims while the putatively Muslim world looks away.
Read more »
Posted by Angelo Agathangelou at 11:17 am No comments: Links to this post

By Eric Draitser: With the war in Syria raging in its fifth year, and the Islamic State wreaking havoc throughout the Middle East and North Africa, it’s clear that the entire region has been made into one large theater of conflict. But the battlefield must not be understood solely as a physical place located on a map; it is equally a social and cultural space where the forces of the Zio-US-UK-NATO Empire employ a variety of tactics to influence the course of events and create an outcome amenable to their agenda. And none to greater effect than propaganda. 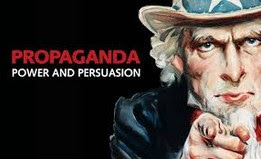 Indeed, if the ongoing war in Syria, and the conflicts of the post-Arab Spring period generally, have taught us anything, it is the power of propaganda and public relations to shape narratives which in turn impact political events. Given the awesome power of information in the postmodern political landscape, it should come as no surprise that both the US and UK have become world leaders in government-sponsored propaganda masquerading as legitimate, grassroots political and social expression.
London, Washington, The Zionist Jews and the Power of Manipulation
The Guardian recently revealed how the UK Government’s Research, Information, and Communications Unit (RICU) is involved in surveillance, information dissemination, and promotion of individuals and groups as part of what it describes as an attempt at “attitudinal and behavioral change” among its Muslim youth population. This sort of counter-messaging is nothing new, and has been much discussed for years. However, the Guardian piece actually exposed the much deeper connections between RICU and various grassroots organizations, online campaigns, and social media penetration.

All Women As Whores - MGTOW

An evaluation of the MGTOW assertion that all women are whores. Groundwork For The Metaphysics of MGTOW
Posted by Angelo Agathangelou at 6:08 am No comments: Links to this post 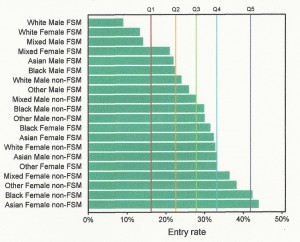 Participation rates in HE by demographic (from UCAS, End of Cycle Report 2015, p.130).
FSM = free school meals, an indicator of disadvantage. Note that eight of the top nine are female.
By William Collins aka mra-uk: Today the Higher Education Policy Institute (HEPI) published a report, “Boys to Men: The underachievement of young men in higher education – and how to start tackling it“, by Nick Hillman and Nicholas Robinson. My opinion of the report is mixed. On the positive side, I welcome any authoritative body highlighting the issue of male disadvantage in education. It is especially welcome in view of its rarity: public bodies generally ignore the issue. This point is well made by the head of UCAS, Mary Curnock Cook, in her Foreword to the HEPI report,
“The recent Department for Education white paper, “Education, Excellence, Everywhere” makes no mention of the chronic under performance of boys in primary and secondary education.

'The more serious problem lies with the increasingly misandric nature of our society.'
Read more »
Posted by Angelo Agathangelou at 4:09 am No comments: Links to this post

Two feminists feed us more feminism bullshit as well as give us their personal recommendations with regard to who the cool feminists on YouTube are. - I really hope these femifascists respond to this video - I'm interested to see if they're willing to accept truth and reality when presented to them - or will they keep the blinkers on, bunker down and stamp their feet like toddlers throwing a tantrum. - I guess we'll see ..