"A title that pays homage to Karen Salmansohn's book, 'How to make your man behave in 21 days or less using the secrets of professional dog trainers.' It's just one offering in an entire genre of literature that people would say is dehumanizing to men, well, that is if they cared about men." Said Paul Elam.
Posted by Angelo Agathangelou at 10:41 pm No comments: Links to this post

1984 Today + You Are Being Watched While You Watch TV

On this day in 1949 a literary sensation was published - 1984 by the British writer, George Orwell. But who was George Orwell? And why is he relevant today- as the left-of-centre politicians debate mass surveillance and the Snoopers Charter in UK Parliament.

The Tragedy Of Syria And The Middle East At Large

By Peter Koenig and Amin Abadi: A few weeks ago, Amin Abadi from the The Kayhan Institute of Teheran asked me for a written interview on “The Tragedy of Syria and the Middle East at Large” – in English. A few days ago the interview was published in Farsi in Kayhan (Cosmos), one of Iran’s most prominent newspapers. Here is the English version.
***
By Amin Abadi: What is the major reason for Syrian crisis in your point of view, the crisis that includes massacre of thousands of people and homelessness of too many. 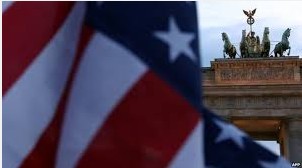 By 2011 the ‘opposition’ was ready to launch a civil war on behalf of Washington against the Government of Bashar al-Assad, the democratically elected President of Syria, elected with a vast majority; and after five-years of foreign imposed war on the people of Syria, his approval rating is still above 70%. The ‘opposition’ – al-Nusra, al-Qaeda and whatever other names the ‘western friendly’ opposition was given to confuse the public at large by western media, was trained, fed and armed by the CIA, Mossad, Saudi Arabia – and of course, Vassal-Europe’s / NATO secret services.
Backtracking – soon after WWII a few Zionist-headed US so-called ‘think tanks’, like the American Enterprise Institute, the Heritage Foundation, National Endowment for Democracy (NED), the American Israeli Public Affairs Committee (AIPAC) – and others, concocted a plan for the United States to take over the world.

Read more »
Posted by Angelo Agathangelou at 6:19 pm No comments: Links to this post

Raging Golden Eagle: So now that the majority of men seem to support the female draft (and other anti-traditionalist things), mainstream society is forced to recognize that we are not just some fringe minority anymore. Just like how Japan was shocked to one day find out that most young men are herbivores, the US is about to experience a similar shock.

Read more »
Posted by Angelo Agathangelou at 4:23 pm No comments: Links to this post

Challenging Official Propaganda In Search Of A Better And Kinder World

By Andre Vltchek: A young South Korean loses faith in the official dogmas that have been shaping his worldviews for most of his life

Thus now I have come to recognize the recently implemented sanctions against North Korea as an ‘injustice’. - Mr. Kim Dol
*** 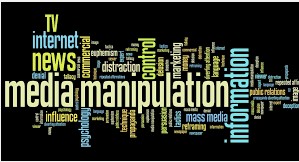 Above is a short excerpt from the letter that I received in May 2016, a letter from one of my readers, Mr. Kim Dol, a young South Korean professional based in Seoul.
Mr. Kim Dol, it seems, has been lately suffering from a gradual but irreversible loss of faith in the official dogmas that have been shaping his worldviews for most of his life – dogmas manufactured by his own country, South Korea (ROK), as well as those that have been imported from the West. He discovered countless contradictions between simple logic and what he was told, and expected to believe. He began questioning things, and searching for alternative sources.
That is how he found me. Online, he began reading my essays, as well as the essays of other comrades.
Read more »
Posted by Angelo Agathangelou at 3:01 pm No comments: Links to this post

US Terrorizes Europe For NATO Scam

By Finian Cunningham: The US has succeeded at last with its audacious con-job. The lead NATO member has managed to orchestrate a huge turnaround for increased military spending among its European allies. 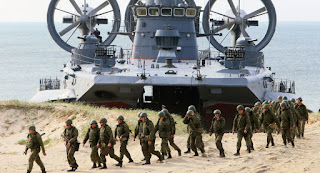 And at the heart of this scam is the hysterical anti-Russia propaganda campaign.
Over the past two years there has been a quickening drumbeat out of Washington and certain European capitals, warning of “Russian aggression” and “security threat”.
Bombastic accusations of Russia’s “annexation” of Crimea and “destabilizing” Ukraine – with the skimpiest of evidence – have all been thrown into a propaganda cauldron, stirred up and ladled out on the Western public by corporate and government-controlled “news” media.
It’s so corny, it’s unbelievable. But shamefully the Big Lie has worked its way into accepted policy.
The upshot is the dramatic deterioration in relations between Moscow and the West and the inculcated notion that Russia is a menace to the security of Eastern Europe and the Baltic states.
That, in turn, has driven calls – mainly by the Americans – for increased spending on NATO military forces. And that is the key to understanding this whole collective derangement.
Read more »
Posted by Angelo Agathangelou at 12:55 pm No comments: Links to this post 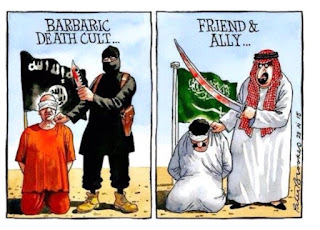 By Michael Krieger: The United Nations is not just worthless, it is downright dangerous. This is because it maintains an air of humanitarianism while its true purpose is to defend and shield the barbarism and war crimes of its most powerful sponsors.
The true farce of the U.N. was exposed in earnest last year when it named the terrorist state of Saudi Arabia to head up a human rights council. I covered this in several posts, but here’s an excerpt from one of them, Not a Joke – Saudi Arabia Chosen to Head UN Human Rights Panel:
Saudi Arabia is making a bid to head the United Nations’ Human Rights Council (HRC) just days after it posted a slew of new job openings for executioners who would help carry out beheadings amid a massive uptick in state-sanctioned killings in the country.
U.N. Watch, a nonprofit group that monitors the international body, disclosed Saudi Arabia’s intentions in a recent report and urged the United States to fight against it, describing the move as “the final nail in the coffin for the credibility” of the HRC.

Is The US State Of Georgia The Most Corrupt State In The Corrupt Country Or Merely Representative?

By Eric ZUESSE: The best reporting on the depth of America’s dictatorship is probably that being done by Atlanta Georgia’s NBC-affiliated, Gannett-owned, TV Channel “11 Alive”, WXIA television, “The Investigators” series of local investigative news reports, which show, up close and at a cellularly detailed level, the way things actually work in today’s America. Although it’s only local, it displays what meets the legal standards of the US federal government in actually any state in the union; so, it exposes the character of the US government, such that what’s shown to be true here, meets America’s standard for ‘democracy’, or else the federal government isn’t enforcing federal laws against it (which is the same thing as its meeting the federal government’s standards). 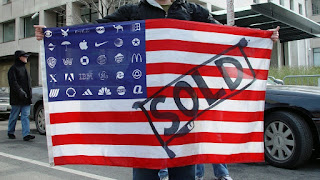 The links to three of these local TV news reports will be provided, along with a summary of each of the videos; and then the broader context will be provided, which ties the local picture in with the national, and then the resulting international, picture. So, this will be like a zoom-lens view, starting with three selected close-ups, and then broadening the view to wide-angle, showing the context in terms of which what’s happening in that fine detail (those close-up views) makes sense.

corbett: This year's official Bilderberg meeting agenda is the usual list of vague references to broad categories of topics...but is there anything we can gather from the topic list? And what of this year's participants? Join James for today's Thought for the Day as we break down the upcoming Dresden 2016 edition of the Bilderberg meeting.
Posted by Angelo Agathangelou at 4:16 am No comments: Links to this post