Max and Stacy discuss economic anxiety in a ‘divided America,’ in which ‘rosy averages’ bypass most. In the second half, Max interviews Chris Whalen about negative rates, outlook downgrades and central bank policies.
Posted by Angelo Agathangelou at 10:49 pm No comments: Links to this post

Read more »
Posted by Angelo Agathangelou at 8:51 pm No comments: Links to this post

On May 14, 1948, as Zionist leader David Ben Gurion was proclaiming a Jewish state in Palestine, his heavily armed troops seized the ancient Palestinian Arab town of al-Zeeb and drove out most of the inhabitants. 18-year-old Mariam Fathallah was one of them. She and her young husband Mohammed Atayah and their families were forced to flee to Lebanon, along with most of the town. By the end of the year, the 4,000 year old community had been leveled to the ground. More than half the Arab Palestinians in Palestine were killed or expelled and more than half of the cities, towns and villages of Palestine were made to disappear, a crime that Palestinians call al-Nakba (the Catastrophe).

We first met Jason Young in the video "Broken" in 2012. Jason came from Edmonton to Ottawa to see his kids for Father's Day. He has only supervised access to his children and this is often cancelled. He has not seen his children in over 6 months.
Posted by Angelo Agathangelou at 3:27 pm No comments: Links to this post

Shoe0nHead: Why? I dive into the depths of youtube for answers only to discover the horseshoe theory is worse than i thought. Also why the heck is it assumed that stand up comedy is the only form of comedy? help.
Posted by Angelo Agathangelou at 1:18 pm No comments: Links to this post

Israel! This Is No Way To Treat A Child 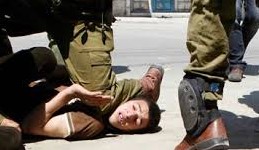 By Cathy Sultan: How do you tell your eight year old son that you cannot protect him from that eventual, fateful day when Israeli soldiers, in the middle of the night, will break down the family’s front door, enter his bedroom, forcefully pull him from his bed and, if so inclined, smack his head against the wall? What will go through your son’s mind when he sees you, his father and protector, beaten by the soldiers because you try to intervene? And what of the mental image he’ll keep of his helpless mother as their house is ransacked, his games and prized possessions crushed by callous soldiers whose job it is to harass and terrorize Palestinians because they can, with impunity?
Like his four brothers before him, when he comes of age, he will be blindfolded, his hands tied with a plastic cord so tight it will cut into his wrists at the slightest movement. His mother’s mournful cry will not deter the soldiers who will forcibly drag him to the waiting Jeep, kick and beat him on the way to the nearest settlement police station before finally, hours later, transferring him to a prison where his official interrogation, often with torture, will begin.

Read more »
Posted by Angelo Agathangelou at 10:31 am No comments: Links to this post

BBC: German Foreign Minister Frank-Walter Steinmeier has warned Nato against "warmongering", after it conducted military exercises in Eastern Europe.
Mr Steinmeier said that extensive Nato manoeuvres launched this month were counterproductive to regional security and could inflame tensions with Russia.
He urged the Nato military alliance to replace the exercises with more dialogue and co-operation with Russia. 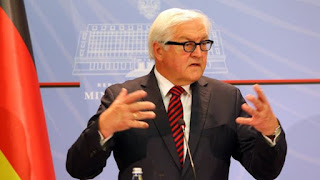 Nato has carried out a 10-day exercise simulating a Russian attack on Poland.
The drill, which ended on Friday, involved about 31,000 troops, as well as fighter jets, ships and 3,000 vehicles.
Russia has been strengthening its military presence near its borders. In February it held a combat-readiness exercise involving 8,500 troops in a southern region near areas of eastern Ukraine held by pro-Russian rebels.
In 2013, Russian jets staged a simulated attack on the Swedish capital Stockholm.


'Do not create pretexts'

"What we shouldn't do now is inflame the situation further through sabre-rattling and warmongering," Mr Steinmeier said in an interview to be published in Germany's Bild am Sontag newspaper.
"Whoever believes that a symbolic tank parade on the alliance's eastern border will bring security is mistaken. 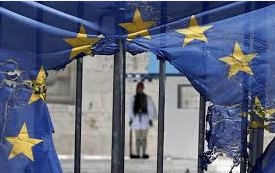 By Peter Koenig: With every day, the true face of Europe mirrors ever so clearer the abject inhumane colonial power that raped and usurped Asia, Africa and South America for hundreds of years, as so well depicted in numerous articles and essays by my friend, philosopher, historian and war journalist, Andre Vltchek. Every day this neo-colonial continent spits out new atrocities. And it’s getting worse. Jean Paul Sartre was right, when he said the US is but a Super-European-Monstrosity. The colonial Europeans, mostly Anglo-French Europeans, are at the helm of this monster-octopus, self-declared empire. They are behind the mysterious and Machiavellian eye on top of the pyramid on the US-dollar bill, the symbol of the Freemasons, the forefathers of today’s United States of America – and the driving force towards the New and One World Order.
They pull the strings via such semi-secret organizations like the Bilderbergers, Trilaterals, CFRs (Council on Foreign Relations), Chatham Houses, WEFs (World Economic Forum) – you name it.  Spineless individuals, like Bush, Obama, Clinton, Merkel, Hollande, Cameron – are mere vassals commandeering vassals; a construct that has grown so sophisticated and so evil – I’m sadly afraid, only eradication by war can stop it.

Putin: “We Know and they Know that we Know…People do not Understand how Dangerous the Situation Really Is”
http://www.globalresearch.ca/great-danger-us-nato-missiles-threatening-russia-putin-we-know-and-they-know-that-we-know/5531955
If You Value Life, Wake Up! By Paul Craig Roberts: Do you remember how close we came to Armageddon in the early 1960s when Washington put nuclear missiles in Turkey on the Soviet Union’s border and the Soviets responded by putting nuclear missiles in Cuba? Fortunately, at that time we had an intelligent president instead of a cipher. President John F. Kennedy pulled us back from the brink and was assassinated by his own government for his service to humanity.
For a number of years I have been warning that the recklessness of a half century ago has reappeared in spades. The crazed, insane, nazified, neoconized government in Washington and Washington’s despicable Europeran vassal states, especially the UK, Germany, and France, are driving the world to extinction in nuclear war. See, for example, http://www.paulcraigroberts.org/2013/12/14/washington-drives-world-toward-war-paul-craig-roberts
This is the most obvious fact of our time. Yet only the Russian government addresses Washington’s threat to life on earth.

Read more »
Posted by Angelo Agathangelou at 3:58 am No comments: Links to this post

The Big Guns Are Out: Soros, Rothschild Warn Of Brexit Doom; Osborne Threatens With "Suspending" Market

The big guns are officially out.
By Tyler Durden: Just yesterday, we recounted the story of "Black Wednesday" when on September 16, 1992, the UK was forced out of the EU’s exchange-rate mechanism, or ERM, when the BOE tapped out and allowed the British pound to float freely, leading to 15% losses in the sterling. As we noted, this was George Soros' infamous trade which "broke the Bank of England" and made the Hungarian richer by over $1.5 bilion. 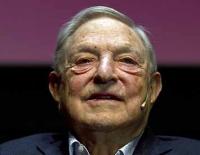 24 years later Soros is back, and this time he is warning against the kind of devaluation that made him a billionaire and which he believes will be unleashed by Brexit, when in a Guardian Op-Ed he wrote that U.K. voters are “grossly underestimating” the true costs of a vote to leave the EU, saying that there would be an "immediate and dramatic impact on financial markets, investment, prices and jobs."
He predicts that the pound would decline "precipitously", seeing a gargantuan drop of at least 15% and possibly >20% to below $1.15. Considering it has now become trendy for analysts to come up with ever "doomier" forecasts of just how low cable would plunge in case of Brexit, we are surprised Soros stopped there.

Read more »
Posted by Angelo Agathangelou at 2:18 am No comments: Links to this post