JHT "Recuperar la memoria" Álbum ~ Tambores de Agua
Translation of the lyrics:
"Did you know?
Black Friday came from auctioned slaves
and Thanksgiving came from natives exterminated
by sterilizing black women in Africa and Puerto Rico
They discovered by default the contraceptives
that Jews were not the biggest holocaust
but white contact with native original peoples
that the slave trade was not business but genocide

A bunch of feminazis are campaigning to get Philip Davies MP sacked for saying in a speech that “feminist zealots really do want to have their cake and eat it.”
By James Delingpole: As stories go this is right up there with: “Pope demands apology for outrageous ‘He’s a Catholic’ claim” and “Bears in furious denial of ‘sub-arboreal defecation’ slur.” 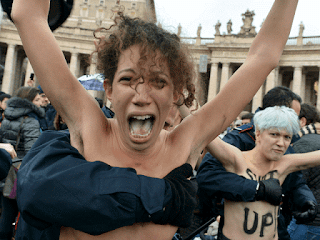 But the Guardian and the Guardian-reading bully mob clearly think that this is an issue of momentous significance because they’ve published a story titled “Pressure mounts on PM to respond to Philip Davies’ feminist zealots’ comments.”
Though I’ve read it half a dozen times now, I still can’t for the life of me what Davies has done wrong.
Is it his suggestion that feminists are zealots? If so, QED I’d say: their wild over-reaction proves his point more eloquently than anything Davies could have said in a speech.
If on the other hand, it’s the part about wanting to “have their cake and eat it” that’s made them turn all psycho, well what the speech shows is that Davies has taken considerable care to back up his point with concrete examples from real life.

"I don't give a fuck if women and gay men want to look at men's bulges, ...I like looking at women's cleavages. ...There will be women watching this who think I am a creep, ...not so with Cosmopolitan. ...Stop the double standards!" Said 6oodfella.

Mike Buchanan: A robust defence by Philip Davies MP of his excellent speech at our conference.
Posted by Angelo Agathangelou at 1:00 pm No comments: Links to this post

"Ever heard of women's temperance, ever heard of the KKK or WKKK? That's radical feminism! Why join the WKKK or Women's KKK. Casey is an artist who knits with her vagina in public, even whilst on her period!. ...If a guy was knitting out of his ass-hole, he would be registered as a sex offender." Said Barbara4u2c.

USA: Yes, The System Is Rigged

'How do we effect “regime change” here at home?'

By Patrick J. Buchanan: “I’m afraid the election is going to be rigged,” Donald Trump told voters in Ohio and Sean Hannity on Fox News. And that hit a nerve.
“Dangerous,” “toxic,” came the recoil from the media.
Trump is threatening to “delegitimize” the election results of 2016.
Well, if that is what Trump is trying to do, he has no small point. For consider what 2016 promised and what it appears about to deliver.
This longest of election cycles has rightly been called the Year of the Outsider. It was a year that saw a mighty surge of economic populism and patriotism, a year when a 74-year-old Socialist senator set primaries ablaze with mammoth crowds that dwarfed those of Hillary Clinton.
It was the year that a non-politician, Donald Trump, swept Republican primaries in an historic turnout, with his nearest rival an ostracized maverick in his own Republican caucus, Senator Ted Cruz.
More than a dozen Republican rivals, described as the strongest GOP field since 1980, were sent packing. This was the year Americans rose up to pull down the establishment in a peaceful storming of the American Bastille.
But if it ends with a Clintonite restoration and a ratification of the same old Beltway policies, would that not suggest there is something fraudulent about American democracy, something rotten in the state?

Read more »
Posted by Angelo Agathangelou at 8:06 am No comments: Links to this post

Labour MPs and feminist organisations have called on Theresa May to suspend Philip Davies after it emerged the Tory MP gave a speech pointing out how the UK justice system favours women. 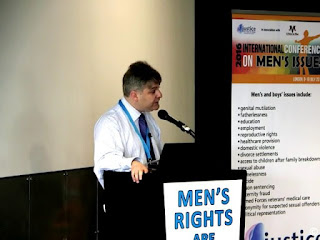 By Virginia Hale: Jeremy Corbyn is among the voices demanding Mr Davies be suspended from the Conservative Party for what the Labour leader called “deeply sexist” comments at a men’s rights conference. At the International Conference on Men’s Issues the Shipley MP detailed how, for the same crimes, women are much less likely to be sent to prison than men and are given shorter sentences.
In his speech on the “justice gender gap” the MP noted that despite this, feminist politicians are still calling for more lenient treatment for women offenders and, astonishingly, in doing so citing concerns about “equality”.
On Twitter, Mr Corbyn urged Theresa May to withdraw the whip on Mr Davies whose comments, the embattled Labour leader said, “are deeply sexist and show utter contempt for women”.

Max and Stacy discuss ‘crexit’ and the dark heart of Italy’s banking crisis as central bank intervention increases financial risk. In the second half Max continues his interview with Francine McKenna of Marketwatch.com about the current trials against the auditors taking place in courts across the United States.
Posted by Angelo Agathangelou at 2:21 am No comments: Links to this post

Raging Golden Eagle: South Korea has been between a rock and a hard place in recent years. They are getting spitroasted by rabid SJWs on one side, and traditionalist nutbags on the other.

Read more »
Posted by Angelo Agathangelou at 12:16 am No comments: Links to this post