PCR: Elect Hillary and she will take America to war with Russia—which means also China—and Iran. And the presstitutes aren’t the least bit interested.

***
Russia Insider: Paul Joseph Watson is on a roll lately.
His commentary is spot-on regarding the media giving Hillary a free pass for out-of-control Russia-bating, Russia bashing, and basically, irresponsible war-mongering.
It is going to backfire badly on her.

By Author Douglas Galbi: A man need not worry only about his wife or girlfriend cuckolding him. He should also be concerned that she might poison him. Amid gynocentric society’s contempt for men’s lives, hope for men rests primarily with God or gods. Even atheists agree that women are no more loved by God than men are. In fact, an ancient Latin epigram documents that the gods’ loving care for a man saved him from his adulterous wife’s double poison.

An adulterous wife gave a poison to her jealous husband,
but did not believe that she had given enough to kill him;
so she mixed it with a lethal amount of quicksilver,
so that the doubled potency would speed his death.
Separated, the substances themselves are individual poisons,
but the person who drinks them down together gets an antidote.
Thus while the noxious potions struggled with each other,
lethal harm yielded to health-giving poison,
and the potions went directly to the hollow recesses of the bowels
along the usual slippery way for digesting food.
What loving-kindness of the gods! The more cruel wife is beneficial,
and when the Fates will, two poisons work for good.

I thought if you could automate a robot to replace the traditional housewife's role of something to have sex with, as well as an artificial womb, an emotional intelligence to help raise your children, cook breakfast, lunch, and dinner, pack you a bag for work, shop for groceries, deep clean the entire house, wash and dry all your clothes, even take out the trash, and wash your car, then how else do you think women might re position themselves other than as a sex object or a domestic goddess?

Read more »
Posted by Angelo Agathangelou at 5:25 pm No comments:

Bearing: We catch up with Laci Green and special guest Blearing to discuss the gender thhhhhhhhhhhhhhhhhpectum and male privilege.

Sargon of Akkad: Help raise awareness for the millions of women suffering from undiagnosed autism!

Read more »
Posted by Angelo Agathangelou at 12:53 pm No comments:

How Intelligence Was Falsified To Support Invasion Of Iraq

British Ambassador Craig Murray explains how British professionals were pressured and threatened to permit false reports.
This is a good lesson in how bad things happen.
By Craig Murray: The recent Iraq Inquiry (commonly dubbed the Chilcot report) was in many respects highly critical of Tony Blair and other key figures in the British government’s decision to follow the United States to war in 2003. 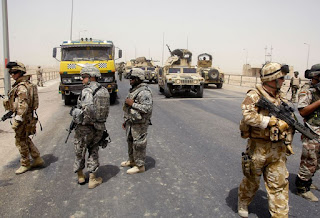 However, it stopped short of accusing anyone of willful deceit in making the case for invasion, and expressed no opinion as to the legality of that invasion.
The 2003 Iraq War was conducted in the face of huge public opposition and mass, worldwide protests. For many people, it threw the nature of Western democracies into doubt and contributed to a collapse of trust in the political establishment. For Iraqis, the invasion was a disaster of unimaginable proportions.
Many questions remain about why the war was launched and, in particular, how the intelligence in support of claims that Saddam Hussein possessed weapons of mass destruction (WMDs) was compiled and presented.
Craig Murray was British ambassador to Uzbekistan from 2002 to 2004.

6oodfella: My ugly mug is back, this time with a green screen effect. I hope you like it.

Read more »
Posted by Angelo Agathangelou at 3:31 am No comments:

By Gary Costanza: Dr. Hershel Goldman has been placed on the “Known Genital Mutilators” directory at neonatalcutting.org.
This is from his website circumcisioncentre.com.au:
“Congratulations On Your New Baby Boy!
Parents are faced with many important decisions throughout their child’s life on how best to establish the building blocks of optimum health, self-esteem and quality of life. A decision that is best considered early on in your son’s life is whether or not to circumcise.
As parents have the legal right to authorise circumcision, this website has been designed as a first step in helping you make an informed decision in understanding the benefits and risks of circumcision, and choosing the best option for your son.

Dr Hershel Goldman is the principle Doctor who runs the Melbourne Circumcision Centre and performs the circumcisions. He is a fully qualified General Practitioner with more than 30 years experience in performing neonatal circumcisions for both medical and ritual reasons.
Dr Goldman does not perform circumcisions on adults or children over 4 months. If you wish arrange circumcision for older children or adults, we advise you contact your regular Doctor, and ask for his/her assistance. If he/she cannot assist, you are welcome to come for an appointment, and Dr Goldman can advise and arrange an appropriate referral.”
Why does the doctor perform this abuse on baby boys only? Because he can.

Read more »
Posted by Angelo Agathangelou at 1:26 am No comments: