The New US [Male] Slave Revolt 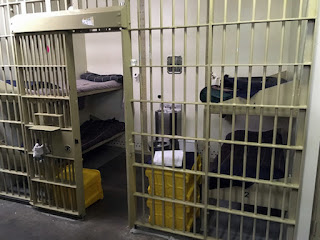 This round of prison strikes—there will be more—has had little outside support and press coverage. There have been few protests outside prison walls. Prison authorities—unlike during the 1971 Attica uprising when the press was allowed into the yard to interview the rebellious prisoners—have shut out a compliant media. They have identified strike leaders and placed them in isolation. Whole prisons in states such as Texas were put on lockdown on the eve of the strike. It is hard to know how many prisoners are still on strike, just as it is hard to know how many stopped work or started to fast on Sept. 9.

Read more »
Posted by Angelo Agathangelou at 10:11 pm No comments:

Trump’s Gaffe Exposes The Hypocrisy Of The Liberal Fascists

By Kathy Gyngell: There’s a new puritanism abroad, a new moral army on the march sweeping all before it. Rooting out misogyny is its mission. As the reaction to the Trump’s sex tape stole the headlines, it was Oliver Cromwell not George Orwell who came to mind. 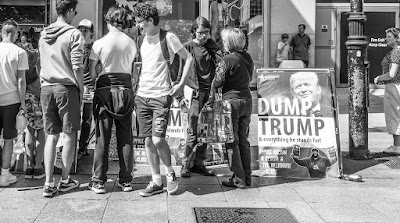 Trump has proved a gift to the feminists. What an opportunity to make men sign up. Convert – accept feminist orthodoxy – or you too will be publicly pilloried.
Just three months after MP Jo Cox’s murder, we find ourselves in the grip of a new hysteria. Commentators are literally queuing up to publicly register their moral revulsion at the second of today’s twin evils of racism and sexism, desperate to distance themselves from recalcitrant and unspeakable members of the male species like Trump.

Read more »
Posted by Angelo Agathangelou at 8:52 pm No comments:

Read more »
Posted by Angelo Agathangelou at 7:47 pm No comments:

By Gary Costanza: Robert Wasnick MD [right] of Stony Brook (NY) Children’s Hospital has been placed on the “Known Genital Mutilators” directory at neonatalcutting.org.
He’s part of the supposedly illustrious and cutting-edge (pun intended) medical establishment at Stony Brook Medicine, which is affiliated with Stony Brook University where the HeForShe UN Women’s director recently lapsed into the 19th century, saying condoms are “not the answer,” advocating circumcision to combat HIV. Dr. Wasnick is listed as a specialist at the Department of Pediatric Urology at the Stony Brook Children’s Hospital website.
From the website:
“Overview
Part of Stony Brook’s renowned Department of Urology, the Department of Pediatric Urology at Stony Brook Children’s Hospital provides highly specialized care for children with acquired and congenital urologic conditions. As a regional leader, Stony Brook is the only hospital in Suffolk County to offer advanced pediatric urologic procedures such as hypospadias repair surgery, complex reconstructivesurgery, and minimally invasive robotic surgery. It also provides treatment and management for more common urologic conditions including enuresis (bedwetting), voiding dysfunction, hernias, circumcision and undescended testes.”

Read more »
Posted by Angelo Agathangelou at 7:17 am No comments:

Read more »
Posted by Angelo Agathangelou at 5:01 am No comments:

Groundwork For The Metaphysics of MGTOW: In this video I narrate a fictional story spanning 3 generations as to the emergence of wage slavery. - Imagine, then, that a small simple society, with five economic groups, lies in front of you.
In this little society there is neither currency nor money; commodities are directly exchanged, each one for every other one, separately. The people live on corn, potatoes, goats' meat and goats' milk. For each commodity there is only one group of producers. Group A produces corn; group B grows potatoes and makes machinery; group C consists of weavers; group D goat-herds; group E house-builders.

Read more »
Posted by Angelo Agathangelou at 2:08 am No comments:

Now Even The Scientific Method Is Sexist, According To Feminist "Scientists"...

Raging Golden Eagle: We kept telling feminists that if they want more women in STEM, THEY should go into STEM instead of gender studies. Well, it seems they took that advice and did just that, and now science is suffering because of it... WHAT HAVE WE DONE?!?!?!