The Orwellian War On Skepticism

Special Report: Official Washington’s rush into an Orwellian future is well underway as political and media bigwigs move to silence Internet voices of independence and dissent.

By Robert Parry: Under the cover of battling “fake news,” the mainstream U.S. news media and officialdom are taking aim at journalistic skepticism when it is directed at the pronouncements of the U.S. government and its allies.
One might have hoped that the alarm about “fake news” would remind major U.S. news outlets, such as The Washington Post and The New York Times, about the value of journalistic skepticism. However, instead, it seems to have done the opposite.

'Donald Trump was put into office to prepare America for war, a war the banks of Wall Street and the US military industrial complex are not presently in a position economically or industrially or otherwise, geopolitically, to win.' 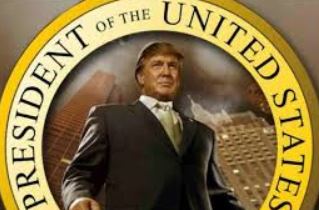 By F. William Engdahl: The project called the Trump Presidency has just two months before its formal beginning. Yet already the hopes and fantasies of much of the world are making him into something and someone Donald Trump most definitely is not. Donald Trump is yet another project of the same boring old matriarchs who try again and again to create a one world order that they control absolutely, a New World Order that one close Trump backer once referred to as universal fascism. Ignore the sometimes fine rhetoric in some of his speeches. Talk is cheap. If we consider rather the agenda that’s taking form even in these very early days of cabinet naming, we can see that Donald Trump is the same agenda of war and global empire as Obama, as Bush before him, as Bill Clinton and Clinton’s “tutor”, George H.W. Bush before him. There is no good side to what the world is about to experience with President Trump.

Read more »
Posted by Angelo Agathangelou at 9:41 pm No comments:

"Stop being a bunch of whiny little bitches!" Said Raging Golden Eagle. Things may slowly be turning around in some colleges, but others are FUBAR while still more are raging battlegrounds. Vote with your wallets, pick your college wisely, and let's make higher education great again!

Read more »
Posted by Angelo Agathangelou at 6:10 pm No comments:

Being A Man... The Festival

karen straughan: Join the badgers [link] as we talk about Dr Randomercam's experience at the "Be a Man" festival which claims to have issues concerning men in mind!

Read more »
Posted by Angelo Agathangelou at 1:17 pm No comments:

The Acceptable Bigotry Of Michelle Obama

By Mark Dent: Michelle Obama is considered a role model for the women and girls of America. Michelle Obama is praised in the most gushing, fawning manner in the mainstream media.
Michelle Obama is also an astonishing bigot.
There have been some occasions when I have felt she was undoubtedly a supporter of feminism and a believer in so many of the mythical notions feminists have about the way in which the world oppresses women. But it wasn’t until I read the transcripts of her interview with Oprah Winfrey in June of this year that I was introduced to her hateful, patronizing view of the entire male gender. 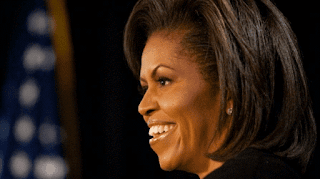 During the interview which naturally took place in front of an all-female audience, Michelle made the following observations about men.

Men should simply be better if they want to help women achieve gender equality. Be better at everything. Be better fathers. Good lord, just being good fathers who love your daughters and are providing a solid example of what it means to be a good man in the world, showing them what it feels like to be loved.

A woman with a powerful voice and a very public platform decides it is her right to sit in judgment upon the male gender and tell them how they can be better men and better fathers.

Read more »
Posted by Angelo Agathangelou at 10:20 am No comments:

Gary Orsum: A reworking of Monty Python's lumberjack song.
Posted by Angelo Agathangelou at 8:04 am No comments:

Via Jeff, J4MB: Cherie Blair’s reflections on BBC Newsnight – a particularly feminist-compliant programme, the anchor man being the supine Evan Davies. An extract: 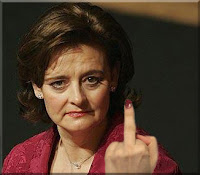 “I think we can’t just focus on the individual personalities. It’s about what is it that enables women to get to the top? And there does appear to be some kind of backlash.
“And what I fear is that we’ve rather given permission for people to say things which I thought that we’d stopped giving that permission…
“What seems to be a shame at the moment is we are getting things which are unacceptable which are being said, and being said by people who frankly should know better. And I think that’s a bad thing.”

“… we’ve rather given permission for people to say things which I thought that we’d stopped giving that permission.”?!!! Who the hell does this damnable woman think she is, speaking in such an imperious way? Big Sister, a sibling of Big Brother, denounding people for thoughtcrime? The harridan has become a compelling candidate for this month’s Toxic Feminist of the Month award.

Read more »
Posted by Angelo Agathangelou at 6:02 am No comments:

Max and Stacy celebrate 1000 episodes with special guests Steve Keen and Jim Rickards. They discuss how the meme wars began and where that war goes. They look at how the show began with the Obama administration and ripens into its 1000th episode in his last year having made The List.
Posted by Angelo Agathangelou at 3:51 am No comments: