johntheother: My New Years Resolution - make SJWs cry more than they did in 2016.
Posted by Angelo Agathangelou at 11:58 pm No comments: Links to this post

A New Way To Hold Women Unaccountable For Their Crimes

Mercedes Testone, 21, made a false rape allegation. She will avoid a conviction due to an ’emotional disability’.

This via a J4MB supporter: Extracts:

BRISTOL — A Danbury woman who filed a false rape complaint against a man in Bristol has been granted a program that could allow her to elude a conviction.
Mercedes Testone, 21, was granted the Supervised Diversionary Program Tuesday at her hearing in Bristol Superior Court. Judge Richard Dyer, who OK’d the program, said she will get treatment for an “emotional disability” — the details of which were not disclosed.
Dyer made a ruling that Testone’s disability had a “substantially adverse” effect on her behavior and could have contributed to her allegedly making a fake rape story up.
If Testone is successful in treatment, her case will be dismissed on June 19, 2018…
A day after filing the complaint, Testone called police and said she no longer wanted to pursue it. Later in the day, police said, she called again and admitted she made the whole rape story up because her child’s father had not let her daughter spend the night with her.

I predict an increasing number of women not being held accountable for their crimes, due to ’emotional disabilities’. Why doesn’t the criminal justice system adopt a new system, to save time and money? At police stations, a lady doctor could confirm that criminals claiming to have a vagina actually have one, then they could be released, and any potential charges dropped.

Read more »
Posted by Angelo Agathangelou at 10:08 pm No comments: Links to this post

The Greatest Truthful Documentary On Feminism Ever Made? MGTOW - Social Justice Cry-Cis

MrBlackcatzify: For more logic - Vernaculis - check out his channel here - https://www.youtube.com/channel/UClzN... MGTOW! :) Fuck Feminism!
Posted by Angelo Agathangelou at 7:50 pm No comments: Links to this post

Max and Stacy discuss all the free lunches harming the global economy. In the second half Max interviews Father Nathan Monk, author of ‘Chasing the Mouse’, about homelessness in America and building tiny houses.
Posted by Angelo Agathangelou at 3:46 pm No comments: Links to this post

The Much Overused "You Are Just As Bad As Them!" Accusation + Everything In (Community/Forum) Moderation

Raging Golden Eagle: The "you are just as bad as them!" accusation is so overused, that even in the rare instances that it is spot on it's now starting to be ignored. So what REALLY makes them "bad"? What is it you actually have to do to be "just as bad as them"? And let's look at the difference between being "bad" and just being a good strategy.

Rise Of Antisemitism Under Question

Press TV: Anti Semitism fake news...When there is no antisemitism Israel will just invent it..

Posted by Angelo Agathangelou at 5:45 am No comments: Links to this post 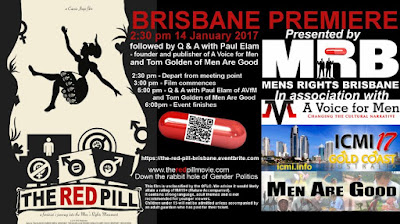 By Robert Brockway: The Red Pill will be screened in Brisbane, Australia on January 14, 2017. The first attempt at the Australian premiere of The Red Pill in Melbourne was cancelled by the venue, The Palace Cinemas, only 11 days before the intended screening. The organisers went above and beyond to find a new venue. The planned Sydney screening was cancelled by the venue Western Sydney University, only eight days before the intended screening.
To prevent the same in Brisbane the organisers will not be releasing information about the venue until the day before the screening. An inner city meeting point will be advised on the Men’s Rights Brisbane facebook page after close of business on January 13 (UTC+10) to save our host venue from harassment. A Facebook event page has been set up here.
Let’s make Brisbane the first Australian city to screen The Red Pill without having a screening cancelled first. Brisbane is just north of the Gold Coast, where ICMI17 will be held later in the year.

Read more »
Posted by Angelo Agathangelou at 4:10 am 2 comments: Links to this post

Monique Svazlian Tallon Is A Blithering Idiot
By Mike Buchanan: One of the supporters to whom I owe the most is Jeff, who has been relentlessly encouraging since before the launch of Campaign for Merit in Business in early 2012, almost five years ago, a year before the launch of J4MB.

Jeff is a terrific source of leads to articles, and recently sent me a link to a short opinion piece by Monique Svazlian Tallon, [right] titled, “Four Reasons Why We’re Still Talking About Diversity on Boards”. Jeff writes:

I have not read anything more infantile and ridiculous about gender diversity on boards than this diatribe, Mike. The sense of entitlement from this woman is overwhelming……I do hope you have the time to respond to her.

An extract from the piece should help you grasp what a blithering idiot the woman is:

The business case for having more women on boards is clear. It has been shown that when there are two or more women on a board of directors, the organisation performs better on it’s ROI by 66%.