'I kindly advise T’ruah and other Jewish human rights groups to be slightly more economical with their duplicity. By now, the Goyim know. They see it all and their patience is about to run out.'
By Gilad Atzmon: We learned a few days ago that 19 rabbis were arrested in NYC during a protest at Trump International Hotel. The Rabbi operates within the T’ruah organisation, a rabbinical human rights group that was formed (in 2002) to convey an image of Judaic ethical and universal awareness. 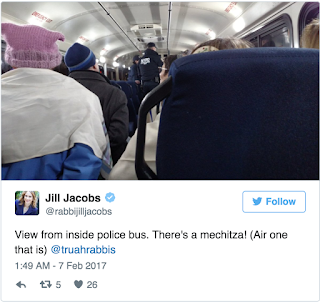 patch.com reports that the rabbis sat down in the street in front of the Trump Hotel in an act of protest against Trump’s executive orders affecting Muslim immigrants and refugees. But T’ruah do not just oppose Trump’s policy as ordinary human beings or American patriots. They actually operate as ‘Jews.’
Chutzpah, as we know, is a Jewish invention and Rabbi Jill Jacobs, T'ruah's executive director, has a lot of it in her disposal. "It makes a statement when we (Rabbis) are willing to put our bodies on the line.” she said.
Perplexed Goyim may wonder how exactly Rabbi Jacobs puts her ‘body on the line’ (sitting down on the street in the middle of Manhattan)? The rabbi must have realised how ridiculous her statement was, as she then corrected herself. "Right now the people whose bodies are really on the line are people trying to get to America, and risking death to do so. The least that we can do is put our bodies a little bit on the line...to bring attention to the situation of refugees.”
Rabbi Kleinbaum also added a statement concerning rabbinical heroism. “I’m risking arrest today because America welcomed my own immigrant family to its shores, as it did millions of families before us who fled persecution.” But if Rabbi Kleinbaum is actually talking as an American Patriot who cares for American universal values, why is he protesting ‘as a Jew’? He should really protest as a proud American.
"As Jews, who know what it means to be targeted by discriminatory laws, we stand firmly with refugees fleeing war, persecution, and economic strife," T’ruah Rabbis said in a statement.
Along the years I have developed an allergy to “as a” statements in general and “as a Jew” proclamations in particular. For one reason or another, rather often ‘as a Jew’ constructions happen to be grossly duplicitous. If Jews know so much about persecution how come their Jewish State is institutionally racist and discriminatory towards minorities and gentiles? If Jews are pro immigration, how come their Jewish State is vile in its attitude towards illegal immigration. If the Jews ‘stand firmly with refugees’ isn’t it about time their Jewish State invites millions of Palestinian refugees to return to the land that belongs to them and them alone? Do T’ruah rabbis openly support the Palestinian right of return? If they do, they manage to keep quiet about it.
But let’s take it further, can the T’ruah rabbis report to us how many Syrians have found a refuge inJewish homes? How many refugees are living in rabbi Kleinbaum’s and Jacobs’ spare bedroom? Considering the war against Islam was a Zio-Con project, can the Rabbis tell us when is the last time they sat down in the street in front of Paul Wolfowitz’ or Bernard Henri Levy’s homes? After all, Henri Levy claimed that ‘as a Jew’ he ‘liberated’ Libya. Shouldn’t the T’ruah rabbis at least occupy the streets in front of the Israeli Embassy and AIPAC offices? After all, it was Israel and its lobby that pushed for war in Syria. It was Israel and its lobby that are directly involved in the creation of the refugee crisis in Syria.
I kindly advise T’ruah and other Jewish human rights groups  to be slightly more economical with their duplicity. By now, the Goyim know. They see it all and their patience is about to run out. 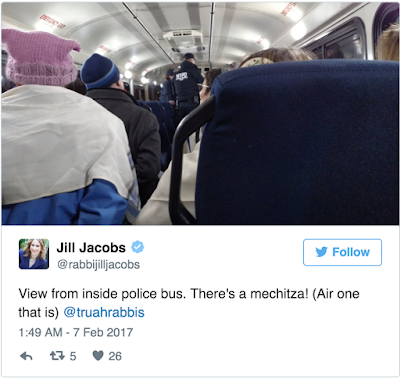 Posted by Angelo Agathangelou at 8:34 am