Captain Raymond Olafson: Another Victim Of The Modern US Military Feminist Witch Hunts 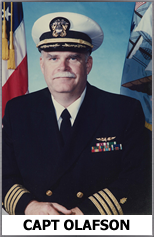 "SHE RAILROADED MY HUSBAND INTO PRISON,
THEN DROVE HIM TO AN EARLY GRAVE," WIDOW OF
NAVY  CAPT RAY OLAFSON SAYS - HER CHILDREN
(NOW GROWN) REVEAL FOR 1ST TIME "SCREAMING
JAG"  BETHANY PAYTON-O'BRIEN BULLIED AND
TRAUMATIZED THEM - "THAT EVIL BITCH TRIED TO
GET MY TEENAGE DAUGHTER TO SAY HER DAD
MOLESTED  HER," MARCIA OLAFSON RECALLS
"AMBER REFUSED TO LIE," WIDOW, MRS OLAFSON,
TELLS MILITARYCORRUPTION.COM - PAYTON-
O'BRIEN (NOW A MILITARY JUDGE) "LACKS THE
TEMPERAMENT OR ETHICAL INTEGRITY TO SERVE
AS A MILITARY JUDGE," ACCORDING TO DEFENSE
ATTORNEY, CDR JOHN B.WELLS, U.S. NAVY (RET)
Military Corruption: Marcia Olafson was married to her beloved husband, the late CAPT Raymond Olafson, for 50 years.  He was a career medical officer and highly-respected throughout the fleet..
It was some 18 years ago, when hell was unleashed upon him in the form of a young, aggressive Navy lawyer, Bethany Payton-O'Brien, who would make it her crusade to put this gentle, Christian man behind bars..


Olafson was a superbly-skilled physician who didn't suffer fools gladly.  A female enemy he made took it upon herself to write a false accusation that the four-striper had "molested" his children.  Even back in 1999, the "find them (men) all guilty, no matter what," politically-correct policy was in effect.
Ambitious and driven "women," like Payton-O'Brien, were in on the ground floor of a growing industry - sending men to prison for "sex crimes" whether they were guilty or not (see Related Stories below).  It proved to be a propitious career path, as the much-feared and despised Payton-O'Brien is now a captain herself and a military judge. 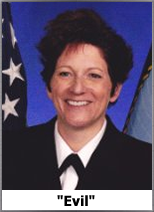 Famed military defense attorney, CDR John "Bulldog" Wells, USN (Ret.) tells us that "Payton-O'Brien was one of the worst JAGS I've ever had the misfortune to know,  When I went up against her in the Todd Forbes case, she pushed for a useless trial and conviction long after we had produced evidence which proved his innocence.
"As a prosecutor, Payton-O'Brien resisted all attempts to ensure a fair trial, even when acquittal seemed certain.  She bailed and forced one of her subordinates to take the losing case to trial.  Although my client eventually was vindicated, Payton-O'Brien cruelly put him through months of hell and high cost - both emotionally and financially.


"I am sorry to see the Navy has enabled her to last this long. How many others have been harmed, their lives and careers destroyed by her?  A long list, I am sure.  In my professional opinion, Payton-O'Brien lacks the temperament and ethical integrity to serve as a military judge.  Based upon the recent revealing remarks about her by ADM Lorge, I can only conclude that nothing has changed."


SHE "PERSECUTED" AS WELL AS
"PROSECUTED" MY HUSBAND


"I'll never forget how she persecuted - that's right, persecuted - not just prosecuted my husband," Marcia Olafson told MlitaryCorruption.com.  "In an effort to prove her false charges against Ray, she bullied and traumatized my children, trying to get them to say their loving father had hurt them. They all refused.


"I remember one time Payton-O'Brien tried to intimidate and interrogate my daughter Amber," Olafson said.  "When my teen-ager emerged from the room, she was shaking like a leaf, tears streaming down her face.  I held her in my arms and tried to calm her down, giving her a cup of water.


"That evil bitch JAG emerged from her office and screamed at us, her face twisted with hatred.  She threatened my daughter with jail and vowed to put my husband 'behind bars for the rest of his life'.


"My son, Alex - mind you, Payton-O'Brien was bullying and trying to suborn perjury from the very children she claimed were "victims," - was so angered by her obvious obsession to harm his father and our family, he told her "BACK OFF"' in no uncertain terms."


Mrs. Olafson  was prevented from even speaking with her husband and after his "railroad job" conviction, it was many months before the captain could communicate with his loved ones.  "He suffered greatly during that time," his widow said.


"I'm from Iowa and 90 per cent Apache," Marcia told MCC.  "Somehow the other inmates at the DB learned of this.  They were impressed by Ray's quiet dignity and were won over by an instance where he helped save the life of a sick prisoner.  Word went out throughout the prison from the Blacks and Hispanics that no one was to hurt Ray in any way.  The Native-American inmates especially loved and respected my husband."


THE LAST DECISION HE MADE


"We didn't get Ray back home until 2001, and by then, he was suffering from Parkinson's Disease and was a broken man.  The ordeal Payton-O'Brien put us through wiped out our life savings.  Ray had no income, and our legal bills took years to pay off.  She surely has a hot place in hell waiting for her someday."


"It was two days after Christmas, and Ray was fading fast.  The once-handsome, six foot tall Naval officer and doctor I loved and married had shrunk to only a shell of himself.


"I rose from our bed and quietly opened the closet door.  There on a hanger, along with his other civilian clothes, was the dress uniform of a Navy captain, blue and gold.


"Darling, do you want to be buried in this?" I gently inquired.


"Ray was silent for a few seconds, as he gazed in my direction, then a tear ran down his cheek and he slowly turned his head away.  He said not a word, but I had my answer.,


Dear Sir,
We respectfully urge you to retire CAPT Bethany Payton-O'Brien as a Naval officer and military judge as soon as possible.
In view of her record, it would be a mockery of justice for such a person to be promoted to flag rank or remain in a position to continue harming Naval personnel and their families.  Thank you.
MAJ Glenn MacDonald, USAR, (Ret.)
EDITOR-IN-CHIEF
MilitaryCorruption.com

[EDITOR'S NOTE: -- In a spirit of fairness - something alien to the obnoxious Bethany Payton-O'Brien - we offer her equal space on these pages to write her rebuttal to any of the charges and criticisms contained in this special investigative report .  Our only condition is that you respond truthfully to our questions in the Olafson and Forbes cases and numerous other instances in your long and disgraceful legal career.]

Posted by Angelo Agathangelou at 5:36 pm