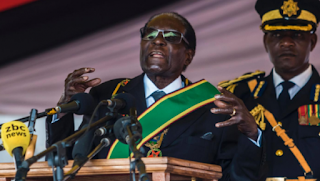 In 2000, Zimbabwe implemented a controversial land reform program that saw natives invade and re-capture hundreds of white-colonialist's stolen land around the country. As Newsweek details, the violent seizures resulted in the murder of several white farmers, with many more displaced, and close associates of Mugabe given large chunks of land.
And now, speaking at a rally in Harare, Mugabe confirmed this massacre will go unpunished, according to Zimbabwean news site NewsDay.
“Yes, we have those who were killed when they resisted. We will never prosecute those who killed them. I ask, why should we arrest them?”

And just in case you thought - well that was 2000, it's 2017 now and everything's changed - it hasn't!!
The president has also spoken out against white residents of Zimbabwe owning land.

“We say no to whites owning our land, and they should go,” Mugabe told supporters in 2014.

“They can own companies and apartments...but not the soil.”

Earlier in 2017, Mugabe said he was aware of 73 white commercial farmers still operating in the northeast province of Mashonaland East.


“We are going to take those farms and re-distribute them to our youths,” said Mugabe at a rally in April, speaking in the local Shona language, News 24 reported.

Mugabe has been in power in Zimbabwe since the end of the country’s war of independence in 1980 and is the world’s oldest non-royal head of state.


Posted by Angelo Agathangelou at 2:31 am