Only In Cali: New Bill Would Imprison Healthcare Workers For Using Incorrect Pronouns With Patients 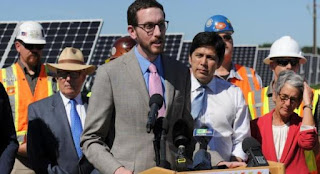 By Tyler Durden: California has a well-earned its reputation for introducing wacky legislation. Jerry Brown's bill specifically written to regulate cow farts is a personal favorite of ours.  For those who missed it the first time around, here is a brief recap of our post entitled "Only In California - Governor Jerry Brown Signs Bill To Regulate Cow Flatulence":

In yet another attack on California businesses, yesterday Governor Jerry Brown signed into law a bill (SB 1383) that requires the state to cut methane emissions from dairy cows and other animals by 40% by 2030.

According to a statement from Western United Dairymen CEO, Anja Raudabaugh, California's Air Resources Board wants to regulate animal methane emissions even though it admits there is no known method for achieving the the type of reduction sought by SB 1383.


"The California Air Resources Board wants to regulate cow emissions, even though its Short-Lived Climate Pollutant (SLCP) reduction strategy acknowledges that there’s no known way to achieve this reduction."

Among other things, compliance with the bill will likely require California dairies to install "methane digesters" that convert the organic matter in manure into methane that can then be converted to energy for on-farm or off-farm consumption.  The problem, of course, is that methane digesters are expensive and with California producing 20% of the country's milk we suspect that means that California has just passed another massive "food tax" on the country.

But a new bill penned by Senator Scott Wiener of San Francisco, dubbed the Lesbian, Gay, Bisexual, and Transgender Long-Term Care Facility Resident’s Bill of Rights (or SB-219 if you're into the whole brevity thing), takes wacky California legislation to a whole new level.  Among other things, the bill makes it illegal for employees of any "long-term care facility" to "willfully and repeatedly fail to use a resident’s preferred name or pronouns after being clearly informed of the preferred name or pronouns."

This bill would enact the Lesbian, Gay, Bisexual, and Transgender Long-Term Care Facility Resident’s Bill of Rights. Among other things, the bill would make it unlawful, except as specified, for any long-term care facility to take specified actions wholly or partially on the basis of a person’s actual or perceived sexual orientation, gender identity, gender expression, or human immunodeficiency virus (HIV) status, including, among others, willfully and repeatedly failing to use a resident’s preferred name or pronouns after being clearly informed of the preferred name or pronouns, or denying admission to a long-term care facility, transferring or refusing to transfer a resident within a facility or to another facility, or discharging or evicting a resident from a facility.

Meanwhile, here are couple of other actions that will now be considered a crime for healthcare workers in California:

(2) Deny a request by residents to share a room.

(6) Deny a resident the right to wear or be dressed in clothing, accessories, or cosmetics that are permitted for any other resident.

(7) Restrict a resident’s right to associate with other residents or with visitors, including the right to consensual sexual relations, unless the restriction is uniformly applied to all residents in a nondiscriminatory manner. This section does not preclude a facility from banning or restricting sexual relations, as long as the ban or restriction is applied uniformly and in a nondiscriminatory manner.

So what is the punishment for failing to observe someone's preferred pronouns?  Oh, just a year in prison and a $1,000 fine, according to CBN...
Just to clarify, 'choosing' your own gender and imprisoning people for failing to observe that 'choice' is wholly consistent with 'science' but Republicans are 'science deniers' for having the audacity to even question inconsistencies in climate change data....got it.

Posted by Angelo Agathangelou at 11:34 am