Jew Soros’ $18 Billions Investment In War Against The U.S. And Russia 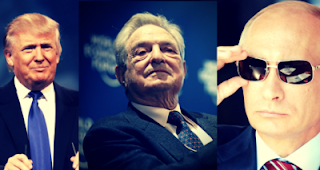 George Soros' move to shelter his money in Open Society Foundation means the war for global control just escalated.
By Tom Luongo: If you didn’t think there was a war on for both your soul and the control of global capital then yesterday’s article at the Wall St. Journal should convince you.  Billionaire ‘philanthropist’ George Soros just transferred $18 billion of his personal wealth to his leading organization, Open Society Foundation.
That’s right folks, $18 billion.  Cue the Dr. Evil close-up.
It also tells me that Soros himself is exiting the stage and turning it all over to his sons, who have been properly indoctrinated in the kind of corrosive interventionism and narcissism the elder Soros wears proudly.
Open Society Foundation is simply a regime change organization masquerading as a charity.  This wealth transfer is a signal that the push is on to finish The World that George Made (with apologies to Philip K. Dick).
The main question surrounding this is, “Why Now?” Why this move at this particular moment in time.  Because Rule #1, there are no coincidences in politics.

'Just remember that some pigs are more equal than others.'
Of course, something like this had to be in preparation for months, one does not simply cut a check for $18 billion dollars.  Not even Dr. Evil.

But, why the announcement of it on the same day as the bombshell about Soros’ main partner in crime, Hillary Clinton’s, treasonous behavior surrounding the Uranium One sale in 2010 to the Russian state nuclear energy giant Rosatom?

Questions are swirling around the events in Las Vegas as the official time-line and circumstances of the event break down into incoherence and obvious cover-up.  Reports of massive stock sales and short positions taken against MGM Grand by both the CEO of the company, James Murran, and Soros himself raise questions of his involvement in the massacre.
Am I accusing George Soros of creating a false flag incident in Las Vegas that claimed the lives of 59 people the night of the event and more since then?
No.
Am I saying that Soros is one of many potential backers of such an event who has motive, means, opportunity and will to pull something like this off?
Yes.
Soros has a self-admitted God-complex.  His Open Society Foundation has been thrown out of multiple countries, including Russia, for acting as a fifth-column advocacy group bent on fomenting unrest and the overthrow of Vladimir Putin.
Putin would have him arrested on sight if he set foot in Russia. His investment team gets an 11% return on that money.  Do the math.  That’s a $2 billion annual operating budget to buy influence, guns, drugs, politicians and build local protestor armies.
Hungary’s Prime Minister Viktor Orban has declared open war on him.  A consequence of Soros' control is that the U.S. Embassy in Hungary, according to Roger Stone, is completely staffed by Soros' people.  And Congress continues to block new appointments at both the Departments of Justice and State. Even the Israeli government has gone out of its way in recent months to take pot shots him, which they never do since Soros is Jewish.
He’s a Nazi Jew Hunter, but what’s a few chosen people among friends, right?
$2 billion a year is a lot of money.  But, his biggest targets are off-limits directly now.  So, when you look at it, where else is OSF going to spend that money?
The U.S.  And his influence in the U.S. continues to be felt in its policies towards Russia.

As a power-broker Hillary Clinton is a shell of her former self. It’s why Steve Bannon and Donald Trump (by proxy) could attack her support pillars in recent days, i.e. Harvey Weinstein.
But, Soros is the real prize. And this move by him may be his signal that not only is he stepping up his war to destroy the United States from within, but also to shelter that money from seizure when Trump’s Justice Department indicts him.
If you want to know what kind of ‘quo’ Trump could offer Putin’s ‘quid’ for a renegotiated Iran Nuclear Deal, all I have to say is, “George Soros.”  But, I’m just spit-balling here.  How would Trump go after Soros?
Insider trading vis a vis Las Vegas.
His buying $42 million in puts against MGM Grand could be enough to convene a grand jury against him and start the ball rolling.
The only open secret in the world bigger than Harvey Weinstein’s sexual predation is Soros’ profiting from and active funding of civil unrest around the world.

The war is far from over here, in fact it’s just getting started. But, the playing field is tilting back the other way.  And people like Soros and Clinton have been so used to clumsily running around the world creating false flags and overthrowing governments that any push-back is handled by their quislings in the media.
Now you know why Putin is reviled in the U.S. press.  He is their main opponent in Soros’ Holy War for ‘egalitarianism.’  Just remember that some pigs are more equal than others.  But, Putin has an ally now in the White House in this part of the war.
Trump, for all of his faults, has masterfully discredited the media in both the U.S. and in Europe.  The effect of this cannot be over-stated.  NBC News, CNN and the New York Times can’t say anything that anyone with political power in the U.S. believes, i.e. the Trump Base.
Their complicity in not covering the inconsistencies emanating from Las Vegas screams Soros and Clinton to me.  But, doubts about Las Vegas aren't going away.  Trump and Bannon will continue to isolate both Soros and Clinton in the coming weeks while Soros' girl in the EU, a weakened Angela Merkel, flails around trying to keep his dream of destroying the nation states of Europe alive.
Putin will continue to put pressure on the EU by being a great guy that wants to sell them gas and helping to put Syria back together, lessening the load of refugees Soros is paying to import into Europe.
No rapprochement between Russia and the U.S. is possible as long as Soros and Clinton are influencing U.S. foreign policy through their minions in Congress, i.e. John McCain.  Trump is tightening the noose around them while telling McCain,

That statement was not directed at McCain.  That statement was directed at the people who run him.  Soros may be stepping up the war, but he’s no longer fighting it on a single-front with the media behind him.  As his pieces are captured, he will be exposed and $2 billion a year, all of a sudden, doesn’t look like all that much.

Posted by Angelo Agathangelou at 8:52 pm