Current Sex Panic Harks Back To The Era Of Coddling Women

The outcome of #BelieveAllWomen is no utopia. We've seen such a repressive regime before. 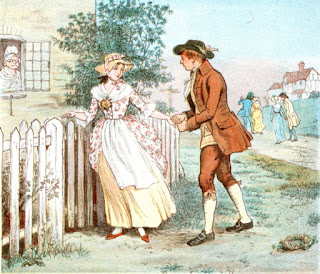 By Megan McArdle: Last week I considered our culture's vanishing burden of proof when a prominent man is accused of any sexual impropriety. Certainly I wouldn't want the bad old days of sexual harassment to continue. But there must be some way to find justice for women who have been abused without rushing to punish men who may not have abused anyone.
You can think of crimes as a sort of pyramid: At the top, there are a relatively small number of actions that we can all clearly agree merit the severest sanction, if proven. And then, as you slide down the walls of the pyramid, a growing number of cases that are less and less bad. At the base of the pyramid is a gray area where reasonable people can disagree about whether the evidence is strong, or the behavior alleged merits any sanction.
What happens if we try to apply the sanctions that are clearly merited for the guys at the top to the guys in the middle? What happens if we try to move the line down until it encompasses more and more of the guys at the bottom?
One risk is that the public will eventually rebel -- and that when they do, the public won’t distinguish between the top of the pyramid and the middle, because the people trying to raise awareness of a problem have deliberately blurred the lines. There’s a real risk that in the resulting backlash, the baby will get thrown out with the bathwater.
The same logic applies to the burdens of proof. If unsubstantiated claims are accepted at face value, then eventually enough will turn out to be false that many future claims will be disregarded -- whether they are plausible or not, whether they are substantiated or not. That was the harm done by cases like the Duke Lacrosse scandal, the UVA rape case, the Tawana Brawley accusations, and many others. But there’s another potential harm we also have to think about.
Let’s say that we do manage to establish a social norm that a single accusation of “inappropriate sexual behavior” toward a woman is enough to get you fired and drummed out of your industry. It's the crux of the issue so eloquently explored recently by Claire Berlinski: What would a reasonable and innocent heterosexual man do to protect himself from the economic death penalty?
One thing he might do is avoid being alone with anyone of the opposite sex -- not in the office and not even in social situations. You might, in other words, adopt something like the Pence Rule, so recently mocked for its Victorian overtones. (Or worse still, work hard not to hire any women who could become a liability.)

This would obviously be bad for women, who would lose countless opportunities for learning, advancement, friendship, even romance -- the human connections that make us human workers superior to robots, for now.
On the radio recently, I pointed out that this might be a logical result of a “one strike and you’re out” policy. The host, aghast, remarked that this was obviously not what we wanted. And of course, that isn’t what anyone wants. It might nonetheless be the logical result of the rules we’re setting up.
It’s easy for me to think of all the things I would have lost out on under a strict Pence Rule. The creative writing professor who conducted my independent study in his house, for example. It was perhaps a more innocent time, but even then I was not unaware of the sexual overtones our culture would see in a young female student going to a much older male professor’s home while his wife was at work. He was a perfect gentleman who made me cabbage soup, taught me to insert little slivers of garlic into a beef roast, and savagely critiqued my prose. David Slavitt, wherever you are, thank you for making me a better writer. And my condolences to all the female students today who will never have similar opportunities -- if I may judge by the bemusement/horror of male professors to whom I have told this story.
I think too about the older male colleagues over the years who have taken me out for drinks or lunch or dinner, held forth about politics and policy, and given me sagacious career advice. And about my younger male husband, who was also a journalist when we began dating. If the genders had been reversed, might our relationship have been seen as inappropriate? Might we have policed ourselves so carefully that we would never have developed a romance?
As I wrote last week: Do we want a world in which sexual harassment is rampant? Obviously not. But do we want a neo-Victorian regime where an accusation is as good as a conviction, and tight chaperonage is necessary to protect priceless, irreplaceable reputations from being unfairly besmirched?
I doubt that anyone wants that either. But that’s what we may well get if we keep destroying people based on marginal misbehavior, even transmitted through rumor and hearsay. So before we throw too many more people into Coventry, we’d better figure out if there isn’t some better middle way. Perhaps we need a truth and reconciliation commission in which men whose offenses fell into a gray area are allowed to confess their mistakes and move on with a promise to do better in the future. And perhaps too, we need some standards for just how much evidence we need, of what sort of offenses, to blacklist men for misbehavior.
Perhaps these are not the right suggestions; perhaps others can do better. But we have to find some middle ground between “Boys will be boys” and “Burn the warlocks!” Else we may discover that in trying to build a better future, we’ve accidentally resurrected our repressive past.

Posted by Angelo Agathangelou at 1:30 pm