By Gilad Atzmon: Haaretz reports today that “Jared Kushner's name was removed from a website of a group raising money for Israeli army.”
A week ago the American president promised the American people that from now on America will come first, but it seems as if for Trump’s senior adviser Jared Kushner, the Jewish state and its army are a priority.
Kushner is expected “to play a major role in drafting Middle East policy in the new administration,”  but can a Zionist Jew who raises money for the IDF be a peace broker for the Middle East? I’ll let you ponder over that one. 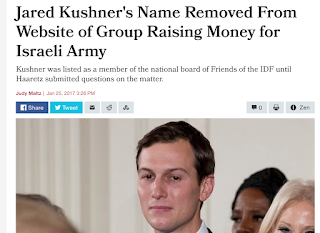 Apparently, the FIDF is a New York-based non-profit that raises tens of millions of dollars a year to support a wide array of educational and social programs that benefit Israeli soldiers and their families. Kushner’s name appeared on the FIDF website as a member of the national board until just two days ago. A day after Haaretz submitted questions about his continued involvement on the board to both the organization and to a spokeswoman for the Kushner family, his name was suddenly removed.
It is worth noting that although Kushner's name was removed from the FIDF's website, yet it is unconfirmed whether he is still linked to this body by any means.

Do Men Really Have All the Power? Paul Elam On The Men's Movement

TomWoodsTV: Paul Elam, the controversial founder of A Voice for Men, joins me to discuss family courts, no-fault divorce, feminism, and the state.

Posted by Angelo Agathangelou at 8:44 pm No comments: Links to this post

Jordan at The Screen: Join me, Spinosauruskin and Adam B as we interview Cassie Jaye following the Birmingham screening of The Red Pill. We met up in a (noisy) cafe in the Mac Arts Centre and had a few words after the success of the screening.
Posted by Angelo Agathangelou at 6:42 pm No comments: Links to this post

“Suicide was my biggest weapon. The thought of it gave me some peace; the thought that the cage was not entirely closed actually gave me some small strength to linger within the cage.” – Charles Bukowski 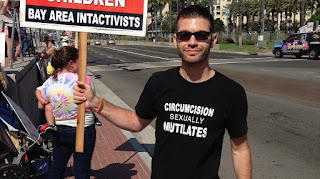 By Kevin Patten: Last year, our asinine American society lost a brave crusader. On May 9th, Jonathon Conte, a prominent Bay-area Intactivist, took his life. He was thirty-four. The tragic news was delivered by Marilyn Milos, the original conscious objector of circumcision, who posted on Facebook. Tributes poured out from the community.
They remembered his smile, infectious and without pretentiousness. The sincerity of his friendship, those who had the privilege of earning it. His dedication to the cause, the protests and the daily bike-rides he took through the city and the parks, always with his “info-cart” in tow. And the testimony he told of his own mutilation, that which no doubt led to this moment. Ever the meticulous planner, Conte acquired “pure helium” – supposedly hard to come by – and his death likely happened quickly; less pain than his infantile abuse.
In recordings and public statements, a crestfallen Mr. Conte recalled that at the age of fourteen he saw a video on the internet of an intact penis, leading to the swift realization that a piece of him “had been cut away.”

Read more »
Posted by Angelo Agathangelou at 3:31 pm No comments: Links to this post

Slang: The Original Voice For Men

By Doug Mortimer: Women talk more than men.  No one would dispute that.  Their standardized verbal scores are higher than their math scores, they are more likely to major in English, and the realms of publishing and editing have become heavily tilted towards women.  But when it comes to creative use of language, men need not take a back seat to women.  In fact, when it comes to slang, they are definitely in the driver’s seat. 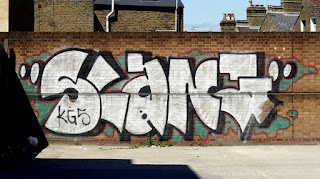 As defined in the unabridged Webster’s Universal Dictionary of the English Language in 1936, slang is “the cant expressions used by vagabonds, beggars and thieves.”  In this definition “cant” does not mean hypocritical or deceptive language but the specialized terminology of a particular subculture.  Of course, vagabonds, beggars, and thieves were overwhelmingly male in 1936 and still are today.
Now let’s flash forward a few decades and check out the Dictionary of American Slang, compiled and edited by Harold Wentworth and Stuart Berg Flexner in 1967:
Most American slang is created and used by males.  Many types of slang words – including the taboo and strongly derogatory ones, those referring to sex, women work, money, whiskey, politics, transportation, sports, and the like – refer primarily to male endeavor and interest.  The majority of entries in this dictionary could be labeled “primarily masculine use.”

Read more »
Posted by Angelo Agathangelou at 10:09 am No comments: Links to this post

Fake Rape: Every Man Must Watch This! Extended.. MGTOW

MGTOWN
Posted by Angelo Agathangelou at 7:57 am No comments: Links to this post

David Icke And The Meaning Of Jewish Power

By Gilad Atzmon: Jewish power is the power to suppress discussion on Jewish power. Seemingly this power is waning these days.
Jewish media outlets have reported today that campaigners are calling for a Manchester venue to be fined after it hosted “notorious anti-Semite” David Icke in front of a sold-out crowd this weekend. 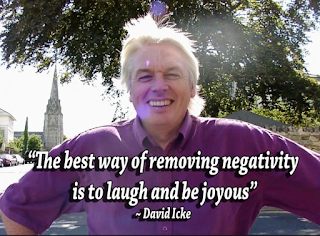 But what is it that makes Icke into a “notorious anti-Semite?” He reckons that Jews control the world and started WWI. Icke also believes that Jews dominated the Versailles Peace Conference and created the circumstances which made the Second World War inevitable.
It is rather obvious to every reasonable human being that in a free society, Icke is entitled to his thoughts and should be free to share them with the rest of us.
Apparently, Stephen Silverman, the director of Campaign against Anti-Semitism (CAA) doesn’t agree at all. Jewish history, he believes, can’t be discussed freely. But can you think of any other people who attempt to block the rest of us from looking into their past? Can Muslims, for instance,  stop us from looking into their history? As things stand, even the British ruling class doesn’t attempt to prevent us from looking into the crimes of British imperialism. 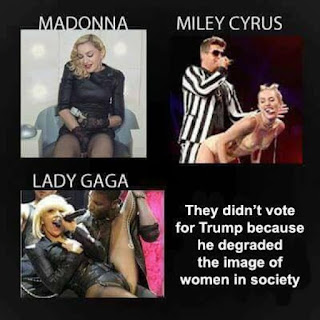 Via J4MB: A tip of the hat to ‘chatnoir50’, a commenter on a Guido Fawkes piece, “Feminist” Ewan McGregor defended child rapist Polanski.
Guido: Principled feminist Ewan McGregor pulled out of a TV interview with Piers Morgan this morning, tweeting: “Won’t go on with him after his comments about #WomensMarch.” Worth recalling a different interview McGregor was entirely happy to give: fawning over film director Roman Polanski, who was famously jailed for the rape of a 13-year-old girl whom he drugged and sodomised.