Has The American Establishment Opted For Thermo-Nuclear War? 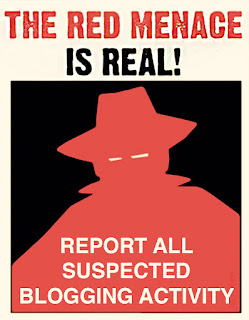 By Paul Craig Roberts: If you want to be an American TV talking head or a Western presstitute, you are required to be braindead and integrity-challenged like Bill O’Reilly, CNN, MSNBC, and the New York Times, Washington Post, Wall Street Journal and all the rest.
In an interview with President Donald Trump, O’Reilly said: “Putin is a killer.”
O’Reilly is indifferent to the fact that thermo-nuclear war is a killer of planet Earth. For O’Reilly, President Trump’s desire to normalize relations with Russia is an indication that the President of the US is comfortable making deals with killers, as if America’s last three presidents have not been mass killers comfortable with their destruction in whole or part of many countries and millions of peoples.
President Trump’s response to O’Reilly’s was: “We’ve got a lot of killers. What do you think – our country’s so innocent?”
The only thing wrong with President Trump’s response is that it implicitly accepts that Putin is no different from Obama, George W. Bush, and Bill Clinton. Yet there is no evidence that Putin is a “killer.” This accusation is an assertion from those who prosper from having a “Russian threat” to keep the money and power flowing to themselves.

Read more »
Posted by Angelo Agathangelou at 10:02 pm No comments:

The EU Is Supporting Terrorists In Syria

They were supporting al-Nusra and ISIS from the very beginning
SANA: President Bashar al-Assad stressed that Syria is owned by the Syrians and that the peace is two things: fighting terrorists and terrorism, stopping the flowing of terrorism, every kind of logistical support. Second, dialogue between the Syrians to decide the future of their country and the whole political system. 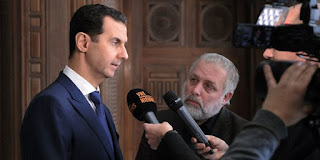 On his expectations from the new administration in Washington,  President Assad said, in a statement to Belgian media,What we heard as statements by Trump during the campaign and after the campaign is promising regarding the priority of fighting terrorists, and mainly ISIS, that’s what we’ve been asking for during the last six years. So, I think this is promising, we have to wait, it’s still early to expect anything practical. It could be about the cooperation between the US and Russia, that we think is going to be positive for the rest of the world, including Syria. So, as I said, it’s still early to judge it.
Question 1: Mr. President, we’ve been to Aleppo, we’ve seen the destruction, how do you see the way forward to peace nowadays after Astana?
President Assad: If you want to talk about how to see the peace, it’s not related mainly to Astana; it’s related to something much bigger: how can we stop the flowing of the terrorists toward Syria, or in Syria, how can we stop the support from regional countries like Turkey, Gulf states, or from Europe like France and UK, or from the US during the Obama administration.

Read more »
Posted by Angelo Agathangelou at 5:56 pm No comments:

By Ian Miles Cheong: The Yale Whiffenpoofs are the most prestigious all-male college a cappella group in the United States. Renowned for their performances, the troupe began in 1909 and each year, 14 Yale seniors are selected to join.


This year, a few women elected to audition for positions in the Whiffenpoofs. The group’s policy allows for women to audition, but remains strictly single-gender and does not admit women into its ranks. Besides the all-male group, Yale is also home to Whim n’ Rhythm, an all-female a cappella group.
But following fevered discussions of inclusiveness and diversity around Yale’s campus communities in recent months, students created a petition urging the “Whiffs” to admit women into its next class of singers. The petition has received more than 135 signatures from senior a cappella alumnae, students auditioning for the positions, and concerned students.
“Privileged institutions like the Whiffenpoofs can afford to open their arms to singers on the basis of talent alone. They have enough power—historically and financially—to support a more inclusive environment,” reads the petition.

Read more »
Posted by Angelo Agathangelou at 3:32 pm No comments:

Learning In The Line Of Fire

By Sarah Algherbawi: Wala, 16, always finds a seat away from the windows.The girl is a student at the Hayel Abdul Hamid secondary school in Beit Hanoun, a United Nations facility in the northern Gaza Strip. She has developed a phobia of sitting next to windows, afraid, she told The Electronic Intifada, of stray bullets. 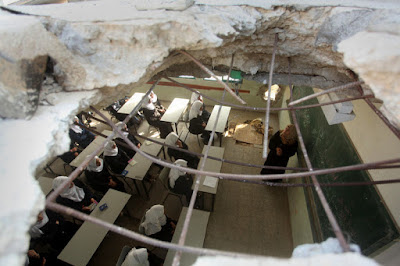 Left: A classroom at the Martyrs School in Khuzaa, which was damaged by Jewish Israeli shelling in the summer of 2014, as well as in previous assaults on Gaza, photographed in August 2015. Ashraf Amra
Her fear is well-founded. Beit Hanoun lies close to Gaza’s boundaries with Israel, and the concrete wall that marks the boundary is visible from Wala’s school. In such boundary areas Israeli gunfire is common and fatalities frequent. Mere closeness is a mortal danger as Israeli soldiers endeavor to keep quite expansive areas clear of residents, farmers or anyone else trying to get close.
When shooting near the boundary is especially fierce, Gaza’s ministry of education is forced to evacuate schools in the affected areas. According to Muhammad Nasser, who works at Gaza’s education ministry, in Beit Hanoun alone there are four schools, including the Hayel Abdul Hamid School, in so-called high-risk locations – within 1,000 meters of the boundary.

Read more »
Posted by Angelo Agathangelou at 1:39 pm No comments:

Via Rod, J4MB: The House of Commons website page on the Bill is here.
The body language of the MPs on the government benches (including Michael Gove, to Philip’s left) tells you all you need to know about the UK government’s attitude towards men’s issues – they’re an embarrassment to these apparatchiks. Gove was formerly the Justice Secretary, in which role he did precisely nothing about the extreme anti-male bias of the criminal justice system.
Posted by Angelo Agathangelou at 11:24 am No comments:

Zionists Creep In On Trump While Focus Is On SJW Nonsense

"The origin of all the lies that lead to war in Iraq came from a Zionist cabal, ...We know the architects of the Iraq war and their reasons, the Israelis wrote it out in policy papers before the war started and every pre-war lie came from them." Said Ryan Dawson.
Posted by Angelo Agathangelou at 10:06 am No comments:

Study Finds Most Government Workers Could Be Replaced By Robots

Submitted by Emily Zanotti: A study by a British think tank, Reform, says that 90% of British civil service workers have jobs so pointless, they could easily be replaced by robots, saving the government around $8 billion per year.

The study, published this week, says that robots are “more efficient” at collecting data, processing paperwork, and doing the routine tasks that now fall to low-level government employees. Even nurses and doctors, who are government employees in the UK, could be relieved of some duties by mechanical assistants. 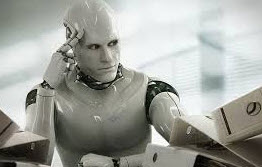 There are “few complex roles” in civil service, it seems, that require a human being to handle.

“Twenty percent of public-sector workers hold strategic, ‘cognitive’ roles,” Reform’s press release on the study says. “They will use data analytics to identify patterns—improving decision-making and allocating workers most efficiently.

“The NHS, for example, can focus on the highest risk patients, reducing unnecessary hospital admissions. UK police and other emergency services are already using data to predict areas of greatest risk from burglary and fire.”

Read more »
Posted by Angelo Agathangelou at 8:24 am No comments:

Canadian Association for Equality: Sunday glass of water with CAFE we begin with a brief commentary on the Red Pill Documentary, which CAFE has screened in several Canadian Cities. - Next, we address concerns with the controversial new Canadian Bill C-16. - We also raise the apparently shocking but true fact that men are more "Pro-Choice" than women are, and a few of the implications that arise from this fact.

The CIA & The Drug Trade

Corbett: Just as the British Empire was in part financed by their control of the opium trade through the British East India Company, so too has the CIA been found time after time to be at the heart of the modern international drug trade. From its very inception, the CIA has been embroiled in the murky underworld of drug trafficking.

Read more »
Posted by Angelo Agathangelou at 7:07 am No comments:

Therapy And The Broken Man

By Dr. Tanveer Ahmed: Darryl was a difficult patient I had been treating for several years who illustrated the contemporary challenges of his ilk. A stocky man in his forties, he shuffled into each appointment with a walking stick. At first sight, the stick gave him a distinguished quality but then a trace of his bare belly beneath a T-shirt that never quite fit over his bulging gut became visible.
“How are you travelling, Darryl?” I’d ask.
“Yeah, alright,” he’d mumble. “Fucken insurance pissing me off as usual.” 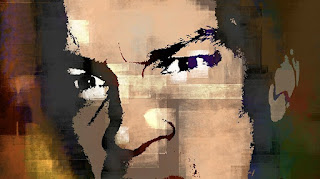 Darryl was being funded through worker’s compensation after suffering a crush injury to his lower back while lifting crates in a factory. He underwent several operations of inserting plates to metal rods in his spine, to the point where scans of his spine resembled a construction site, but his pain and mobility showed few signs of improvement.
His employer kept him on performing light duties, which was essentially a euphemism for doing the most basic paperwork, but the factory shut down after the manufacturing shifted overseas. He was made redundant but continued to receive compensation payments while he looked for alternative work.
There is an important term in mental health therapy called transference, which refers to the reactions patients arouse in therapists.

Read more »
Posted by Angelo Agathangelou at 3:45 am No comments:

By Toy Soldiers: Of all the types of sexual violence that occur, sexual violence committed by women remains the most taboo. Of the women who abuse, mothers remain the most hidden .
It shocks people’s senses to consider that a mother would rape her own child. We perceive mothers as nurturers and inherently good. While most of us are aware that there are bad mothers, people react negatively to any suggestion that a mother would abuse, let alone sexually abuse, her child. This notion of the inherent goodness of mothers and the need to view them positively is so ingrained in some communities that it can be used against them.

That attitude, coupled with people’s tendency to ignore female-perpetrated sexual violence, makes it difficult for victims of mother abuse to come forward. People will  take an incredulous stance and see the victim as impugning their mother’s character rather than sharing their experience. Even when people believe the victim, there is still an attitude of disbelief that anyone would share something so negative about their mother. This is laundry, whether dirty or clean, that should be tucked inside the washer never to be seen.
University of Canberra researcher Lucetta Thomas wants to change. She researched the topic with 23 men who shared their stories of childhood sexual abuse at the hands of their mothers.  In one case, a mother repeatedly abused her son. When the boy became old enough to physically stop his mother from raping him, she brought in an accomplice to hold him down. The man eventually committed suicide.

Read more »
Posted by Angelo Agathangelou at 12:38 am No comments: