Karen Straughan's "Why I Am Not A Feminist"

Groundwork For The Metaphysics of MGTOW: In this video I respond to Karen Straughan's "Why I am not a feminist" which I consider a spiritual response video to my "On The Absence of Anti-Feminism in the Anti-Feminist community."

Not too long ago I put out a video entitled “On The Absence of Anti-Feminism in the Anti-Feminist Community.” This video received absolutely no formal responses from anyone within the anti-feminist community that I am aware of. Further evidence of this is that I have not had any detracting comments in my video. Had there been some response done by an anti-feminist that I was not aware of, I would have suspected that some train of anti-feminists would have appeared in the comments to, at least, accuse me of not understanding the anti-feminist community. However, nothing of the sort has happened.

Read more »
Posted by Angelo Agathangelou at 11:36 pm No comments:

Read more »
Posted by Angelo Agathangelou at 4:43 pm No comments:

By Patrick Sawer: Judges are labouring under antiquated notions of chivalry in awarding women maintenance payments which extend years into the future, despite the fact that many divorcees go on to earn good salaries on their own, says a leading female peer.

A Bill tabled by Baroness Deech calling for a three year cap to be placed on most maintenance payments is to go to the Committee stage after passing its second reading in the House of Lords.
The cross bench peer says this would reflect the situation in Scotland, the rest of Europe and North America, where a short time limit is set on maintenance payments in divorce cases. Baroness Deech says that far from doing women a favour, the law as it stands in England is both patronising and stops them being treated seriously in the workplace.
The former chair of the Bar Standards Board told The Telegraph: "Our judges are being very old fashioned I’m afraid. They are over-chivalrous and the way they were in the 19th century. People wonder why, 15 years after a marriage has ended, one person has to keep paying money to another.
If there is one thing that stops women getting back on their feet and being treated seriously and equally at work, it is the assumption throughout the legal system that once a woman is married she is somehow disabled and incapable ever of managing on her own for the rest of her life. It is a very serious impediment to equality."

Feminism LOL: This would be endlessly funny if it didn't come at the cost of an innocent man's life. You could be next. Let's fix this shit.

Read more »
Posted by Angelo Agathangelou at 12:22 pm No comments:

The Old Man And The C Word

By Doug Mortimer: Although he has been dead since 1961, Ernest Hemingway remains a person of interest among students of American literature. As with any other celebrity, he was as famous for his private life as his professional life. Even in his day, his traditionally male pursuits (hunting, fishing, drinking, boxing) made him suspect in some circles. If the concept of toxic masculinity existed back then, rest assured it would have been applied to him. 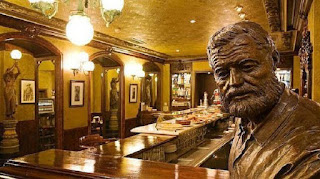 Indeed, at times he often seems like a caricature of a macho man. There is an amusing story about writer Max Eastman, who described Death in the Afternoon, Hemingway’s nonfiction work about bullfighting, as having “false hair on the chest.” The next time Eastman met Hemingway, the latter bared his shirt to reveal his hairy chest, then ripped open Eastman’s shirt to reveal a hairless chest. The two men then proceeded to brawl in their editor’s office. A pissing contest would have been much less taxing.
A number of literary critics, not all of them feminists, have examined Hemingway’s relationships with women. There is plenty of material, as he was married four times. As his son Gregory put it, “I was the third and youngest son, the product of one of my father’s emotional catastrophes. That is, one of his four marriages.”

Why Increased Consciousness Is The Only Path Forward

By Michael Krieger: We’ve all heard variations of the famous quote by Joseph de Maistre that: “Every nation gets the government it deserves.” I’ve spent the last decade or so rejecting this. After all, it’s hard for someone who has dedicated his life to flushing out the severe societal problems we face to accept that this is our destiny.

Fortunately, the framework of Spiral Dynamics has helped me see the truth in this observation, at least when it comes to America, where we have far more avenues for liberty than more autocratic nations. According to Ken Wilber in his recent e-book, Trump and a Post-Truth World: An Evolutionary Self-Correction, America’s descent into a parasitic, unhealthy, increasingly authoritarian society is a function of traffic jam in the evolution of consciousness that occurred due to the total failure of green level thinking to develop many of the initially positive realizations that sprung up in the 1960’s. As Wilber explains:
One of the paradoxical reasons that it is so important that our culture at large understand the general basics of a developmental view is that such an understanding would allow people to see the general limits of just how much they will be able to agree with each other in the first place.

Read more »
Posted by Angelo Agathangelou at 6:47 am No comments:

MGTOWN
Posted by Angelo Agathangelou at 4:34 am No comments: