'It’s over, folks, the deep state has won.
From now on, Trump will become
the proverbial shabbos-goy,
the errand boy of the Israel lobby.'
The Saker: Less than a month ago I warned that a ‘color revolution ‘ was taking place in the USA.  My first element of proof was the so-called “investigation” which the CIA, FBI, NSA and others were conducting against President Trump’s candidate to become National Security Advisor, General Flynn.  Tonight, the plot to get rid of Flynn has finally succeeded and General Flynn had to offer his resignation.  Trump accepted it.
Now let’s immediately get one thing out of the way: Flynn was hardly a saint or a perfect wise man who would single handedly saved the world.  That he was not.  However, what Flynn was is the cornerstone of Trump’s national security policy.  For one thing, Flynn dared the unthinkable: he dared to declare that the bloated US intelligence community had to be reformed.  Flynn also tried to subordinate the CIA and the Joint Chiefs to the President via the National Security Council.  Put differently, Flynn tried to wrestle the ultimate power and authority from the CIA and the Pentagon and subordinate them back to the White House.  Flynn also wanted to work with Russia. Not because he was a Russia lover, the notion of a Director of the DIA as a Putin-fan is ridiculous, but Flynn was rational, he understood that Russia was no threat to the USA or to Europe and that Russia had the West had common interests.  That is another absolutely unforgivable crimethink in Washington DC.

Max and Stacy discuss how Deutsche Bank made $462 million disappear through the magic of derivatives. In the second half, Max interviews Trond Andresen, who campaigned long ago to keep Norway out of the euro, to discuss the anti-EU mood across Europe and how the rancor could save the euro… should anyone want to save it.
Posted by Angelo Agathangelou at 9:18 pm No comments:

By Nat Godot: It is believed that a 19th century playwright was the first person to write that “the pen is mightier than the sword,”1 and that adage is probably more relevant now than ever before. Because in this modern age of false words he could just as easily have said ‘the pen is mightier than the truth.’ The ‘might’ he makes reference to after all is the very real power wielded by people who succeed in owning the meaning and use of words. 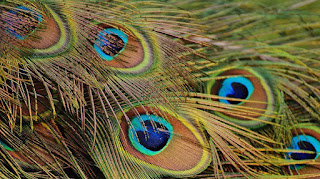 So it is very pertinent to the way that feminists have usurped their own cause. Which means that when we take on the burden of contradicting the dogmas of modern feminism we need to take back the meaning of words, and one of those words is power.
Feminists like to talk about power, but only to say that men have power and women do not. Or to say that men abuse power and women do not. But they make little or no acknowledgement of the powers owned by women to imprint newly born minds with responses that will benefit themselves, to reinforce those responses throughout the most vulnerable years of that young life, and then to call on those responses when it is beneficial for them to do so. Although many men feel themselves to be immune from those requests, the truth is that many of them who feel that way still allow their resolve to crumble when faced with a woman exhibiting or feigning distress.
So there is a form of power granted by nature which is enjoyed exclusively by women, and we need to shine more light on it.

By Omar Karmi: When the gods wish to punish us, Oscar Wilde once wrote, “they answer our prayers.”
Something like this now confronts Benjamin Netanyahu as he contemplates a future whose horizon would appear to have broadened significantly with the election of Donald Trump as US president.
Trump’s election should be a gift to Netanyahu: outside restraints on what Israel can do in the occupied West Bank and Gaza Strip and with the Palestinians have almost completely fallen away.
But the Israeli prime minister now has to decide how far his nationalist pro-settler coalition is prepared to go in dismantling decades of peace process logic – however little heed he has paid to it in the past. Israel’s far-right – comfortably in power at the moment with no serious domestic opposition – has never had it so good. The Middle East is in violent disarray, and Sunni-Shiite conflict and competition dominate a regional agenda down which the Palestinian issue has slid inexorably.
Palestinians themselves are divided and unable to put up a common front.
Trump, meanwhile, has promised to move the US embassy to Jerusalem, a step that would signal US acceptance of the Israeli claim to the city as its “eternal, indivisible capital.”

Read more »
Posted by Angelo Agathangelou at 10:20 am No comments:

Is Greece Really On The Verge Of Another Financial Crisis? 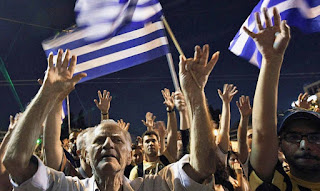 By Milton EZRATI: Just about every adult on earth has seen this show before. Greece faces a debt repayment that it cannot meet: for this performance, €86 billion due in July. It needs fresh bailout funds from the European Union and/or the International Monetary Fund because borrowing directly on global capital markets comes at too high a cost—10 percent to replace the maturing bonds. Germany, leading the EU, states that before Greece receives a single euro it must first commit to more severe budget policies. The IMF points out that Greece cannot possibly live up to Germany’s demands, and even if it did, the country would not be able to repay its outstanding debt burden, which at last count stood at 181 percent of Greece’s gross domestic product. The IMF goes on to hint that Greece may have to leave the eurozone. Throughout this familiar point and counterpoint, few focus on Greece’s need for the fundamental economic reforms that offer the country its only hope of using its own resources to meet its obligations.
Pretty much the same actors are playing the same roles as a couple of years ago, when Europe last staged this farce. Greek prime minister Alexis Tsipras has assumed his same initial tough stance toward Greece’s creditors, just as he did last time, before he caved into EU demands.

Read more »
Posted by Angelo Agathangelou at 8:06 am No comments: 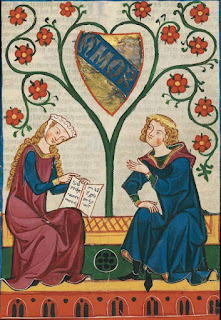 By Author Douglas Galbi: When in love with a woman, most men in their purity and innocence simply want to have sex with her. But life gets much more complicated. Consider, for example, the case of Hysminias in twelfth-century Byzantium. After enduring sexual harassment from Hysmine, Hysminias fell passionately in love with her. Yet before he could have sex with her, barbarians and Greeks enslaved him. To make matters worse, both the woman who owned him as a slave and Hysmine’s female boss amorously besieged him. Merely to kiss Hysmine, Hysminias had to engage in the fiction that he was kissing Hysmine’s female boss. As innocent men ruefully learn, real-world romance can be tragic.[1]
Hysminias had been in love with Hysmine for a year, yet he hadn’t fully realized his desire. Enslaved, he wept for his misfortune and mournfully recalled flirting with Hysmine. The Greek mistress who with her husband owned Hysminias asked him about his parentage and the story of his life. He summoned learning and eloquence amid his tears and responded:

Mistress, I am your slave; when you ask to know more you are asking for a whole play, a complete tragedy. I am the exemplification of Fate, a ghost from the underworld, the plaything of the gods, the Erinnyes’ banquet. [2]

Read more »
Posted by Angelo Agathangelou at 5:18 am No comments:

By Shahd Abusalama and David Cronin: King’s College London has given a misleading explanation about its investments in firms that supply weapons and their components to Israel and Saudi Arabia.
Over the past few months, students at the British university have been protesting at its financial connections to the arms industry. 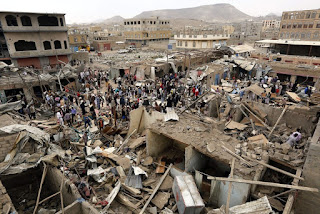 A group called Demilitarise King’s has researched how the college invests – via funds – in such companies as BAE Systems and GE. The group has calculated that King’s has invested more than £1.5 million ($1.9 million) in the weapons trade.
Rather than address the concerns raised by the group, the chief administrator at King’s has tried to fob them off.
“King’s College London does not have any direct investments in the arms trade,” Edward Byrne, the university’s president, told The Electronic Intifada. “We only invest through funds and in so doing seek to balance our financial objectives with wider societal considerations.”
Byrne added that King’s uses a fund run by the financial services firm BlackRock, which, according to him, “purposely excludes investment in companies that produce controversial weapons.”

Read more »
Posted by Angelo Agathangelou at 2:38 am No comments:

Gary Orsum: A man from Mackay in Queensland Australia was abused for feeding his 7 month old daughter in the parent's room.
Posted by Angelo Agathangelou at 12:18 am No comments: