Revisiting The Road To Wigan Pier 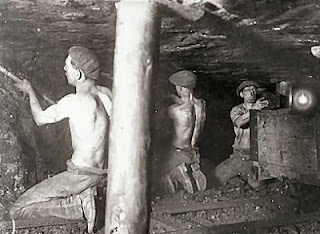 By William Collins aka MRA-UK: You can read The Road to Wigan Pier on-line free at Gutenberg-Australia.
Wigan Pier was a coal landing jetty on the Leeds-Liverpool canal where it passed through Wigan. It is an ironic appellation, Wigan’s Pier bearing no more relation to a seaside pier than a lump of coal to a diamond. The Pier does not actually feature in the book at all, for the simple reason that it had been demolished some years before Orwell visited Wigan. You, dear reader, would be luckier if you visited Wigan today for the Pier has been rebuilt – perhaps because the locals got fed up with tourist types asking the way to something which did not exist. I wouldn’t bother making a special trip if I were you.
Whatever Wigan might be like today, it was not beautiful in 1936. But, as a Mancunian, and hence on the Lancastrian side of the Pennines and thus in opposition to Yorkshire by long tradition, I note Orwell’s remark,
“Even Wigan is beautiful compared with Sheffield. Sheffield, I suppose, could justly claim to be called the ugliest town in the Old World.”
But enough frivolity…

6oodfella: After watching Bad Boys, and listening to Boys Of Summer, I was going to watch Boyz N The Hood, but then I decided to respond to Mayim Bialik's video about how men are never referred to as "Boys".

Read more »
Posted by Angelo Agathangelou at 7:21 pm No comments: Links to this post

By Mike Buchanan, J4MB: Regarding this piece in The Times. You’ll need to register but it won’t cost anything, and you’ll get access to two pieces in either The Times or The Sunday Times every week. Paul writes: 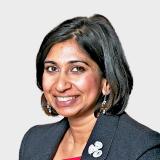 Something fairly extraordinary happened in the Commons yesterday evening, which made me do a bit of a double take!
Namely a former barrister (Conservative) called Suella Fernandes [right] brought forward a private members’ bill to radically overhaul the family justice system and give a ‘rebuttal presumption’ of shared parenting for fathers.
She was supported by quite a few Tory backbenchers (Charlie Elfick, Col. Bob Stewart, Cheryl Gillan were among the backers) and it was  completely unopposed at first reading.
She also held it up as a contingency plan if Baroness Deech’s excellent divorce laws reforms fail to gain statute.

Read more »
Posted by Angelo Agathangelou at 5:02 pm No comments: Links to this post

By Mike Buchanan, J4MB: Four months ago we posted a piece prompted by the fact that around 90% of the ‘people’ who commit suicide in prisons are men. I was appalled by a short piece on prison suicide in yesterday’s Times, by Frances Gibb, Legal Editor. An extract:

In 2015, women had a higher suicide rate than men for the first time since 2007, according to Nigel Newcomen, prisons and probations ombudsman.

I would guess most people reading that line would erroneously conclude that more women than men committed suicide in prison in 2015. At best, it’s sloppy journalism. And note the inference that it’s deemed acceptable when men have a higher suicide rate than women for eight years in succession, but it’s a cause for official concern when the position reverses in one year.
The bottom line? To the state – and possibly wider society – the suicide of one woman in prison is more noteworthy than the suicide of nine men. We get a sense of the size of the empathy gender gap right there.

The Unauthorized Biography Of David Rockefeller

David Rockefeller is dead. But what does it mean? How do we measure the life of someone who has shaped the modern world to such an extent? Corbett examines David Rockefeller's life, his works and the world that he left in his wake.
Posted by Angelo Agathangelou at 12:52 pm No comments: Links to this post

HoneyBadgerRadio
Posted by Angelo Agathangelou at 10:46 am No comments: Links to this post

“Israel is unethically and immorally exploiting the medical needs of Palestinian patients, making their transit for medical treatment conditional on [Israeli intelligence] questioning, in order to squeeze them for intel.” 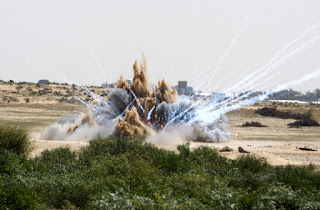 Right: White phosphorous munitions are destroyed in the southern Gaza Strip during a controlled demolition in March 2010. There are concerns that such Israeli weaponry has contributed to a spike in cancer rates in the territory. Yousef Deeb
By Sarah Algherbawi: Jihad is a boy with ambitions. “I want to grow until I become an astronaut and an engineer,” the 9-year-old said. “At the same time.”
Before he could achieve those goals, Jihad would have to recover from a major illness. About a year ago, he was diagnosed with cancer of the colon.
The diagnosis was made after he had been taken to hospital with food poisoning.

None are more hopelessly enslaved
than those who falsely believe they are free.
– Johann Wolfgang von Goethe 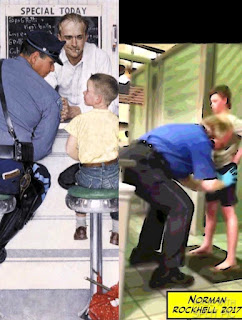 By Michael Krieger: TSA treating law-abiding American citizens like livestock for the privilege of boarding a plane has been a festering problem for over a decade. Such demeaning “security” practices represent just one of many unacceptable privacy invasions we’ve allowed to happen to us as a people since being overwhelmed by irrational fears of terrorism following the attacks of 9/11. Such fears are never allowed to dissipate since they’re constantly reinforced and encouraged by corporate media, hack politicians and the military-industrial-intelligence complex looking to make money from imprisoning Americans in an all-encompassing surveillance grid panopticon where we cheer on our own enslavement.

Read more »
Posted by Angelo Agathangelou at 6:16 am No comments: Links to this post

By August Løvenskiolds: The feminists tell us all the time that masculinity is a toxic thing, but what is the source of the poison? As a feminist booster and in honor of Women’s History Month I am compelled to study this question and take it to the logical conclusion.
A shocking new article in Cosmo by the aptly named Hannah Smothers, “Why Guys Get Turned on When You Orgasm — and Why That’s a Bad Thing” laments, “Of course guys manage to make YOUR orgasm about themselves.”

It turns out that, when a woman has an orgasm with a man (or fakes one with sufficient skill that the bed is soaked and the neighbors lodge complaints), something really, really bad happens – men derive a sort of secondary pleasure termed “masculinity achievement”.
Did I mention that this is a bad thing?
Such secondary male pleasure means, horribly, that a woman’s orgasm is not woman-centric enough to please the anorgasmic hags at Cosmopolitan. (They actually use the term “woman-centric” when “gynocentric” would have been a fine alternative.) When a man is happy, a woman must respond with annoyance. And the further genocide is that the female orgasm rewards and thereby encourages masculinity – the subtext being, of course, that masculinity is a really bad thing. You know, like toxic or something:

Read more »
Posted by Angelo Agathangelou at 4:19 am No comments: Links to this post

So When Women Take Photos With Their Kids Is OK...

Tommy Sotomayor
...But When Men Do It There's A Problem
Posted by Angelo Agathangelou at 2:56 am No comments: Links to this post