...Jailed For Seven Years As Judge Labels Her A 'Disgrace'
By Abe Hawken For Mailonline: A 'sex mad' mother who had group sex with underage schoolboys and told one she was pregnant with his child was today jailed for seven years.

Amanda Tompkins, 39, described by a judge as a being a 'disgrace', invited the group into her home where they were allowed to drink alcohol and take drugs.
The mother-of-three, from Milton Keynes, Buckinghamshire, was jailed for 10 counts of physical and sexual abuse with six boys at her home while they were aged between 13 and 15 years old.
Aylesbury Crown Court heard that Tompkins' youngest children were also inside the property while she had sex with the teenagers.
After engaging in sexual intercourse and oral sex with the boys, the 'highly sexual woman without boundaries' claimed to one of them he had got her pregnant and that she needed to get an abortion.
The court heard she would let the teenagers drink and smoke cannabis in her home before preying on them after performing a striptease.
Read more »
Posted by Angelo Agathangelou at 10:10 pm No comments: Links to this post 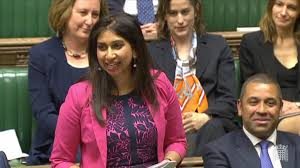 By William Collins aka MRA-UK: Something rather remarkable happened in the House of Commons last Tuesday (28th March 2017). Suella Fernandes, Conservative MP for Fareham, presented her proposals for a Private Members Bill on reform of Family Justice. The proposals – reviewed below – are hard-hitting, surprisingly so for an initiative emerging from within Parliament. They have received the blessing of Fathers4Justice (F4J) and Families Need Fathers Both Parents Matter Cymru (FNF-BPM), though not all parties are as impressed, e.g., the Transparency Project (however, see the Comment by Lucy Reed, below).
This comes hot on the heels of Baroness Deech’s Bill “Divorce (Financial Provision)“. (This latter Bill started in the House of Lords where it is now at the Committee stage).
There is every reason for UK readers to sit up and take notice – and perhaps take action (more of which below). However, lest we all get carried away on a tide of optimism, let’s inject some realism straight away. Private Members’ Bills rarely make the statute book (the Bill to ratify the Istanbul Convention is a rare exception – and even that may not be the plain sailing I had assumed). It is by no means the first time that the idea of actual justice in the family courts has been voiced as a possibility in Parliament (shock horror).

Read more »
Posted by Angelo Agathangelou at 6:49 pm No comments: Links to this post

Is The Russian Government Insouciant?

By Paul Craig Roberts: On March 1 the US National Reconnaissance Office launched a spy satellite carried by an Atlas V rocket that was powered by a Russian RD-180 engine.  http://www.counterpunch.org/2017/03/31/the-beneficiaries-of-conflict-with-russia/
The Unites States, an alleged “superpower,” is not capable of putting its own spy satellites into space. The “superpower” is dependent on Russia, which provides the “superpower” with the rocket engines to put up spy satellites to spy on Russia!!! http://www.foxnews.com/science/2014/07/17/us-too-dependent-on-russian-rocket-engines-experts-tell-lawmakers.html

Here we have in Lenin’s words, the Russians selling Washington the rope with which to hang Russia!
Does Russia value a few more US dollars more than it values its national existence? Apparently so.
Do the Atlanticist Integrationists, the Washington funded and supported Fifth Column inside Russia, inside the Russian media, and inside the Russian government, so much desire to be part of the decadent and immoral West that they are willing to sacrifice Russian sovereignty and are willing, like all of Europe, Canada, Australia, and Japan, to be Washington’s vassal? Yes.
What other explanation is there for Russia enabling Washington to spy on Russia and to have the capability compliments of Russia to target Russia with nuclear weapons in a pre-emptive nuclear attack?

Read more »
Posted by Angelo Agathangelou at 2:06 pm No comments: Links to this post

Ken Livingstone And The Primacy Of Jewish Suffering

'We need to know when and why our Labour Party and the Left closed the door on Athens and opened the door to Jerusalem?'

By Gilad Atzmon: In a previous piece, I noted how the British Labour Party had departed from its traditional values. But if it is no longer truthfulness or ethics that motivate the Labour Party, what is it that drives the current crusade against Ken Livingstone?
Karen Pollock, chief executive of the Holocaust Educational Trust provides a possible answer. "Even when it has been made blatantly clear that his comments have caused deep hurt and offence to Jewish people, and in particular to Holocaust survivors, still Ken Livingstone has persisted down this route - repeatedly invoking the Holocaust, promoting a misleading and misinformed version of history to further his agenda.”
For Karen Pollock, a true Holocaust industry apparatchik, truth and historicity or any other recognised value are all subservient to Jewish sensitivities.

My Mother The Sociopath

Each person decides in early childhood how he will live and how he will die… His trivial behaviour may be decided by reason, but his important decisions have already been made: what kind of person he will marry, how many children he will have, what kind of bed he will die in… It is incredible to think, at first, that man’s fate, all his nobility and all his degradation, is decided by a child no more than six years old, and usually three… (but) it is very easy to believe by looking at what is happening in the world today, and what happened yesterday, and seeing what will happen tomorrow. Eric Berne1

***
By Jim Thompson: This quote from Eric Berne is astonishingly accurate, at least as it applies in my own life. It rings eerily and hauntingly true in my mind; something that I will return to later.
We can ask, or should ask, what environmental influences could encourage a child to formulate a future life pattern with such a degree of inevitability?  What positive or negative role models and parental guidance or abuse, would result in such a powerful, life determining decision?

Read more »
Posted by Angelo Agathangelou at 10:00 am No comments: Links to this post

Moscow And Beijing Join Forces To Bypass US Dollar In Global Markets, Shift To Gold Trade

By Tyler Durden: The Russian central bank opened its first overseas office in Beijing on March 14, marking a step forward in forging a Beijing-Moscow alliance to bypass the US dollar in the global monetary system, and to phase-in a gold-backed standard of trade.
According to the South China Morning Post the new office was part of agreements made between the two neighbours "to seek stronger economic ties" since the West brought in sanctions against Russia over the Ukraine crisis and the oil-price slump hit the Russian economy.
According to Dmitry Skobelkin, the deputy governor of the Central Bank of Russia, the opening of a Beijing representative office by the Central Bank of Russia was a “very timely” move to aid specific cooperation, including bond issuance, anti-money laundering and anti-terrorism measures between China and Russia.
The new central bank office was opened at a time when Russia is preparing to issue its first federal loan bonds denominated in Chinese yuan. Officials from China’s central bank and financial regulatory commissions attended the ceremony at the Russian embassy in Beijing, which was set up in October 1959 in the heyday of Sino-Soviet relations. Financial regulators from the two countries agreed last May to issue home currency-denominated bonds in each other’s markets, a move that was widely viewed as intended to eventually test the global reserve status of the US dollar.

Read more »
Posted by Angelo Agathangelou at 8:11 am No comments: Links to this post

Who Brought The Slaves To America? - Documentary

Zionist Report: This documentary is inspired directly by the book, "Who Brought The Slaves To America?" - profound, short, and to the point. Western textbooks, en masse, falsely proclaim Christians are only responsible for the enslavement of both the Native American Indians and the African Black people in the name of Jesus Christ. - The book "The Secret Relationship between Blacks and Jews" revealed that Jews and not true Christians, were responsible for the enslavement of Blacks and American Native Americans. This documentary leaves no doubt of the Jewish involvement and control over the Atlantic slave trade.

Read more »
Posted by Angelo Agathangelou at 6:21 am No comments: Links to this post

Greer Admits Central Thesis Of ‘The Female Eunuch’ That Most Men Are Misogynists - Was A Fabrication, A Lie

By Mike Buchanan, J4MB: I’ve just had a call from a lady supporter to say she heard an interview of Germaine Greer on BBC radio this morning, and she assumed I’d heard about it. I hadn’t – surprisingly, with hindsight. 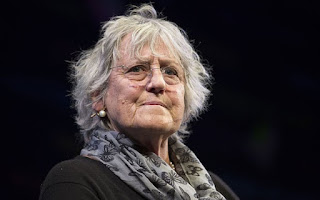 Ms Greer admitted that the central thesis of The Female Eunuch (1970) – that most men are misogynists – was a fabrication, a lie. She went on to say she’d been utterly amazed when it was widely believed and became influential, and went on to say something along the lines of, ‘It’s self-evident that most women hate men as a class, and of course all feminists do, it’s one of their defining characteristics’.
It’s been 45 years since the damnable book was published, but we tip the hat to Ms Greer for finally admitting the truth. Better late than never.

Read more »
Posted by Angelo Agathangelou at 1:58 am No comments: Links to this post