The Dumbest Thing To Ever Come Out Of Harvard?

"There isn't more than two sexest, that's fucking bullshit!"
The dumbest thing to ever come out of Harvard?? Regards, Bearing.
Read more »
Posted by Angelo Agathangelou at 11:10 pm No comments: Links to this post 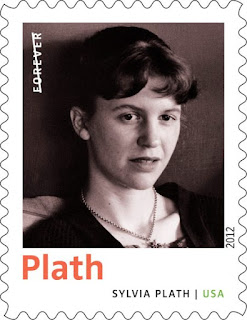 By Author Douglas Galbi: In eleventh-century Constantinople, the leading intellectual Michael Psellos wrote an encomium for his dead mother. At the literal and interpretive center of Psellos’s Encomium is the story of a prostitute. It’s an allegory for the deathly effects of socially devaluing men’s heterosexuality. Under gynocentrism, one must praise the great mother. In his inner wisdom, Psellos came to bury the gynocentrism that so many honorable scholars have championed. “Father, father, you savior, I’m through.”
Michael Psellos’s sister befriended a prostitute. Many men, including noble men, paid this women for having sex with her. Men paying for sex indicates the extent to which Byzantine society wasn’t adequately providing men with sexual fulfillment. Acting to further men’s sexual disadvantage relative to women, Psellos’s sister sought to make this woman unavailable to men at any price. Psellos recounted:
My sister censured her often, reproaching her licentiousness and condemning her obscene behavior, and finally ordered her to go and live far away. [1]

De Pulice: Women Can Sleep Either With Fleas Or With Men 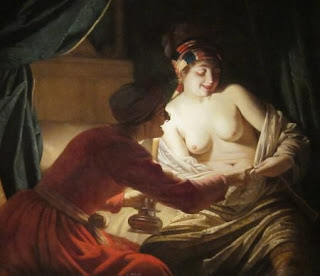 By Author Douglas Galbi:  Criminalization of men desiring women undermines men’s self-confidence and contaminates their love with fear. These effects are starkly apparent in comparing Ovid’s Amores (Loves) 2.15 to a twelfth-century recasting of it, De pulice (The Flea). Women who love men must strive to understand and counter the unsympathetic social construction of men.
Ovid’s Amores 2.15 reveals a man’s thoughts about his gift of a precious ring to a woman whom he loves. Ovid, a master of the art of love, surely knew that men need not actually give women expensive gifts in order to enjoy love with them. Yet many men throughout history have felt the need to pay for sex. Emphasizing the commodification of men’s love, Ovid’s lover closely identifies his inanimate gift with the gift of his own masculine sexuality:

The Jewish Fascination With BBQ


By Gilad Atzmon: Yesterday we learned that Israeli right-wing activists threw a free barbecue outside a military prison in the West Bank, where Palestinian inmates are currently taking part in a mass hunger strike. Such a barbarian act is pretty revealing. It points to the Israeli activists’ complete lack of human empathy and compassion.

Read more »
Posted by Angelo Agathangelou at 5:11 pm No comments: Links to this post

From every side of the debate people offer differing definitions of what ‘feminism’ is, with feminists themselves pointing to glib dictionary definitions, and antifeminists preferring to define it as a female supremacy movement. A hundred more definitions could likely be offered, but more important is the question of whether these different definitions hold anything in common?
Here Adam Kostakis answers this question in the affirmative with an elegant definition that most would agree with. – PW

By Adam Kostakis: Even essentially contested concepts, as W. B. Gallie referred to them, must have meanings which are greater than normative, else communication about them would be rendered impossible. That is – there must be some amount of general consensus over what feminism is, between feminists and anti-feminists, or we would not be able to argue about it! Even despite the differences between a feminist’s view of feminism and of our own, some shared content must exist at some level, or we would be talking about entirely different things. They might be talking about the feminist movement, while I am talking about horse-rearing, although we both refer to our respective subjects as ‘feminism’ – but we wouldn’t have much to say to each other, would we, if this were the case?

By Leon Rosselson: In the current furore over supposed antisemitism in the Labour Party and the suspension of Ken Livingstone for asserting that Hitler supported Zionism, the crux of the problem seems to have been somewhat obscured. Livingstone’s intervention was untimely, uncalled for and clumsily expressed (it’s never a good idea to bring Hitler into the discussion) but the collaboration in the 1930s between Zionist leaders and Nazi apparatchiks, like Eichmann, is a historical fact. How was that possible? How could a Jewish ideology find common ground with a virulently antisemitic creed — and at a time when Jews worldwide were demanding a total boycott of Nazi Germany?

So good were the relations between the Zionist movement and the Nazis that after the Head of the Jewish Desk at the Gestapo, Baron von Mildenstein went to Palestine for 6 months in 1933, at the invitation of the Labour Zionist movement, they struck a medal in celebration of their good relations
Anyone who has been in a Zionist youth movement — Habonim or Hashomer Hatzair — will know that the job of Zionism is to persuade Jews that they don’t properly belong in the countries in which they have lived over the centuries and can only find their true home in a Jewish state.

Zionist Report: It was 1939 and this priest did what he was supposed to do! Not too many have heard of him and we wonder why, since he spoke the truth! Could that be the reason?
Posted by Angelo Agathangelou at 2:17 am No comments: Links to this post

Why Does North Korea Want Nukes?

Under no circumstances could any westerner reasonably expect, that the North Korean regime would simply submit to any ultimatums by the US regime.


We are fighting in Korea so we won’t have to fight in Wichita, or in Chicago, or in New Orleans, or in San Francisco Bay.
— President Harry S Truman, 1952 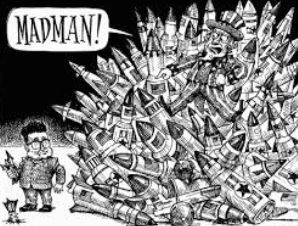 By Paul Atwood: Why has this tiny nation of 24 million people invested so much of its limited resources in acquiring nuclear weapons? North Korea is universally condemned as a bizarre and failed state, its nuclear posture denounced as irrational.

Yet North Korea’s stance cannot be separated out from its turbulent history during the 20th Century, especially its four decade long occupation by Japan, the forced division of the Korean peninsula after World War II, and, of course, the subsequent utterly devastating war with the United States from 1950-1953 that ended in an armistice in which a technical state of war still exists.